END_OF_DOCUMENT_TOKEN_TO_BE_REPLACED

You don't need to fear hyperinflation to Buy Gold – it represents an excellent hedge against prolonged deflation too...

GOLD HAS produced a multi-year stream of thoughtless op-eds and repetitive storytelling – very much reminiscent of oil coverage in the period 2000-2008. Recall how many times the bull market in oil was dubbed "over" leading up to the crisis of 2008. Gold meantime has been in a "bubble" for at least as many years, if not longer, writes Gregor Macdonald for ChrisMartenson.com

The seminal piece to this genre was Willem Buiter's November 2009 Financial Times of London essay, Gold – A Six Thousand Year Bubble. That piece would be used as a template by other, lesser writers in the two years that followed. Consider this 2010 tracker-chart of opinion, emanating this time from New York: 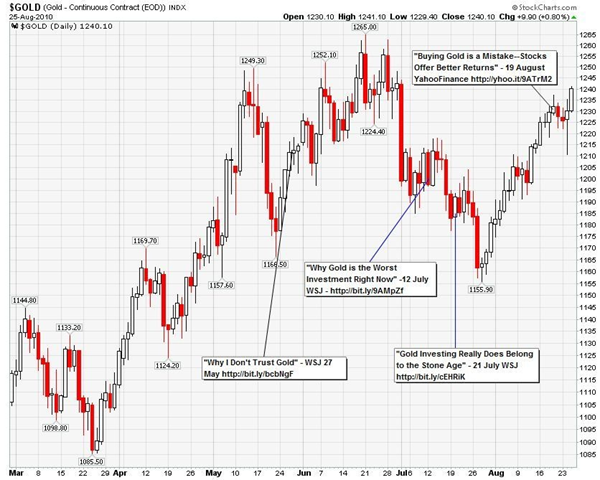 By 2011, one wondered if the large, national newspapers were capable of offering something more thoughtful on gold. This autumn, we were finally treated to an intelligent, non-derivative analysis, from an unlikely source: Paul Krugman of the New York Times.

Paul Krugman's partisan columns in the NYT have been a great disappointment to me in the years since he took the job. However, I encourage readers to read Krugman's earlier work. An easy entry to Krugman's theoretical view would be to simply watch the video of his 2008 Nobel Prize acceptance speech. His work on Trade was (and remains) brilliant.

By contrast, his newspaper work as a columnist has been a constant source of frustration. Krugman has used his NYT column regularly in service to a political partisan cause, forgiving liberal figures for the same transgressions with which he has attacked conservative figures. Moreover, his advocacy of a generalized, untargeted Keynesian response to the ongoing economic crisis has become quite tedious.

But that is a subject I wish to handle in a future report. For today, I want to address Krugman's ability to blow past most of his peers when he chooses, freely addressing just about any issue that captures his attention. His recent posts on gold and economic decline offer a clarifying portrait of our current dilemma. Also, I suspect that fewer have paid attention to these partisan-free or as Krugman calls them, "wonkish" postings, and frankly, I'm grateful to have his valuable insights.

A source of constant disagreement with regards to gold's price behavior is whether the overall condition of inflation or deflation provides the most fertile ground for the yellow metal. By creatively using the work of Harold Hotelling, however, Krugman is able to tease out of gold's decade-long run and also its post-2008 run a rather different interpretation for gold's strength.

But first, a word on Hotelling. Earlier this year, I addressed the implications that Harold Hotelling's views had for gold and the overall environment for investment in a post-credit-bubble world. The following is from my March 2011 post, Gold, Infinite Debt, and the Problem of Capital Storage: Has the Hotelling Moment Arrived?:

The migration of capital, between the world of natural resources and the world of finance, has been addressed by any number of thinkers, one of the more compelling being Harold Hotelling. Writing in the Journal of Political Economy in 1931, Hotelling proposed that a rational producer of resources would only be inclined to extract and sell that resource if the investment opportunities available with the capital proceeds were greater than simply leaving that resource to appreciate in the ground. So, given Hotelling's theory of resource extraction, what has happened to gold production since the year 2000? Does the chart (the decline of gold production in the face of strong prices) reflect geological and cost limits to increasing gold production, even as the price rose from $250.00 to $1000.00 per ounce? Or, has there been some moderate yet gathering decision on the part of global gold producers to extract gold more slowly? After all, why extract gold to merely convert gold into paper currency, beyond the need to pay for the cost of production and provide, say, a dividend to shareholders? In other words, at the rate at which the price has been rising, why hurry to extract the gold?

In contrast to my take on Hotelling's theory, in which I consider the prospect of gold from a producer's point of view, Krugman's recent post looked at the price of gold from an investor's point of view. By doing so, I think Krugman is broadening Hotelling's theory, possibly beyond Hotelling's specific intent. But I don't mind. I think Krugman is spot-on in his analysis. In his terrific September 6, 2011 post, Treasuries, Tips and Gold, Krugman writes:

So what determines the price of gold at any given point in time? Hotelling models say that people are willing to hold onto an exhaustible resource because they are rewarded with a rising price. Abstracting from storage costs, this says that the real price must rise at a rate equal to the real rate of interest, so you get a price path that looks like this: 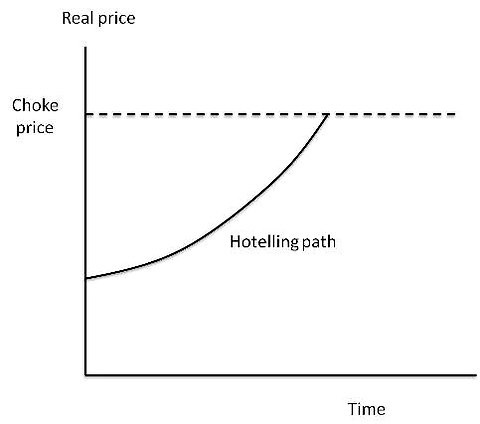 Now ask the question, "What has changed recently that should affect this equilibrium path?" The answer is obvious: There has been a dramatic plunge in real interest rates, as investors have come to perceive that the Lesser Depression will depress returns on investment for a long time to come... What effect should a lower real interest rate have on the Hotelling path? The answer is that it should get flatter. Investors need less price appreciation to have an incentive to hold gold.

But if the price path is going to be flatter while still leading to consumption of the existing stock — and no more — by the time it hits the choke price, it's going to have to start from a higher initial level. So the change in the path should look like this: 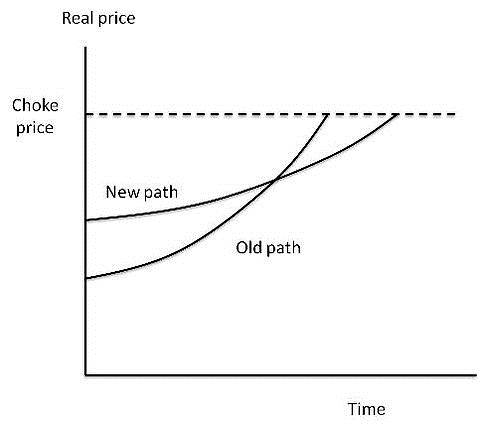 For this is essentially a "real" story about gold, in which the price has risen because expected returns on other investments have fallen; it is not, repeat not, a story about inflation expectations. Not only are surging Gold Prices not a sign of severe inflation just around the corner, they're actually the result of a persistently depressed economy stuck in a liquidity trap — an economy that basically faces the threat of Japanese-style deflation, not Weimar-style inflation.

Krugman's view matches my own that gold is a winning investment in a period of economic nay, systemic decline. Contrary to the misguided view that gold is in a bubble, gold actually becomes, and is continuing to become, the more stable asset in an investment universe that has entered secular contraction. It is the deflating of the credit bubble and the instability this presents on a chronic basis to the financial system that have attracted capital to gold.

Gold, meanwhile, also has flaws. Primarily, it continues to travel and exist in a Dollarized world. As we witness every so often, speculators and traders in gold often have to sell their gold positions as they retreat into their own respective currencies. Usually this is to cover other obligations, often denominated in US Dollars. Until gold, not the US Dollar, becomes the marker or the numeraire for transactions and trade, this oscillation in gold's price behavior will continue. That oscillation will be large enough, understandably, to make many observers conclude that gold is merely a speculative asset and (once again) nothing more than another bubble. As always, misunderstanding provides opportunity, and I marvel at how little commentary has been made on Krugman's lucid insight. He has clearly explained a very solid thesis for why gold will likely outperform and again, for free.

It is probably less the case, however, that Krugman and other Keynesians fully accept a resource-constrained model of the economy. Accordingly, I suspect Krugman, while currently frustrated with a political process that won't stimulate enough through government spending, does not foresee long-term decline for Western economies. I, however, do.

In contrast to the Keynesian view, I don't believe further stimulus programs will have anything other than a humanistic impact on Western economies, reducing the pains of adjustment. Pain reduction is not to be dismissed, just recognized. Equally, austerity programs suffer from the same analytical failure (or hope) because they, too, rest upon the idea that new resources energy, mainly can be brought forth cheaply enough to kick-start economic growth in the OECD. Also, austerity programs propose that the system can endure a liquidation phase and then recover. I'm not so sure. In fact, I doubt it very much.

Regardless of which model of decline we choose to employ, I think it makes sense just to mention a few here. There is Joseph Tainter's concept of diminishing returns to complexity, in which cultures and economies eventually have to devote so many resources just to maintain their elevated level of complexity that they enter decline. There is Frederick Soddy's concept of debt growth that outpaces the ability of the economy to repay it because it can no longer convert natural resources fast enough. I would also reference Jared Diamond's work on collapse, which probes history for real-world examples of systemic breakdown. And finally, there is the more mainstream work of Reinhart and Rogoff, which, using a comprehensive study of financial crises, suggests that the Western world is in for a long, tough slog.

That our current moment in the West maps so well to these models is fairly clear now to me, though this is still news to most. However, if one accepts these decline models, then the efficacy of gold is crystallized as a wager on further decline.

Buying Gold? Make it easier, cheaper and safer – including storage in your choice US, UK or Swiss professional vaults – with BullionVault...