END_OF_DOCUMENT_TOKEN_TO_BE_REPLACED

Decoupling was the great, failed hope of the global downturn in 2008. And now...?

Let's see if the world – especially the developing/emerging economies – can carefully extricate themselves from the fiscal tar baby in Washington DC. It's rewarding for doing so will be economic growth that's not depending on growing American debt. The future will be right and everything will be fine.

That's one story line, anyway. Last time it was offered up as a global narrative, it was exposed for being wishful thinking. The world's financial markets were too interlinked and the world's economy too dependent on American consumption for the planet to escape the subprime housing bust. Surely this time is different.

Well, maybe it is. For one, its two years down the track. And just this week China's purchasing managers index moved into bullish territory. This is, by wire service accounts, a sign that China doesn't necessarily need America to be China. We'll see about that. China's manufactured goods have to be exported somewhere, or consumed internally. Has that model been rebalanced in the last two years?

While we're on the subject of China, it appears a great number of buildings are being put to death prematurely for the sake of building new ones. It's a kind of controlled demolition carnival that generates new demand (stimulus!) Building glassy new edifices is stimulating, especially for building materials like cement and steel. You can find the full story over at China Hush, filled with pictures like this one... 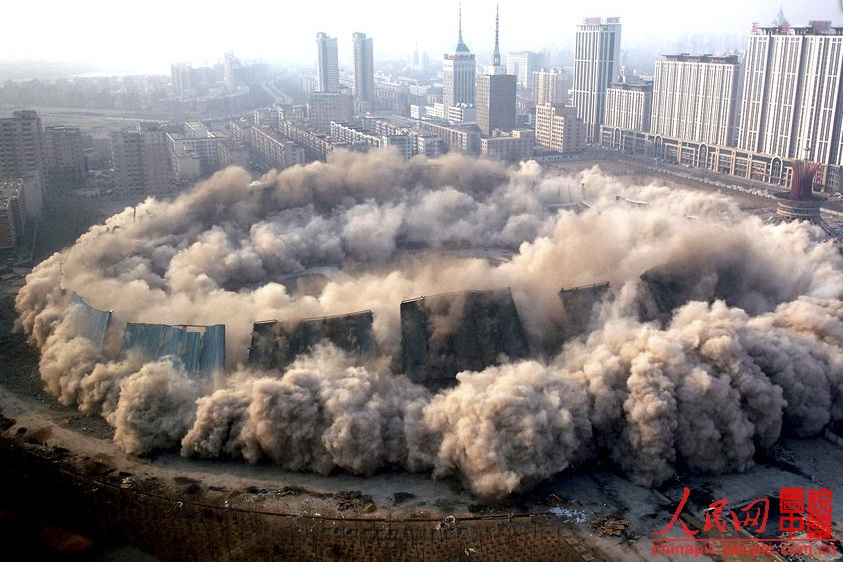 But does this picture really show what it purports to show? That is, is it really what it seems?

The article suggests that some of the construction boom in China (which drives Aussie resource demand, the price projections for which the government still hasn't released) is activity for its own sake. It amounts to busy work designed to keep people employed and keep GDP figures ticking over.

To be fair, we have no idea if that's true. China is a big complex country. Growing economies have a habit of bulldozing old buildings and factories and putting new ones up instead. It's only weird and unproductive...or worse still, a sham...if you're destroying new buildings in order to put up an even newer building.

Whether or not China's construction boom is grounded in reality or is a derivative of the great global credit bubble is one of those open questions that seems to have vanished from the public debate. For example, today's papers are full of stories about the RBA and interest rates. Blah blah blah. It seems like you'd want to know if the chief destination for your exports was headed for a bubble implosion or not.

In financial markets, maybe October is the month we'll find out if the global economy has decoupled from the American engine. Economist John Hussman thinks the current market is a Fed-driven Ponzi scheme designed to distract investors from a mountain of delinquent debt. In a recent note to clients, Hussman wrote:

"The US financial system appears to be a nicely painted dam, behind which a massive pool of delinquent debt is obscured. A significant correction in valuations and resolution of the growing backlog of delinquent debt may finally restore strong 'investment merit' to the US stock market, but only after a greater amount of pain and adjustment than most investors seem to anticipate."

Hussman went on to contend that people never prepare fully enough for a crisis. We all think we're smart enough to head for the exits early – before getting crushed in a bottleneck at the door. Hussman writes that:

"In countless situations people prepare exclusively for near-term outcomes and don't look very far ahead. They myopically discount the future at an absurdly steep rate."

Applied to Australia, people are diligently preparing for the near-term outcome of higher interest rates. But the future holds some far bigger risks, one big one (debt default or devaluation) from America and one big one (bursting credit/real estate bubble) in China.

How do you prepare for those outcomes? Well, for one, you probably don't want to discount them at such "an absurdly steep rate". Economists are already back to voicing mealy mouthed platitudes about the recovery and the health of the financial systems.

These are the same clowns who missed all the warning signs up to 2007.

Buy Silver and gold at the lowest costs possible, and store them in the very safest locations anywhere on earth at the mining-backed, award-winning world No.1 BullionVault...