END_OF_DOCUMENT_TOKEN_TO_BE_REPLACED

This is the worst post-WWII slump because it's tackling what started after 1945...

WHERE WE ARE NOW is a matter of great debate: Are we in recovery? Or is the depression deepening? asks Bill Bonner in his Daily Reckoning.

No one knows for sure. Investors stumble around in the dark, bumping into data and knocking over lamps. It would be nice if someone would turn on the lights. But that's not how it works.

The best we can do is to try make out the shapes of the biggest pieces of furniture in the room. What else is out there? We don't know.

Broadly speaking, the period we are in is deflationary. It is a period of credit contraction (at least in the private sector), de-leveraging and depression. How can we be sure? Well, let's turn on the lights...

Take a look at this chart, for example. What it shows is not a 'jobless recovery.' It shows no recovery at all. 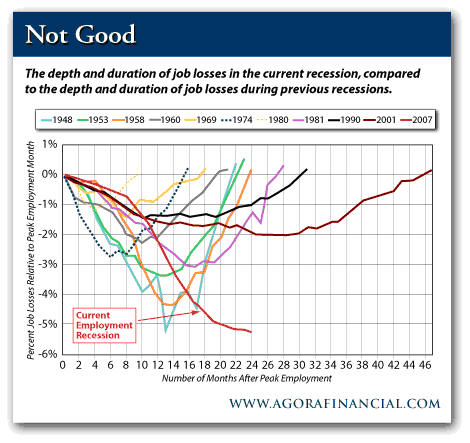 This slump is worse than any since World War II because it is correcting an expansion that dates all the way back to 1945. Credit began increasing right after the war. It kept increasing until 2007.

Then, in the private sector, it began going the other way. And that trend continues. 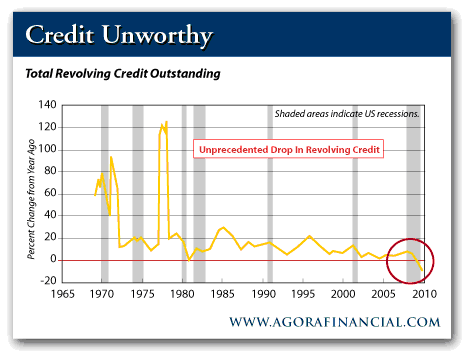 It makes sense from a theoretical point of view, too.

Every big credit expansion is followed by a big credit contraction. As credit expands, more and more mistakes are made. You can see how this works by looking at the mortgage industry.

The first borrowers were solid. Subsequent borrowers were not-so-solid, but they were still generally reliable. The last borrowers – at the height of the frenzy in 2006 – often had no jobs, no income, and no plausible way of repaying their mortgages. Those mistakes are now being corrected.

Overall, credit is still expanding – thanks to the US federal government. But credit is contracting sharply in the private sector...where it counts most. Business lending is falling at a 16.6% rate...the steepest plunge since 1948 (when businesses stopped borrowing for war production). But government borrowing is more than making up for the shortfall in private borrowing. Overall, credit- market debt is up 5.5% in the seven quarters since the business cycle peak in December 2007.

We can anticipate how this crash in public debt will come about. This passage, from a brief account of French financial history called The Undying Debt by Francois Velde, is a story of the past. It may also be a story from the future:

With the opening of hostilities [in WWI], the Bank of France suspended the link between Francs and gold, and part of the war was financed with large issues of paper currency.

When France's prime minister Poincare re-established the link in 1928, he could only do so at 20% of its pre- war parity...

In other words, the French got into a fix. They got out by defaulting on 80% of their obligations.

The history of French financial management is not so different from that of any other nation. Time after time, France found itself a little short. And time after time, it defaulted...devalued...and reneged on its promises. Over nearly three centuries, a government debt equal to ten ounces of gold – with a present value of about €7,850 – was reduced, says Velde, to €1.20.

That's about "enough to buy a café crème at the bistro on the way out from the Finance Ministry." (We don't know which bistro Velde is talking about. A café crème in Paris usually costs twice as much.)

Under these conditions, I'm not sure we can come to any useful conclusions about how one price will move relative to the others. Which will go down most, the Dollar or the Euro? Will copper rise in Dollars? Or fall against cotton? Will bond prices go up before they go down? We can't say.

But we can say that governments are very good at borrowing...and not so good at re-paying. So even if credit-contraction and deflation is the trend of the moment in US financial markets, government credit-creation is rapidly expanding...and that's inflationary.

That's why we are wary of government debt. We own no US Treasuries...nor any other form of government obligation. Shorting US and European government bonds is probably a good speculative play.

The official jobless numbers tell us that 10% of the workforce is unemployed. But here at The Daily Reckoning mobile headquarters, we don't believe any statistic...not unless we twisted it ourselves. Even then, we have our doubts.

Likewise, the latest statistics on housing were mixed – one up, one down. And now comes news that the number of used houses sold in December was disappointing – down 7.6% from a year before. The Washington Post says a housing recovery could take a decade. They're optimists at the Post. Most likely, there will be no recovery to Bubble-Era levels in our lifetimes.

Of course, that is not what the President of the United States of America thinks. He believes a recovery is underway...and that he can now take action to reduce the feds' stimulus. He's announced a partial spending freeze. This spending freeze is not exactly glacial. It's more like a spending breeze. Over the next 10 years it's expected to trim $250 billion from federal spending. Yet, the budget deficit for this year alone is $1.35 trillion. The cuts are negligible, in other words.

Just as we expected. The feds can talk the talk. But they can't walk the walk. Instead, they stumble from one error to a bigger one. From inciting a credit riot in the private sector...they've moved on to instigating a credit revolution in the public sector. When it is finally over...many nations will be broke...and the dollar will be worth a fraction of what it is worth today. What else could possibly happen? Well, nothing that we can see now. But there are always surprises, aren't there?

Most economists think the recession is over. And more investors think there is a bull market on Wall Street, and they expect it to continue. They are all going to be surprised. We are in a depression. It will cause stocks to fall again...probably pushing below their lows of March '09, down to the final bottom.

How can we be so sure? Well, we're not sure of anything. It's just an educated guess. Markets tend to oscillate between fear and greed over long periods of time. In the greed stage, credit generally expands. In the fear stage, it contracts. Obviously, there's a lot more to it than that. But people are, grosso modo, either optimistic and expansive or they are depressed and hunched over.

That's why August 1982 was such a great opportunity. BusinessWeek announced that the outlook for stocks was so bad it was the "Death of Equities". Death is about as bad as it gets. It couldn't get worse. So, it got better – a lot better, with stocks up 11 times over the next 20 years.

Then at the end of the '90s, a similar announcement was made about gold. We can't remember the source; perhaps it was Newsweek magazine that pronounced gold 'dead' as an asset class. Then, what do you know? Gold rose from the dead and outperformed stocks by five to one.

What's so dead now it's beginning to stink? The only thing we can think of is Japanese stocks. Every time we mention them, readers write to ask if we've lost our mind.

The Japanese are growing old. They are up against not just a retirement crisis; they face extinction. They are not just figuratively dead...but literally dead. The government is headed toward monster debts...with no way to finance them. Already, they borrow more than a dollar for every dollar of tax receipts. Besides, the Chinese work cheaper. And the Chinese have the same technology...and the same access to capital...and a much bigger market.

As if to prove that Japan is dead, Toyota seems to have fouled up its accelerator mechanism. According to press reports, some Toyota automobiles go faster and faster even when you tell them not to. Drivers do not like that kind of insubordination. Only vulture lawyers do. So Toyota has had to shut down its assembly lines in order to mitigate the damages. So investors took a whack at Toyota shares yesterday; they fell 9%.

Is it the end of the road for Toyota...and for Japan?

Probably not. But we wait to see what happens...just like everyone else.