END_OF_DOCUMENT_TOKEN_TO_BE_REPLACED

Dedicated to debasing the Dollar, politicians & central bankers are losing to Gold...

The UNITED STATES is dedicated to debasing its currency, the US Dollar, writes Dr.Marc Faber of the Gloom, Boom & Doom Report in Bill Bonner's Daily Reckoning.

There is a risk in holding cash in an environment of asset price inflation – a condition that usually occurs when governments create large fiscal deficits and inflate the money supply. The practice is endemic to banana republics and declining empires...and it is happening in the US at this very moment.

The global recession and financial crisis have refocused attention on government stimulus packages. These packages typically emphasize spending, predicated on the view that the expenditure 'multipliers' are greater than one – so that gross domestic product expands by more than government spending itself. Stimulus packages typically also feature tax reductions, designed partly to boost consumer demand (by raising disposable income) and partly to stimulate work effort, production and investment (by lowering rates).

The existing empirical evidence on the response of real gross domestic product to added government spending and tax changes is thin. But the evidence is quite strong that these policy responses usually trigger inflation.

I suppose that even someone without any common sense might understand that a "strong currency" over longer periods of time reflects a high degree of prosperity and economic success, whereas a chronically weak currency is symptomatic of economic imbalances, such as a lack of competitiveness or overconsumption, arising usually from excessive supply of money and credit.

I would also suppose that even if someone never travels overseas, he would understand that if the US Dollar loses 50% of its value against all the other world currencies (everything else being equal), it means the US is 50% poorer relative to the rest of the world. (Now, this is not entirely correct, since the US has overseas assets that would appreciate in value in USD terms).

Moreover, stock price movements become extremely volatile and erratic in countries with a depreciating currency. In the long run, the depreciation of the currency will usually more than eliminate the gains in local currency terms. So, whereas in 2007 both the Dow Jones and the S&P 500 exceeded their previous highs reached in 2000 in US Dollar terms, these indices failed to make new highs in Euro terms. In addition, whereas the US economy expanded in US Dollar terms between 2001 and 2007, in Euro terms it actually contracted!

Even with the S&P 500 having shot up since the beginning of the year by over 25%, it has merely kept pace with the price of Gold. And during the last 10 years, the S&P has lagged behind the official US inflation rate...while lagging VERY far behind both the Euro and gold. Since the end of 1999, the S&P 500 has delivered a total return after inflation of about minus 25%. 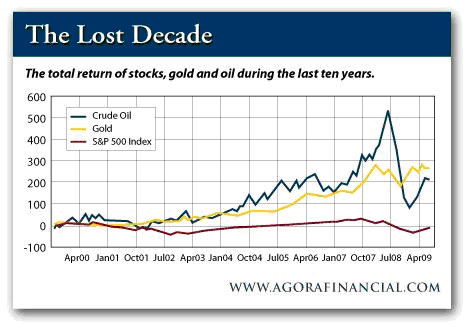 Unfortunately, the US is not the only country that is busily debasing its currency. "Everyone" is doing it. Because of the current collective debasement of all paper currencies by central bankers, I believe that precious metals and mining companies will maintain their purchasing power.

Also, I should add that precious metals could appreciate even if the US Dollar miraculously recovered strongly against foreign currencies for an extended period of time. Such Dollar strength would probably be a symptom of some horrible economic or political problems around the world, which could be friendly to precious metals.

Central bankers and pundits seem to believe that they have averted the second Great Depression, while ignoring the fact that more and more debt produces less and less GDP and fewer and fewer jobs.

For now, though, the low ten-year bond yield is the lifeline from which all support flows. Much of the investment universe holds together because money can still be had for cheap – not by the volition of a cooperative private sector, rather induced by a US government that simply distributes money for free. Such an ill-conceived idea could only have been born in the test tube of a central banker.

Private lenders comprehend the difficulty of making profits when being forced to lend for nothing, so the government increasingly finds itself to be the interest-free lender of last resort.

Ultimately, if central bankers continue this process for long enough, it is the Dollar, and any currency or economy still pegged to it, that could eventually crash. Therefore, we investors find ourselves in the precarious position of having to maintain sufficient liquidity, but not too much in case the real value of these liquid reserves is wiped out by politicians and central bankers gone mad.

Looking to Buy Gold today? Make it simple, secure and cost-effective...holding it safely offshore in Zurich, Switzerland...only at BullionVault