END_OF_DOCUMENT_TOKEN_TO_BE_REPLACED

US consumers are less confident than business. Gold has benefited...

A BATCH of mixed economic data was released this week and last, writes Frank Holmes at US Global Investors.

It underlines continued strength among US businesses and manufacturers. But consumer confidence still seems to be held back by the global slowdown, central bank policy concerns and other factors.

This suggests investors should remain cautious and might want to consider assets that have demonstrated an ability to preserve capital in times of uncertainty – gold and short-term municipal bonds among them.

For the third straight month, consumer confidence slipped on fears that the days of cheap gasoline might be coming to an end. The University of Michigan's Index of Consumer Sentiment fell to 90 in March, down from 91.7 in February. Although it's still above recession levels, the index has been trending down for the past 12 months. 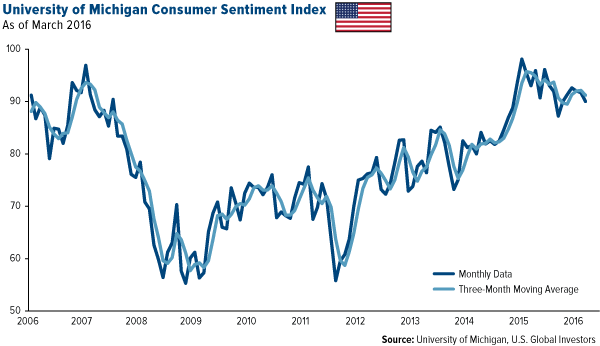 Conditions improved for manufacturers in New York State, according to the monthly Empire State Manufacturing Survey. Many investors pay attention to this metric as an indicator of industry health in the very influential New York region of the US The headline reading climbed 17 points to its first positive score since July of last year, with significant improvements in new orders and shipments. Manufacturers also said they were more optimistic about business conditions six months out. 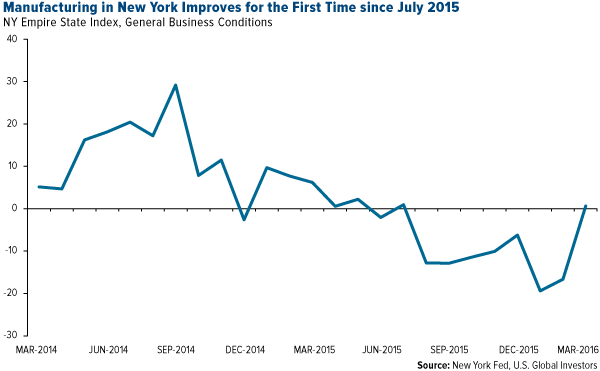 Housing data was also mixed. On the one hand, we saw a higher-than-expected rate of new housing starts in February. Single-family homes led the way, rising from 767,000 in January to 822,000, the highest print since the end of the recession. This helped push the total number of homes to 1.18 million, a 5.2% increase from January and an impressive 30.9% jump from the previous February.

At the same time, existing-home sales dropped a substantial 7.1% in February, according to the National Association of Realtors. Low supply levels and price growth were the leading culprits.

The most welcome news was that the core consumer price index (CPI) – which excludes food and energy – rose 2.3% year-over-year in February, representing the fourth straight month of inflation and the highest rate since October 2008. 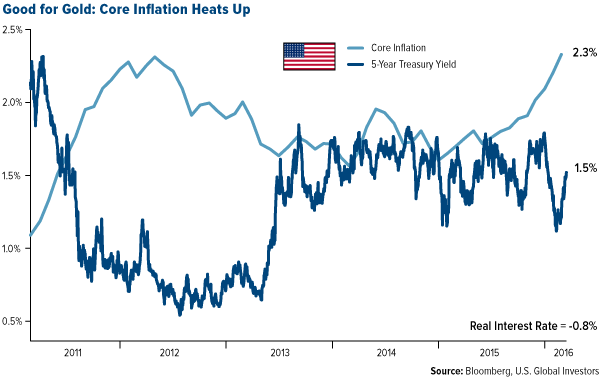 As I've pointed out many times before, gold has tended to respond well when inflationary pressure pushes real interest rates below zero.

To get the real rate, you subtract the headline CPI rate of annual consumer-price increases from the US Treasury yield. When it's negative, as it is now, gold becomes more attractive to investors seeking preservation of their capital.

The yellow metal has risen more than 17% so far this year, making it one of the best performers in 2016.