END_OF_DOCUMENT_TOKEN_TO_BE_REPLACED

Many are in denial about the end of Abundance...
THE FEDERAL RESERVE is probably not ready to take the aggressive plunge into Nominal GDP Targeting just yet, writes Gregor Macdonald, but it likely will at some point.
Such a policy, which received wider attention during Ben Bernanke's Congressional questioning last year and was also highlighted this year in a paper delivered at the Jackson Hole conference (Woodford, opens to PDF), has not caught any visible traction with Washington policy makers possibly because it's seen as either too radical, or simply too new.
However, after four years of broad reflationary policy (and another year to come) failing to meaningfully spur US employment growth, the Fed may be willing to try such measures by late next year, 2013.
Indeed, given the Fed's recent announcement of open-ended quantitative easing (QE), one can already anticipate the incremental move towards Nominal Gross Domestic Product (NGDP) Targeting, which has as its central belief that an aggressive and open-ended promise to pursue growth at the expense of inflation is the booster required to push a structurally broken economy back to normal trend. Moreover, in contrast to Bernanke's swift rejection last year of NGDP on a conceptual basis, Bernanke discussed the idea in friendlier terms during his post-Federal Open Market Committee (FOMC) news conference.
What's 'exciting' about the emergence of NGDP Targeting into mainstream economic thinking is that, once implemented, it will provide a real-world test of reflationary policy's final effort to combat the forces that have led to the end of strong, economic growth. The appearance of the Woodford paper further highlights the reality that endless amounts of cheap capital will be provided to restart economies, now that we are in energy transition, with the world having lost its cheap oil. The battle between credit and natural resources will be renewed.
What will be the effect on global natural resource extraction in an era of NGDP Targeting?
Simple. All of the remaining fossil-fuel BTUs will be extracted on an accelerated basis, and governments will race to provide the capital to do so.
It makes sense that just as the era of abundance is coming to an end – an era which dominated developed world economies over the past 250 years – an enthusiastic, vestigial embrace of Abundance would pour forth from culture. Books such as Abundance: The Future is Better Than You Think and also The Coming Prosperity have appeared in a flourish, all in the past year.
Is it not telling that this outpouring has occurred just as it has become crystal clear that prices of resources were not – even in the post-2008 era – returning to levels of the prior decade?
It is either lurid or tragic that assertions of abundance would flower after energy prices endured a price revolution, agriculture prices did the same, and purchasing power and incomes in the developed world entered decline. The repricing of the planet is a super-trend that has endured for more than 10 years now, and it has wreaked havoc on just about every asset class from stocks to housing. While observers currently cheer stabilization in such prices, it's worth noting that the S&P 500 first reached current levels more than 12 years ago. Therefore, each unit of the stock market buys less of everything. So much for abundance.
It is additionally rather galling to be harangued by Abundance Theorists at a time when OECD economies have essentially failed, both in their financial systems and their ability to produce jobs, and are instead now producers of poverty. As purchasing power declines in the West against energy and food, what can Abundance Theorists possibly be thinking? It is not as if the industrial revolution in the Non-OECD is producing higher quality lives either, as countries like China convert themselves into waste dumps of coal-fired and chemical pollution, and India sees pluralities of its population continue to go without electricity or a reliable water supply.
Abundance would mean that globally, energy is so plentiful that it would be too cheap to meter. On the contrary, global energy prices – and in particular, food prices (which are strongly linked to energy prices) – have completely broken out of long-term trend lines to the upside.
There is no better measure of the aggregate loss of purchasing power against resources than the advance that poverty has made in the past 10 years, especially in the United States. While it's true that various policy choices have exacerbated income inequality in the West for over thirty years, such explanations were more satisfying from 1975-2000, during a long period of efficiency gains in the economy. As it happens, the US Census Bureau has just released fresh data on US poverty, and while not a surprise, it does not make for pleasant reading. US poverty is at its highest levels since 1993, but the current level — 15% — is very near the highs of the last 40 years: 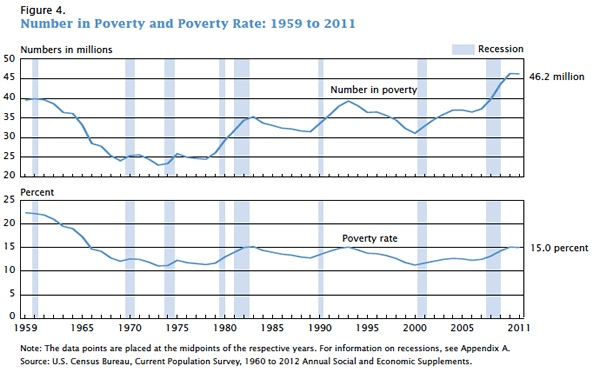