END_OF_DOCUMENT_TOKEN_TO_BE_REPLACED

THIS is getting monotonous, writes Bill Bonner in his Diary of a Rogue Economist.

Another day, another record high for the Dow...now above the 22,000-point mark for the first time in history.

And based on the CAPE ratio – a valuation measure that compares stock prices to the average of the past 10 years of inflation-adjusted earnings – the S&P 500 is more expensive than it was right before the 1929 crash.

No volatility. No worries. If there is a train wreck coming, investors think they are all on the bus.

"Yes, stock prices keep going up...here in France, too," said a wise man who came over for dinner last night.

"But I have a feeling it's the same situation. You have Trump. We have Macron. Everybody's looking for the situation to change. But it never does. Too many people like it the way it is.

"They're the ones who get something from it. But our governments are spending too much money. Eventually, they'll go broke and drag us down with them."

We can't improve on that assessment. But we can add to it.

Last week, the US Treasury Department released an estimate of its finances through the rest of the year. It showed that the feds would need to borrow more than $500 billion in the fourth quarter just to keep the bills paid.

This is more government borrowing in a shorter period of time than ever before – even during World War II.

This will mean two important things.

First, Congress will have to raise its $19.8 trillion debt limit.

Second, interest rates will go up.

For all its calm and nonchalance, it is hard to see the US stock market can crash through both of these barriers without triggering the airbags.

We have looked at how the stock market tends to move in "primary trends" that can last decades.

The trend begins with the mavericks, who leave the herd and set out in their own direction.

Then, when others see it paying off, they join in. Finally, the least-informed investors crowd in at the end – buying the Nifty Fifty in the 1960s...or FAANGs (Facebook, Apple, Amazon, Netflix, and Google) and ETFs today – expecting to enjoy the gains of the last 20 or 30 years.

But then...something goes wrong. A crisis develops. And the long swing downward begins. A bearish primary trend takes over a bullish one. 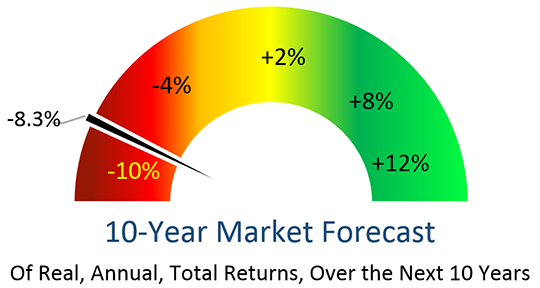 For illumination on the first crisis of this autumn, we turn to our friend David Stockman.

He was a member of Congress. Then he served in former President Reagan's cabinet as his budget advisor. Then he moved to Wall Street, where he was frequently "in the room" when the big deals went down.

David has been watching Washington and Wall Street for 47 years. And now, like our old friend Richard Russell, he has well-sharpened instincts:

We are literally just weeks from a thundering crisis over the debt ceiling and continuing resolutions for fiscal year 2018 that will hit the casino like a ton of bricks.

That's because it won't last for just a few days or even weeks. A bruising, contentious struggle to keep the lights on in the Washington Monument, in fact, is about to become virtually a permanent condition in the Imperial City.

It will be a "bloodbath," says David. The fiscal conservatives in Congress will demand tough concessions before raising the debt ceiling. This will lead Team Trump to turn to Democrats to get the votes they need.

But the Democrats, too, will want concessions...touching off a Stalingrad-type battle. Get-along, go-along Democrats and Republicans will come along together to try to exterminate holdout conservative hardliners.

So far, the only thing that gets bipartisan support is more spending for the military, as evidenced by a New York Times headline:

And when push comes to shove, Congress will get the job done on the budget ceiling, too; politicians know their real job: to enable the Deep State.

But when you suddenly add half a trillion Dollars of government IOUs, you're asking for trouble.

Specifically, adding demand for credit should have the opposite effect of the Fed's recent quantitative easing (QE) programs, which added to the supply of it. Instead of going down, interest rates should go up.

By any measure, real long-term interest rates are much too low and therefore unsustainable. When they move higher they are likely to move reasonably fast. We are experiencing a bubble, not in stock prices but in bond prices. This is not discounted in the marketplace.

Will this be the beginning of the end...the end of the beginning...or just more of the middle, with stocks continuing to trudge drearily higher?