END_OF_DOCUMENT_TOKEN_TO_BE_REPLACED

A very dispiriting history...
SHORTLY before President Trump was diagnosed with coronavirus, two Boeing E-6B Mercury planes took off from each of the US coasts, writes Tim Price on his blog ThePriceOfEverything.
The planes in question can be used to send ballistic missile commands and form part of the US defence system. The history of US nuclear defence, however, is not exactly flawless.
On 24 January 1961, for example, a United States B-52 Stratofortress carrying two nuclear bombs lost altitude over Goldsboro, in rural North Carolina. The plane had sustained a fuel leak in its right wing, so the crew were advised to maintain a holding pattern along the coast to conserve fuel
But the leak soon worsened, and the plane was running out of fuel. The crew were advised to return immediately to Seymour Johnson Air Force Base.
They never made it. They lost control of the plane at 10,000 feet as they began their descent.
Five of the crew ejected and landed safely. One crew member ejected but was killed on landing. Two crew members died in the crash.
As the aircraft spun out of control, it parted company with its two 4-Megaton nuclear bombs.
Five out of six arming mechanisms triggered on one of the bombs: only a low-technology voltage switch prevented a 4-Megaton bomb with 250 times the destructive power of the Hiroshima bomb accidentally detonating on US soil.
Lt. Jack Revelle, the bomb disposal expert sent in to disarm the bomb, commented in 2011, "As far as I'm concerned we came damn close to having a Bay of North Carolina. The nuclear explosion would have completely changed the Eastern seaboard if it had gone off."
The bomb would have destroyed everything within a 17-mile radius. A declassified document written by Parker F. Jones of Sandia National Laboratories somewhat understatedly concluded that "The MK 39 Mod 2 bomb did not possess adequate safety for the airborne alert role in the B-52."
Analyst Christopher Cole points out:

"It is not inconceivable to imagine that, at the height of the cold war, a weapon of that magnitude exploding randomly on the eastern seaboard would have triggered immediate accidental retaliation against the Soviets, resulting in the end of humankind as we know it."

This is just one of many nuclear accidents during the cold war. Peace has a dark side.
How we interpret the Goldsboro near-tragedy depends on what we think about government in the first place.
The author Michael Lewis, referring to the Goldsboro incident in his 2018 book The Fifth Risk, is glass half full about the role played by Big Government:

"The reason it's worth thinking about this is the reason that bomb didn't go off was because of all the safety devices on the bombs, designed by what is now [the Department of Energy]."

Put aside the fact that Big Government built the bomb and commissioned the plane in the first place; we are still left with the uncomfortable fact that five of its six arming mechanisms failed.
If Goldsboro counts as a Big Government 'success' story, it is a very narrow one.
Fortunately, the failures of Big Government tend to be mostly limited to the economic realm. Over on this side of the pond, both main parties have, over the last four decades, demonstrated meaningful levels of gross economic incompetence.
In 1976, for example, James Callaghan's Labour government was forced to go cap-in-hand to the International Monetary Fund for a $3.9 billion loan – at the time the largest loan ever to have been requested from the IMF. At his speech to the Labour conference in Blackpool in 1976, Callaghan was obliged to make the following statement:

"We used to think that you could spend your way out of a recession, and increase employment by cutting taxes and boosting Government spending. I tell you in all candour that that option no longer exists, and that in so far as it ever did exist, it only worked on each occasion since the war by injecting a bigger dose of inflation into the economy, followed by a higher level of unemployment as the next step. Higher inflation followed by higher unemployment. We have just escaped from the highest rate of inflation this country has known; we have not yet escaped from the consequences: high unemployment."

The economic chaos and union strife of the 'Winter of Discontent' would usher in the Thatcherite reforms of the 1980s. Having finally dispensed with the services of Prime Minister Thatcher, the Conservative Party then blundered into the ERM crisis of 1992, in which the EU's nascent currency union began to fragment, and during which Sterling was ethnically cleansed from it.
In a desperate attempt to keep the Pound hitched to an unsustainable exchange rate against the Deutschmark, the British Chancellor, Norman Lamont, in conjunction with the Bank of England, managed to burn through something like £3 billion – which was a lot of money at the time. It was, commented the magazine Central Banker, as if "the Chancellor had spent that afternoon casually lobbing schools and hospitals into the North Sea."
Having, quite incredibly, ceded a reputation for economic competence to Labour, the Conservatives could then only watch from the sidelines between 1999 and 2002 as Labour's then Chancellor, Gordon Brown, sold half of the country's gold reserves (some 415 tonnes, or 56%) at the lowest prices in history, dubbed 'Brown's Bottom' – having helpfully announced his intentions to the market beforehand.
Then, of course, we all got to enjoy the Global Financial Crisis of 2007. We would argue that it has yet to be successfully resolved. One can, of course, make a legitimate argument that the GFC was first and foremost a product of the banking sector rather than of Big Government directly – though the subsequent constant monetary interventionism by central banks has hardly contributed to financial stability, unless you find stability in negative interest rates and an unsustainable bubble in speculative financial assets.
But nothing that the long-suffering British economy has endured since the 1970s can surely compare with the spectacular government response this year to coronavirus. Christopher Snowdon of the Institute for Economic Affairs:

"When future historians look back on 21st-century mortality statistics, they will struggle to find anything out of the ordinary in Britain in 2020. When they look at the economic data they could be forgiven for thinking we were hit by an asteroid."
"The Office for Budget Responsibility predicts a fall in GDP of around 12 per cent in 2020, the equivalent of having the 2008-09 recession twice in one year. The second quarter saw GDP fall by 20.4 per cent, breaking the record set during the Great Frost of 1709.. The full impact on unemployment won't be known before the furlough scheme ends, but the OBR expects it to treble to over four million, the highest number since the 1930s.
"The furlough scheme cost £35 billion and is one of many reasons why the public finances are in such a wretched state. In July, total government debt passed the £2 trillion mark for the first time. The national debt has doubled since 'austerity' began in 2010 and now amounts to 104 per cent of GDP, a level not seen since the immediate aftermath of the second world war.
"At the start of the year, the OBR expected public-sector net borrowing to be £55 billion. It is now forecast to be £322 billion. Public spending is predicted to rise by £182 billion while tax receipts fall by £130 billion. Nearly every form of tax is bringing in smaller revenues. It is no surprise that fuel, alcohol and air passenger duties have dwindled, but the government is also expected to get £21 billion less in corporation tax than originally forecast; £23 billion less in income tax; £7 billion less in stamp duty; and £11 billion less in business rates. These are
only forecasts, but it's worth noting that each of the OBR's four predictions since March has been more pessimistic than the last.
"All the while, the money-printer will be whirring. According to The Economist, the central banks of Britain, the Eurozone, Japan and the USA have 'created' (ie, printed) $3.7 trillion this year. If this does not lead to inflation, the economics textbooks will need rewriting. Higher inflation means higher interest rates and suddenly the cheap money being borrowed won't be so cheap.
"Future generations will be bewildered that a prosperous country threw its economy off a cliff in a failed attempt to suppress a disease that kills less than 1 per cent of those infected, most of them in their eighties and nineties.
"The scale of the disaster is so numbing that even the prospect of a no-deal Brexit barely registers as a problem any more. Unless the government develops a backbone, the 2020s will make the 'lost decade' of the 2010s look like a golden age."

Some of the damage to the nation's finances can be glimpsed in the chart below. 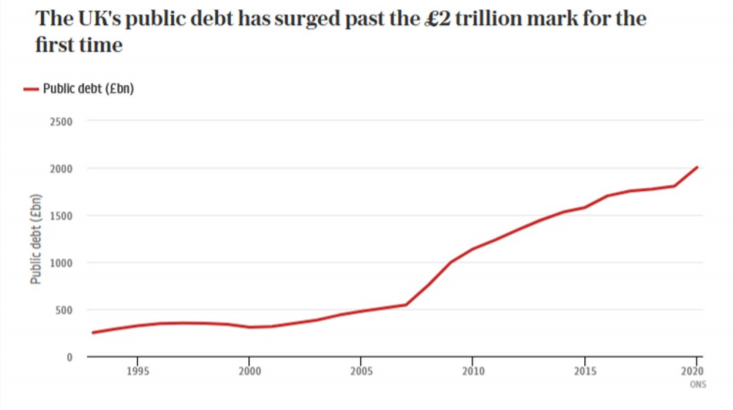 Prime Minister Alexander Boris de Pfeffel Johnson has evidently styled himself, in part, on his wartime hero, Sir Winston Churchill. We can now, at least, say that never in the field of human conflict was so much owed by so many, due to so few.
Far from being the economic solution, Big Government is the anti-Midas; everything it ends up touching turns to ash. If our politicians end up learning anything from this debacle, which is admittedly doubtful, it should be that the primary role of the government within the economy is simply to get out of the f**king way.