END_OF_DOCUMENT_TOKEN_TO_BE_REPLACED

ARE YOU sitting down for this? asks Frank Holmes at US Global Investors.

According to a recent survey, one in five American adults have nothing saved for retirement or emergencies.

A further 20% have squirreled away only 5% or less of their annual income to meet certain financial goals. Less than a third of all Americans have saved at least 11% or more. 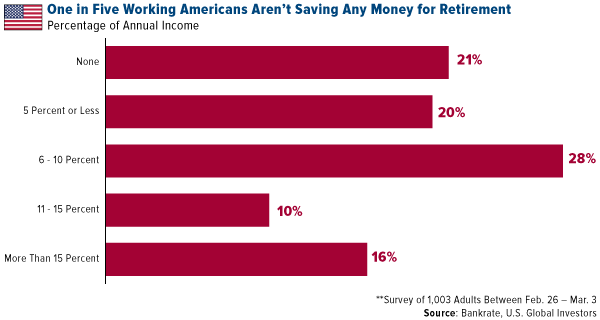 The survey, conducted by Bankrate in late February and early March, is just the latest indication that the US faces a major retirement crisis.

Every day, some 10,000 baby boomers turn 65, and they're reaching retirement in worse financial shape than the previous generation for the first time since Harry Truman was president, according to a report by the Wall Street Journal.

The survey also raises the question of why some working-age adults haven't been able to take full advantage of a booming US economy and historic bull market to build wealth. Unemployment is near a 50-year low, and wage gains were at their highest level in a decade last month.

According to Bankrate, the number one reason (40%) why Americans aren't saving is that they have too many other expenses. Sixteen% said they "haven't gotten around to it," while the same percentage blamed the low quality of their job.

Indeed, not every employer provides access to a retirement plan such as a 401(k). A recent study by the National Institute on Retirement Security (NIRS) found that a little over half of working American adults have access to an employer-sponsored 401(k)-type plan. Only 40% actually participate.

As such, the median retirement account balance among all working-age Americans is – again, are you sitting down? – $0.00. That's the median balance, remember, so half of all Americans have more than that. The other half, meanwhile, have even less than $0.00 to their name.

That brings me to my next point. Interestingly, only 13% of those surveyed by Bankrate cited debt as the reason why they're not saving as much as they should. I say "interesting" because total US consumer debt, including revolving and non-revolving debt, now stands at more than $4 trillion, the most ever. 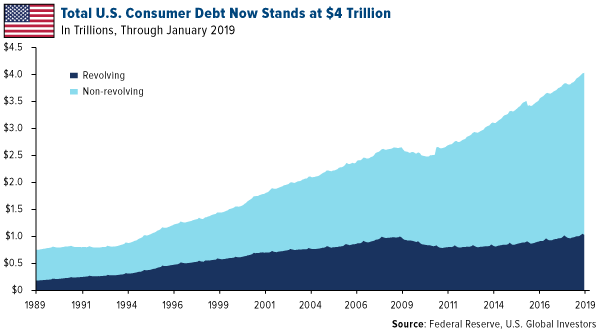 Debt affects us all, but it can seriously hinder workers' ability to retire on time. The more you're on the hook to pay lenders, the less you have to pay yourself.

Revolving debt, such as credit card debt, is now valued at more than $1 trillion, which exceeds the all-time high right before the financial crisis. And according to the Federal Reserve Bank of New York, people age 60 and older owe about a third of this total.

Non-revolving debt – auto loans, student loans, mortgages – is even worse. Student loan debt alone stands at an astronomical $1.5 trillion. It doesn't help that, since the 1980s, the cost of college tuition has increased almost eight times faster than wages.

But if you think this burden belongs only to young people, you're sorely mistaken. As many as 2.8 million Americans over the age of 60 are saddled with student debt, according to CNBC. Those over 50 owed more than $260 billion last year, up dramatically from $46 billion in 2006.

All combined, it's little wonder that a significant number of Americans feel some anxiety when it comes to their financial stability and retirement preparedness, despite a strong US economy. A CFP Board survey conducted on Election Day 2018 found that less than a quarter of voting-age Americans were "completely confident" about their ability to navigate through economic ups and downs. Even less, 22%, felt the same about their ability to retire on time. 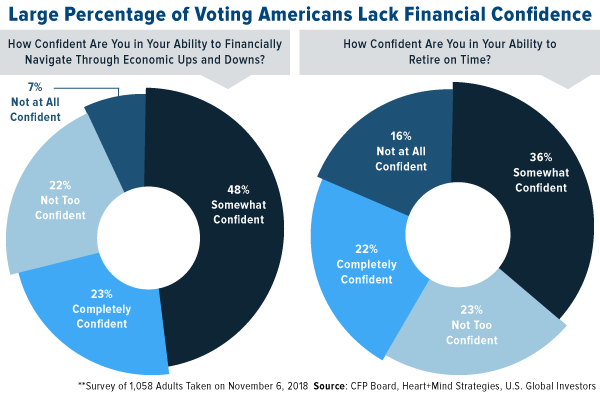 So what's the solution?

I've heard from a number of people over the age of 50 who say they worry they haven't adequately prepared for retirement, and yet are at a loss as to where to start. They want to build wealth fast but might have second thoughts about investing in the market.

I want to reassure those people that they need not put a significant amount in the market all at once, which for most people is impractical and risky. The truth is that they have options. One of the best, I think, is Dollar cost averaging, which allows investors to fund their financial goals affordably.

In short, Dollar cost averaging is an investing technique that lets investors add to an initial investment incrementally over time, usually once a month. That way, investors don't break the bank, and as an added bonus, they don't need to worry about market timing.

It's a technique that has worked well for investors in the past. Take a look at the chart below. It shows a hypothetical initial investment of $1000 in an S&P 500 Index in March 2009. Ten years later, after regular monthly contributions of only $100, the value of that initial investment grew at an annualized 12.96% to more than $26,385. 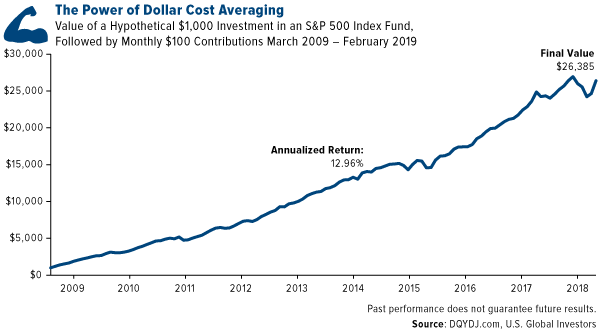 This is just an illustration. The past 10 years have been an exceptionally profitable time to invest, and there's no guarantee that the good times will last.

Sound enticing? With Dollar cost averaging, such as Global Investors' ABC Investment Plan, some of the worry is eliminated from your retirement preparations or other financial goals.