END_OF_DOCUMENT_TOKEN_TO_BE_REPLACED

And the staying power of 'conspiracy' stories online says the bear isn't done...

In AUGUST of 2005 I wrote an article entitled Waiting for Godot, writes Gary Tanashian in his Notes from the Rabbit Hole.

It seems silly now but the mood of the time was one of frustration for many gold bugs as the S&P 500 was on a robo grind upward and gold was seemingly going nowhere.

The theme of the article was to have patience, gold was just fine. Of course, that period was in the midst of a more traditional inflation, when gold and commodities out performed stocks.

So any measure of patience then was a tiny thing compared to what is needed today.

The bear market in which gold resides today is a complex thing, with global inflation and deflation interacting and producing among other things, a Goldilocks environment in the US and rock solid confidence in the Bernanke and later Yellen Feds. Greenspan was continually derided as he allowed a dangerous commercialcredit bubble to expand right along with stock prices and the economy.

Today it is government credit that is expanding out of bounds. Maybe the fact that government can expand credit (debt) at will plays into the reasons that this thing is more intense and long-lived than the commercial credit bubble. After all, as lax as the situation got under Greenspan, market forces eventually bubbled up to the surface and knocked the thing down. So far in the current situation, nothing has even hinted at dissuading the still-expanding bubble. From Floatingpath... 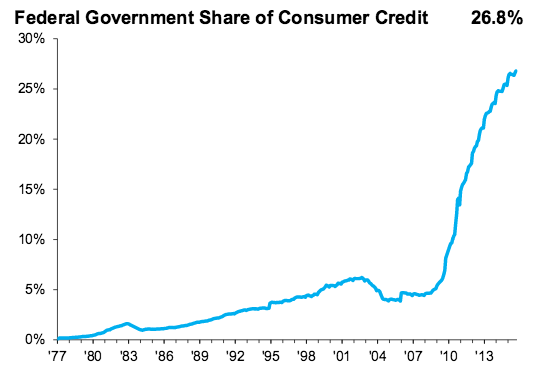 Moving on to gold, I hope the monthly chart below puts the patience needed then and the patience needed today in perspective. 2005 was a simple flat consolidation immediately prior to the next big leg up in a massive bull market. As my above-linked article implied, people just needed reasonable levels of patience and perspective (P&P) and all would be fine. Today gold is in the 5th year of a bear market and people need exponential levels of P&P to see it through. 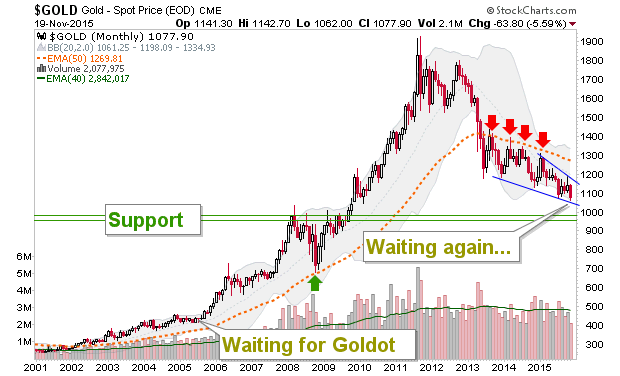 Unfortunately, the worse the bear market has become, the more defiant those with interests in exposing the mechanics of the bear market (a veritable cottage industry) have become. Every bounce (as seems possible now) is seen and hailed as the next big opportunity to vanquish evil.

Gold is manipulated. So what? It is also in the grips of a bear market.

Further, the bear market has long been indicated to have a very valid target below 1000 (960 is the number we have had open for years). That is the support shelf formed by the great financial disturbance in 2008-2009. And if a more innocent Gary who wrote the 2005 article above was talking about bullish stock market frustrations then the current situation makes that look like child's play as well.

In short, we are on a cyclical sentiment reset that has lined up every last dogmatic gold bug and designated him for extermination. Based on a recent interaction I had with the gold "community", in which NFTRH.com was bombed with traffic rushing in not to read anything that I have to say, but to read a piece on Commitment of Traders' manipulation forwarded to me by Ted Butler, I had to conclude that the bear was not dead yet.

There is still too much power left in the message of how poor virtuous gold is held at bay by evil money changers. I want to make clear that it is not Ted Butler or his work that I am criticizing. It is another element that turns this work into something that any sound investor should just be calmly biding or even ignoring until the time is right. Instead, too many people defend gold and fight the good fight, hearts in hand, at the behest of 'right vs. wrong' ideology.

It's a hunk of metal, people.

Manipulation or not, the bear is going to die one day on its own. From a gentleman who is a fairly new subscriber to NFTRH, reprinted with permission:

"Please may I ask if you would be able to write a short piece describing how you retain your composure and patience to wait for the next big gold macro trend.

"As background I am one of the many who has been persuaded too soon by the gold bug false prophets to invest in gold and silver.

"Equally, I am continually impressed by your stock chart sets ups for potential short term trading opportunities, although I recognise in myself I would be dreadful at executing them. Thus as you can imagine, my current investment position combines accumulating cash and patience. However, as the weeks tick by waiting for the next big gold move, the tension is becoming increasingly unbearable."

I'll respond paragraph by paragraph, 1-4. This subscriber's email reflects a theme I have had hit my inbox all too often and it bums me out and needs to be talked about.

I have been doing it (trying to maintain patience) for so long now that it is just second nature. There is a whole world of markets out there to be managed. I was later in 'calling' a bear market in gold than cycles analysts who may have seen it coming in advance, but we did safely catch on in 2012 when certain parameters for gold, silver and the miners were violated soon after the introduction of QE 3. Since then it has been relatively easy to call it a bear market until proven otherwise (by technicals and macro fundamentals) and tune out the cheer leading.

This is why I am writing this article. It is upsetting to get mail from people who were influenced into something that has caused them emotional and/or financial pain. I wrote this thing in 2011 to try to make the point that what I was calling the Euro Crisis inspired "Knee Jerk" into gold was likely to end badly for those who emotionally momo'd the market(see 'To the Newly Minted Goldbugs'). Little did I know what the extent would be back then.

Well, my chart setups have been pretty good on balance. Some very good, some clunkers. But trading this market has not been easy for me. Despite getting many stock charts and index charts right through the volatility, my own trading has not been as good (I'd call it spotty). That is because I am a faulty human without the psychological profile needed for watching the market every minute and ruthlessly executing trades.

So I, like many others, await the day when trends emerge from this choppy thing we have had going for the last year. I want quality of life, not a casino mentality.

This last paragraph says it all. There is life outside of gold. But it is presented by some people as something greater than it is. This heavy, shiny, pretty rock will save us from entities hell bent on destroying our quality of life! They are evil and manipulative and if we just hang in there, we will win in the end. Good will prevail. Hallelujah!

I don't want to sound at all like I am poking fun at people's impulse to do the right thing, live a respectable life and have some form of monetary honesty. But people pitching tired old lines this many years into a bear market have not yet been debunked, despite having exposed themselves as being agenda-driven years ago. Some were the heroes of the last cycle and are still at it on this cycle.

I cannot shake the image of the generals (gathered in their masses) in the rear while the troops fight on.

It's pop guns against Howitzers. That is by conspiracy theorists' own work uncovering powerful, corrupt and manipulative interests. You either own gold for the long-term and be quiet about it, or you keep it out of your life until you, not the ideological barkers, say the time is right.