END_OF_DOCUMENT_TOKEN_TO_BE_REPLACED

IS DEMAND GROWTH responsible for the recent surge in commodities? Or is it just a plain old inflationary increase in global money supply? asks Dan Denning in his Daily Reckoning Australia.

Right now, all roads lead to China, which is why it's fitting that Australia's Prime Minister Julia Gillard is there at the moment. Maybe she can advise the Chinese on whether Australia's Foreign Investment Review Board will knock back Barrick Gold's C$7.3 billion bid for the Perth-based Zambian copper play Equinox. Barrick's recent bid trumps the offer made by Chinese-backed metals trader Minmetals Resources.

You can see why a metals trader would chase a large copper play. But why would a gold company want to become a copper company too? Not being familiar with Barrick's balance sheet, we don't know if the growth in the asset column (at this price) will lower Barrick's return on equity.

You may have already heard of Grantham. He's the Chief Investment Strategist at GMO Partners. He's also a bit of a contrarian, and ruffled a few Aussie feathers last year when he said the local housing market was a "time bomb" and predicted the failure of at least one major bank.

Grantham doesn't have a black box. But he does view markets as essentially mean reverting. Things can't stay overvalued or undervalued forever. He views Aussie house prices as overvalued. But in his April letter, he surprised a lot of people by concluding that commodity prices will go higher.

Grantham writes that, "Accelerated demand from developing countries, especially China, has caused an unprecedented shift in the price structure of resources." You can read the whole letter here.

Grantham is basically saying that "This time it's different with commodities". Why? He's claiming that the growth of the developing world is eclipsing the world's ability to provide the raw materials of civilization at ever cheaper prices. It's no small claim. It reverses about two hundred years of history, as you can see from the chart below.

STUFF: Getting cheaper for 200 years and counting 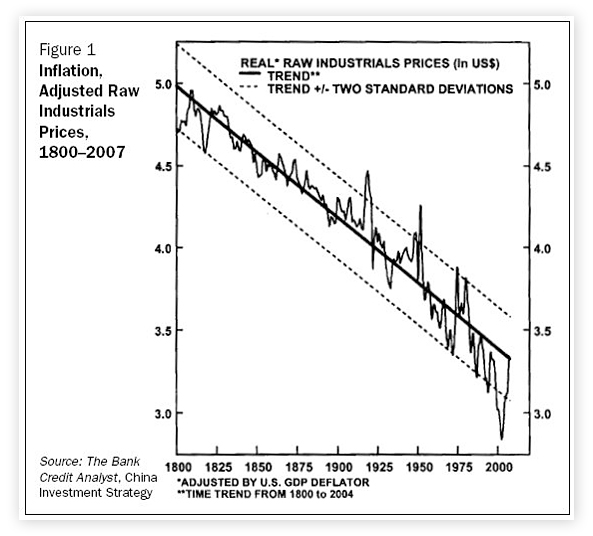 The chart above shows that the primary trend in commodity prices is down and has been for the last 200 years. Anyone who is arguing for a long-term bull market in resource prices has to contradict this chart. And the chart makes sense once you look at the grand sweep of economic history.

As more areas of the world are open to exploration (North America and Australia and New Zealand in the 19th century) commodity producers found more of what they were looking for. There were more places than ever to look for copper, oil, iron ore and places amenable to growing wheat, rice, and corn. What's more, improvements in technology made resource extraction cheaper and more efficient.

So why is 200 years of proven pricing history in the commodities markets now changing? Grantham says population growth and GDP growth in the developed world is what is "different" this time. He writes that:

The primary cause of this change [toward structurally higher commodity prices] is not just the accelerated size and growth of China, but also its astonishingly high percentage of capital spending, which is over 50% of GDP, a level never before reached by any economy in history, and by a wide margin

I believe that we are in the midst of one of the giant inflection points in economic history. This is likely the beginning of the end for the heroic growth spurt in population and wealth caused by what I think of as the Hydrocarbon Revolution rather than the Industrial Revolution. The unprecedented broad price rise would seem to confirm this.

This means you can put Grantham squarely in the "demand growth" camp for explaining rising commodity prices. It is a bit odd that Grantham is citing China's massive, commodity-intensive fixed-asset investment as a source of commodity demand, without connecting China's investment binge to its huge accumulation of US Dollars (the whole relationship itself being the major product of the credit bubble).

In other words, he doesn't trace China's commodity demand back to its original source: global credit growth.

But if Grantham is right, then buying scarce resources (especially world-class proven reserves and resources) is the correct investment strategy for a historical tipping point.

If you're conducting a thought experiment, you might also conclude that after a big global financial crisis AND a sovereign debt crisis, the world economy has kept on keeping on. It's survived the worst that anyone can throw at it. And as the developing nations continue to surpass the growth in the developed world (deindustrializing Welfare States) you get a formula for commodity demand exceeding supply. It's also a relief to believe that the worst is behind us, even if it's just a feeling.

But we wonder if the structural shift in commodity prices also has anything to do with money supply growth. The US Federal Reserve has tripled its holdings of public and private debt since the quantitative easing programs began. It's taken $2 trillion in brand new Dollars to make that happen. Do you think that – coupled with stimulus in China and Europe – could have anything to do with soaring commodity prices?

But you could also be watching a version of Gresham's Law playing out, where investors began to hoard commodity-related investments and sell everything else. Gresham's Law is roughly that bad money tends to drive out good money for economic transactions. People hold on to what's valuable (gold) and spend what loses value (paper money). How does that apply to today?

For the last 30 years, the great credit bubble has resulted in massive asset inflation; stocks, bonds, commodities, real estate, art, pinball machines, and baseball cards. Portfolios the world over have been loaded up with debt-backed securities or companies whose growth depends on the growth in credit; and that is being generous with the "asset" designation.

Now portfolio managers are eager to unload the debt and own real stuff. Or at least stop accumulating the bad stuff...

Looking to Buy Gold? Get access to live markets 24 hours a day with the World No.1 BullionVault...