END_OF_DOCUMENT_TOKEN_TO_BE_REPLACED

Which would you miss more: PC games and investment banks, or petrol to fuel your car and keep you warm...?

A major commodities blowout is in the cards, according to the consensus. The most widely quoted reason is a US recession that will sympathetically pop the commodity bubble.

It seems to me that these views are intertwined with a changed perception of how the economy works. A new paradigm if you will.

People used to pay homage to the notion of a business cycle, a somewhat predictable and even stately progression of economic growth leading to excess, followed by a corrective recession. After which the cycle would begin anew.

In today's bold new world, however, most investment observers overlay onto the business cycle a shifting series of rapidly rising – and falling – sector-focused bubbles.

Because of their noticeable size and influence, it seems to me that the bubbles can mask the underlying business cycle to some extent. Case in point; we all easily recall the Dot.Com bubble but have a harder time recalling what the prevailing economic times were in the late 1990s.

And what happened after the DotCom Bubble burst? Why, the housing bubble of course!

Such bubbles have always occurred. But they appeared only periodically, every generation or so. Prior to the Dot.Com bubble that heralded in this new era, economic activity was more broadly distributed. When times were good, those sectors that normally benefited all benefited in something of a range.

Today, however, while most remain somewhat range bound, a single sector appears, Godzilla-like, to cast a shadow over the broader financial landscape. It is that sector that then receives the lion's share of the focus and the investment flows, quickly becoming a self-fulfilling prophecy.

Of late it has been the turn of commodities, even Gold, to stalk the land. And, if you believe the pundits, it is time for this monster to be brought low. If not by Mr Market alone, then with the help of the regulators with all their many WMDs (Weapons of Market Disruption).

Before commenting on whether or not I believe they may succeed, a brief observation on the origin of this new bubble era.

In my view, it is largely due to the massive amount of money in various forms sloshing around the globe, most of which emanates from the Quicky Print Fiat Money Machines which have been reliably chugging away at central banks around the globe for several decades now.

One of the primary outcomes of this odd chapter in monetary history is that the notion of the value of money has been pretty much thrown out of the window...though not one person in a thousand understands that the game has changed.

For example, the Chinese are correct in thinking their reserves include 1.4 trillion foreign currency units, but that fact is increasingly disconnected from any reliable measure of future value.

Underscoring the point, 1 trillion US Dollar units set aside five years ago are today, adjusted for inflation, worth just $620 billion. But who can say what those 1 trillion units will be worth five years hence?

While it would require far more electro-ink than time allows for today, it is my contention that the utility of the fiat monetary system is beginning to fade. After all, at its core, the acceptance of unbacked money is an act of faith.

And people are losing faith in the fiat currency units they are being asked to accept in exchange for their many labors, or in return for their tangible assets – and what is more tangible than commodities?

Back to the Bubble

So, are commodities merely the latest bubble, a bubble now resting up against a pin? Or is something else going on?

In my view, the explanation hinges on the difference between, say, a Dot.Com fantasy company run by a couple of twenty-somethings and, say, oil...the stuff you use to get to work in the morning...or to ensure the icicles stay on the outside of your windows in winter.

As much as you might enjoy the games offered up by your favorite software group, when push comes to shove, you could probably manage without.

To a lesser or greater degree, the same acid test can be applied to the value-add of Bear Stearns and the other financial stocks versus, say, the iron that supports your local highway bridges. Or the copper that is so important to all manner of electronics.

Or even houses and condos bought on speculation by people who couldn't afford them versus the nickel needed to create the stainless steel that is everywhere.

It is my simple contention that while selected commodities can and will get ahead of themselves (and probably already have)...the underpinning reality for their higher prices has far more to do with the value of the currency units they are priced in than with some broader investment fad.

To this date, I can count on one hand the number of friends of mine outside of the business circles I run with who have made any investments in commodities. Add into the equation the clear supply and demand challenges for many of the core commodities and the bubble doesn't seem quite so bubbly.

Here's a picture of commodities against both the US Dollar and the other major world currencies. 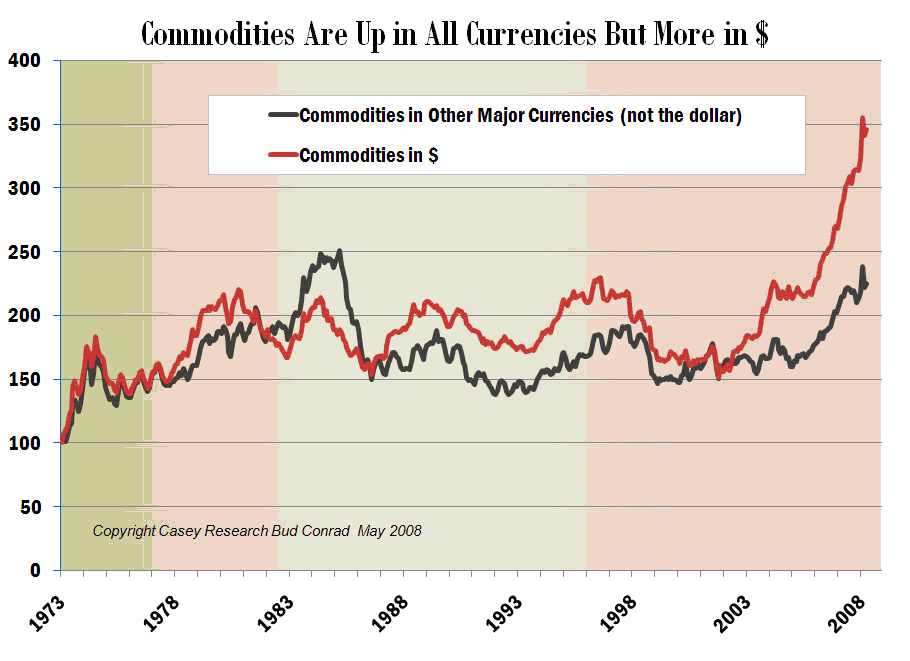 Well, while useful in certain industrial applications, Gold as a commodity has a unique utility – it is considered as tangible money the world over. It is portable, easily divisible, durable and unquestionably accepted around the world.

In an environment of a global crisis in confidence in fiat money, Gold will provide a critical function that will only grow in importance in the months and years just ahead.

In short, the occasional corrections aside, this show is far from over.

How do you protect your assets in times of economic decline? Which investments provide safety when blue-chip stocks, government bonds and mutual funds do not? You'll find specific answers and actionable advice in our new free report, The Recession Tool Kit – 9 Winning Strategies to Profit from Crisis.

Including a nest egg for rainy days and how to buy it...plus lucrative, low-risk investments that every prudent investor should have...you don't want to miss this special report. Get your Recession Tool Kit free from Casey Research here today.