END_OF_DOCUMENT_TOKEN_TO_BE_REPLACED

Time now to switch from stocks...?

NEAR the beginning of the year, Goldman Sachs analyst Jeffrey Currie made the case that the macro backdrop right now favored commodities in 2018, writes Frank Holmes at US Global Investors.

With inflation pushing prices up and world economies borrowing record amounts of capital, it was the best time "in decades" he said for investors to have exposure to base metals, energy and other materials.

Currie's forecast has been mostly accurate so far. Except for a rocky June, commodities have been one of the best performing asset classes in the first half of the year.

From January to the end of May, the group, as measured by the Bloomberg Commodities Index, rallied close to 3% – 170 basis points ahead of the S&P 500 Index. Advances were largely driven by crude oil, which currently seeks to close above $80 a barrel for the first time since November 2014. 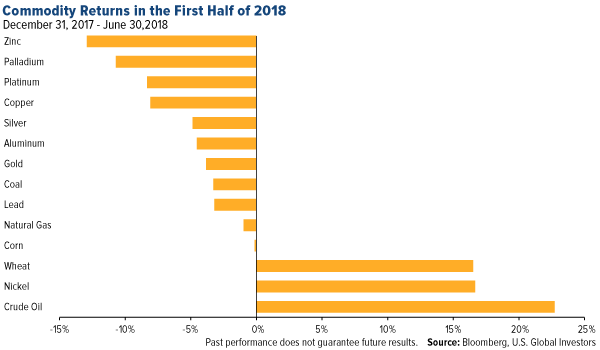 There are a number of factors supporting oil right now, not least of which is President Donald Trump's decision to withdraw the US from the Iran nuclear deal.

The move has the potential to significantly curb exports out of the Middle Eastern country, responsible for about 4% of the world's supply. Markets were further disrupted two weeks ago when the US government warned importers to stop buying Iranian oil or face sanctions.

In addition, supply is being squeezed by worsening economic conditions in Venezuela, which sits atop the world's largest known oilfield, and conflict in Libya, home to Africa's largest oil reserves. On Wednesday of last week, though, Libya indicated it would resume exports from its eastern ports, which sent Brent crude down more than 2%.

Many investors might be inclined to believe the oil rally is over, but I think we could continue to see movement to the upside on further supply restrictions and rising demand. In its June Statistical Review of World Energy, British oil and gas giant BP reports that consumption grew for the eighth straight year in 2017, climbing to 98.2 million barrels per day (bpd) for the first time ever.

We would need to see growth of only 2% by the end of this year for demand to reach and surpass 100 million bpd – a phenomenally large sum.

This could be achieved if Chinese demand growth remains as robust as it's been for the past decade. Consumption stood at 12.8 million bpd in 2017, a new record for the country. This figure is up 64% from only 7.8 million bpd in 2007.

Although China is now the world's number one auto market in terms of sheer size, vehicle and vehicle finance penetration are still relatively low compared to the US, Japan, Germany and other major economies. There were about 115 vehicles per 1,000 people in 2015, according to J.D.Power, compared to the US with 800 vehicles per 1,000 people. That means there's plenty of upside potential for energy as more Chinese households are able to afford automobiles.

Speaking of autos, the excitement over electric vehicles (EVs) is helping to drive up the cost of nickel, vital in the production of lithium-ion batteries. In the first six months of the year, the price of nickel rose close to 17%, to $14,823 per metric ton. As impressive as that is, it's still three and a half times below its all-time high of $54,050, set in May 2007.

As I said earlier, commodities had a rough June, falling some 3.64% as trade tensions between the US and China escalated. This was the group's biggest monthly slump in nearly two years, led by copper and soybeans. 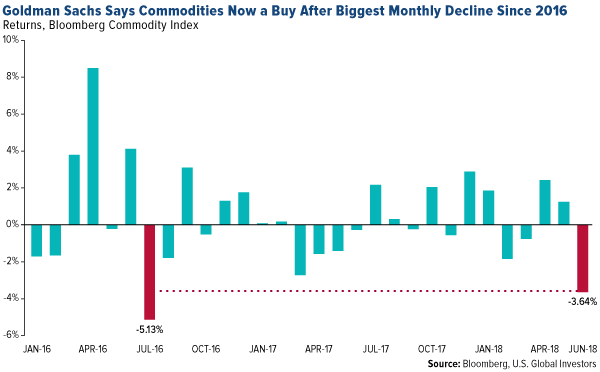 Goldman analysts say this has created a well-timed buying opportunity, as the selloff was overdone. According to the bank, the US-China trade war impact on commodities "will be very small, with the exception of soybeans where complete rerouting of supplies is not possible."

Goldman now forecasts a 10% return on commodities over the next 12 months as the US Dollar corrects and trade fears subside.

If you recall, I made a similar bullish call on commodities back in April after showing that, relative to equities, commodities are as cheap now as they've possibly ever been. They're even cheaper than they were in 2000, before the start of the last commodities super cycle.

Had you invested in a fund tracking a commodities index in 2000, you would have seen your money grow at a compound annual growth rate (CAGR) of around 10% for the next 10 years, according to Bloomberg data. 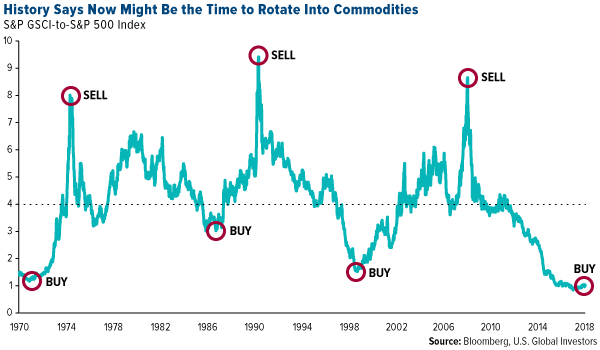 Among the most attractive opportunities I see is copper, which rose to an 11-month high of $3.29 per pound in early June before sinking 15%.

Like nickel, copper has benefited from the forecast that EV adoption will accelerate. According to Bloomberg New Energy Finance, EV sales are expected to grow from a record 1.1 million units worldwide in 2017, to 11 million in 2025, then to 30 million in 2030.

This is good news for copper. As I've pointed out before, EVs require three to four times as much copper as traditional gas-powered vehicles.

"You're going to need a telescope to see copper prices in 2021," Robert Friedland, billionaire founder and executive chairman of Ivanhoe Mines, told us back in January when he visited our office.

Robert's comment might be hyperbolic, but the thing to keep in mind is that demand for the red metal is about to turn red hot.