END_OF_DOCUMENT_TOKEN_TO_BE_REPLACED

THE MONETARY authorities at the People's Bank of China (PBoC) are well aware of the "Dollar trap", says Mike Hewitt at Dollar Daze.

China's huge foreign exchange reserves at US$2.65 trillion are the largest in the world. At least one-third of that is denominated in US Treasury Securities as shown in the graph below.

If the PBC decided to rapidly unwind its US Dollar position it would result in a "mass depreciation" reminiscent to that experienced by the Banque de France in the 1930s when it held half of the world's foreign exchange reserves. 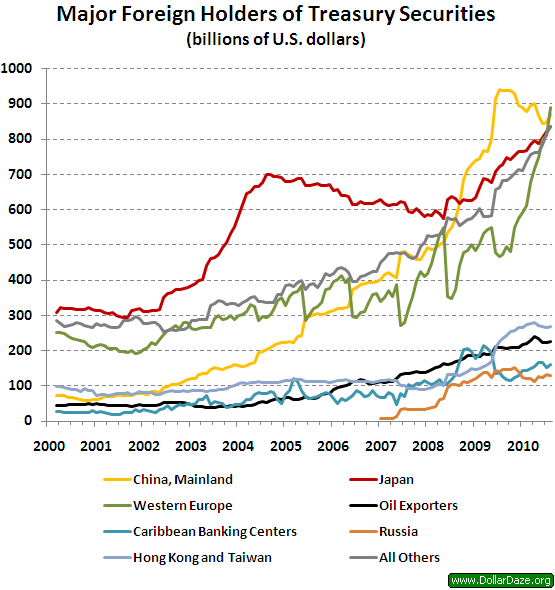 Chinese officials have made a series of tentative steps towards diversifying out of the US Dollar. They have:

Foreign exchange reserves were initially proposed as a means to address the perception that the quantity of gold was insufficient for supporting global trade.

The US Dollar is thus the preferred currency of the world for both historical and practical reasons. It was the last currency to remain on the Gold Standard and, through the specter of the Bretton Woods Agreements of 1944, the majority of international transactions remain US Dollar denominated.

Since the mid-1970s, the United States has exported its Dollars for goods and incurred a negative balance of payments year after year for nearly four decades. Under the classical Gold Coin Standard (pre-1914), a negative trade balance would have depleted domestic gold holdings. As a result of domestic gold becoming more scarce, its value increases, resulting in lower prices.

Through this process, the citizens of the United States would have found it agreeable to increase the amount of exported goods in exchange for gold due to its increased purchasing power. However, because the Dollar is a fiat currency, made legal tender by government decree, the US Federal reserve is simply able to print more currency and the imbalances are allowed to continue.

Every economic boom born from an expanding money supply proceeds this way until an inevitable collapse of confidence occurs and the public rushes for value.

Foreign exchange reserves, often promoted as a stabilizing factor, are in actuality, a destabilizing force. A large accumulation of any fiat currency becomes a burden to the holder as it cannot be quickly unwound without driving the value of the currency down and precipitating the loss of capital that the holder is trying to avoid.

To accumulate a large foreign exchange requires a persistent surplus of goods being exported to the country issuing the reserve currency. This results in a lower standard of living for the citizens of the country producing the goods for export, as they do not enjoy the fruits of their labor. This would not necessarily be such a problem if the money received for these goods represented real wealth which could be used to purchase different goods at a later date. However, in today's world of fiat currencies, where paper money can be printed without limit, the analysis of trade becomes a bit more convoluted.

Otherwise, they will be left holding on to worthless, colored pieces of paper.

Buying Gold for your own, personal reserves today? Make it simple, secure and cost-efficient by using BullionVault...