END_OF_DOCUMENT_TOKEN_TO_BE_REPLACED

Half of China's population is now urbanized. The cost of urbanization for the rest...?

HOW MUCH credit is China willing to create to fund the next phase of urbanization/social engineering? asks Dan Denning in his Daily Reckoning Australia.

Or, if you prefer a more down-to-earth version of the question, is China capable of engineering a second boom for mining stocks BHP and Rio Tinto

Maybe the iron ore companies know something about the 3rd Plenum of the 18th National Congress of the Communist Party of China that we don't. That session is scheduled to begin in October of this year. But with China's growth export growth model breaking down (partly) under the pressure of cheaper Japanese exports, the leadership group in China is talking about its October plan now. And it's talking about urbanization.

The talks are muddled. In fact, a bit of an internal dispute seems to have become public in the last 10 days. Reuters reported on a $6.5 trillion urbanization plan earlier in the week, saying it had it a snag with Premier Li Keqiang. Specifically, the unconfirmed reports were that that the ambitious plan from that National Development and Reform Commission (NDRC) to boost economic growth with more urbanisation spending was knocked back by Li. Why?

Well, last time China tried this, it spent about $1 trillion and got a house price bubble, huge local government debts that are expensive to refinance, and a giant misallocation of capital that made its financial system more fragile. Li doesn't want to make the same mistake, only with more money and on a larger scale. And China needs other economic reforms as much as it needs another housing boom.

But there are some interesting details to the story. China's official urbanisation rate is 53%. That means there are about 700 million Chinese people now living in cities. But the real rate is around 35%, since many of those counted as urban dwellers are really migrating factory workers that have no legal status as city dwellers.

This is not an enviable position for the central planners to be in. At the local level, you'd be all for more expansion of debt and more spending. But China's new leadership is already nervous about that growth model. They have the same dilemma as the Europeans, the Japanese, and the Americans. Kick the can down the road or deal with the pain of adjustment now.

The NDRC took the unusual step of saying that its urbanisation plans have not been knocked back by the State Council (Li) because it hasn't even submitted them yet. That's plausible. But it's also possible that there is internal division about whether China should take the path of least resistance and pump more money into housing and urbanisation, or take the more complicated path of more reform.

In an interesting historical footnote, it was Third Plenum of the 11th National Congress in 1978 where China launched its new era. Deng Xiaoping is reported to have said that, 'Engels never flew on an aeroplane; Stalin never wore Dacron.' That was an oblique way of justifying reform by pointing out that communist/socialist ideology is useless as a theory if it creates poverty in reality.

We'll come back to that in a moment. But speaking of reality, is the real world giving us any indication of what China will do this year? Check out this chart, showing China's Jiangxi Copper and the spot copper price since the middle of 2009. They track nearly perfectly.

But what does the chart tell you? 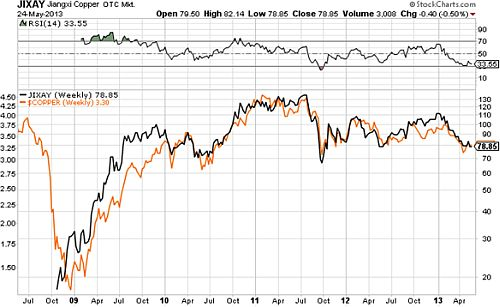 Well, it tells you that both copper and Jiangxi are trading a bit above their lows for the last three years. The Relative Strength Index (RSI) of 33 is close to over-sold territory. All of which would explain why our colleague here at The Daily Reckoning Alex Cowie has been poking around the copper stocks this week.

Is copper anticipating a big China stimulus? Copper might rally even if China does nothing. Alex sent a report about a landslide at Rio Tinto's Bingham Canyon copper mine in the US state of Utah. Over 150 million tonnes of rock and dirt slid into the bottom of the mine. It could prompt the largest insurance claim in the history of mining. But in terms of copper supply, it could remove 1.3% of global copper supply. That's how much the mine accounted for last year.

The copper story is admittedly complicated right now. Both Alex and fellow Reckoner Greg Canavan have written before about the use of copper as collateral for financing in China's shadow banking system. It is hard to judge how much copper demand is driven by construction and how much by inventory accumulation for financing reasons. Alex has gone back to basics by looking at the cash on the balance sheet.

In the meantime, China is struggling with the fundamental failure of central planning, both in theory and in practice. Over 36 million Chinese died of starvation between 1958 and 1962. The famine was a result of Mao Zedong's top-down crackpot moves to increase grain and steel production.

In an article from the Wall Street Journal earlier this week, Yang Jisheng recalls travelling home as an 18-year old student to find his father starving to death in the country. Last year Yang released his book Tombstone: The Great Chinese Famine, 1958-1962. Officially, the famine is obliquely referred to as "three years of natural disaster."

But the disaster was entirely man-made. It was built on the idea that a few people at the top of a hierarchical centralized system could allocate resources and make planning decisions for millions. That's what Austrian economist Freiderich Hayek called the 'fatal conceit' of socialism, namely that one person can ever have enough knowledge to allocate labor, capital, and resources better than the free market.

In the free market, individuals make their own decisions based on their own knowledge of their own circumstances and their own desires. These decisions help create prices, where producers meet consumers based on preferences. All of it is voluntary, non-coercive, and less wasteful of human talent and natural resources. It is sound both in theory and in 300 years of practice.

It's no accident that Hayek's great work, The Road to Serfdom, was translated into Chinese in 1962. It was only made available to the leadership and only as a way of studying the critique of socialism, not, presumably, as a means of promoting liberty and prosperity. But was it also published as an indirect warning to Chinese leaders about making another catastrophic mistake like the starvation of 36 million people?