END_OF_DOCUMENT_TOKEN_TO_BE_REPLACED

China's stimulus program is easing off. For now...

GOLD's correction so far has been pretty tame, writes Greg Canavan in The Daily Reckoning Australia.

After peaking around US$1380 just after the Brexit panic, the subsequent falls have been measured. As I've written before, a drop down to $1300 would be entirely normal.

In fact, gold could fall below $1300 and it wouldn't concern me too much. As you can see in the weekly chart below, gold has had a strong run since the start of the year; it now needs to correct and consolidate before making another move higher. 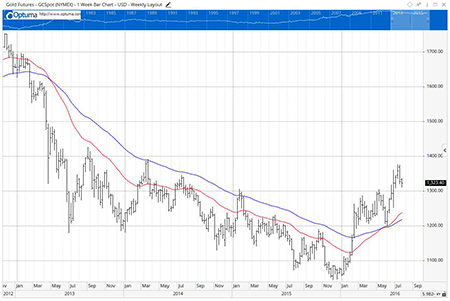 I don't know when the next move higher will start, but I do know that now is the time to build a position if you haven't done so already.

US Dollar strength caused weakness in commodities and stocks today. But the US Dollar index has been strong for a while. After bottoming in early May at around 92 points, the index has rallied over 5%.

A major side effect of this US Dollar strength is strength in the Chinese Yuan. That's because China loosely pegs its currency to the US Dollar. But China doesn't want a strong currency. It's trying to squeeze growth out of its debt-addled economy any way it can – and a strong currency doesn't help.

Which is why the Chinese government continues to weaken the Yuan against the US Dollar, as the chart below shows: 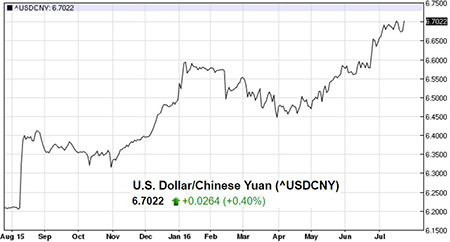 Here's the interesting thing, though. To the left of the chart you can see the sharp devaluation that spooked global markets in August last year. Since then, the Yuan has continued to weaken, but markets haven't batted an eyelid.

What's the big deal behind a weaker Yuan?

Maybe there isn't one. But during last year's panic, much of the concern centred on the large amount of US Dollar-denominated debt held by many Chinese companies. As the Yuan weakened, therefore, debt repayment costs increased.

Maybe some debt restructuring has occurred over the last year. Or maybe the recent stimulus-led growth spike has simply papered over the cracks that are in China's financial system.

If that is the case, we'll find out how big the cracks are soon enough. A report in Bloomberg, quoting Michelle Lam from Lombard Street Research, highlights that the government's attempt to blast the economy with liquidity is not translating into broader money growth:

'"The divergence between narrow and broad money growth just highlights how difficult it has become for Beijing to generate growth by throwing money at firms that are unwilling to invest. Stimulus has boosted growth but has few second-round effects, and money is just not being passed around."'

In other words, when the stimulus efforts wear off, growth will begin to falter again.

Rowan Callick, China correspondent for The Australian, seems to have picked up on this theme with a series of bearish articles on China lately. In today's effort, he quotes a couple of Chinese economists who aren't too upbeat on China's steel industry. This has major implications for iron ore prices.

They say China drove up steel production by six times from 2000 to 2015, to 804 million tonnes, almost half global output.

"The scale of that expansion is unprecedented in the history of industrialisation in Europe, North America and East Asia," Liu Haimin and Song Ligang go on, writing in the latest annual China Update, published this week by the Australian National University.

This is a point I've made before, but it's worth repeating, given China's latest stimulus efforts have given markets a false sense of security about the health of China's economy.

That is, Australia was a prime beneficiary of China's historic steel expansion. And while the iron ore majors will continue to feed China's steel mills, they will do so at much lower levels of profitability once this stimulus starts to fade.

When will that be?

I'll keep my eye on certain stocks for clues. Stock prices discount the future, so that's where you should look. Rio Tinto (ASX:RIO) and Fortescue Metals (ASX:FMG) are the obvious choices. They'll tell you what's coming.

Economic management in China over the past few years has been very predictable. That is, the government provides stimulus, then pulls back on the intervention to see how the economy performs naturally.

Soon enough, the economy weakens. When the growth slows to a level that the government deems unacceptable to employment or financial stability risks, it puts its foot back on the accelerator.

Based on this timetable, China looks to be in the 'foot off the accelerator and see how things go' phase. This is the riskiest phase for investors, precisely because the perception of risk is at its lowest.

But in a financially repressed and centrally planned economy, perception is deception.