END_OF_DOCUMENT_TOKEN_TO_BE_REPLACED

The CHINESE railway system has changed dramatically since I last visited the Asian nation, writes Frank Holmes on his blog at US Global Investors.

I can remember taking the high-speed train from Shanghai to Beijing during a visit in 2011; at the time it was a fresh, dedicated line covering 819 miles in a little less than five hours.

In December of last year I wrote about China's announcement for a proposed $230 billion high-speed rail system linking Beijing to Moscow. Its estimated distance was 4,350 miles and it would replace the Trans-Siberian Railway, cutting down travel time dramatically.

So how is this sector of the market holding up?

China continues to be a compelling, long-term growth opportunity and the government is focused on strengthening its economy. Fixed-asset investment (FAI) is considered a key driver of economic growth. According to UBS' 2016 China Rail Outlook report, things look encouraging.

UBS has a positive outlook on rail FAI in China next year. The group forecasts that FAI could reach RMB 840 billion, citing its relevance to China's 13th Five-Year Plan.

2016 marks the beginning of the first year of the 13th Five-Year Plan (FYP), which goes through 2020, and is particularly significant when it comes to spending on urban rail transit and public-private partnerships, according to UBS. Urban rail transit is forecasted at an average annual investment of RMB 701 billion from 2016 through 2020.

The group expects the Chinese government to announce a higher FAI target for the 13th FYP, although it will likely be a conservative projection. As you can see in the chart below, FAI has historically risen above the estimated numbers, causing the need for upward revisions. Even then, actual FAI comes in higher still. 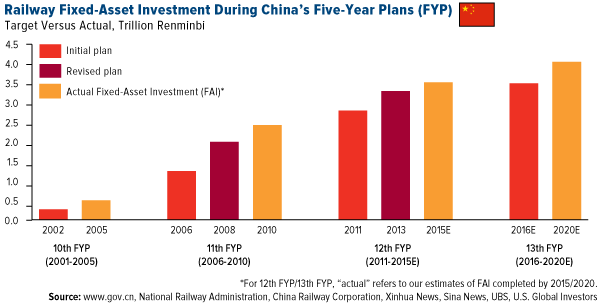 Total railroad operating length in China is expected to reach 118,000 kilometers, over 73,000 miles, by the end of this year according to UBS' 2015 Outlook. Of those, the group believes high-speed rail passenger-dedicated lines could surpass 20,000 kilometers (12,427 miles).

While UBS makes a strong case that domestic rail investment is poised to accelerate over the next five years, when it comes to overseas order growth, Xi Jinping's "One Belt, One Road" economic project is another important driver.

The One Belt, One Road strategy is one of the most monumental initiatives among China's various infrastructure prograMs.As I wrote earlier this year, it harkens back to the famed Silk Road and is intended to open up new trade routes to Southeast Asia, the Middle East and Eastern Europe.

It's important to note that this project also promotes Chinese rail expertise to the broader Asian, European and even American markets. Leading railroad infrastructure and equipment makers in China should continue to benefit from the initiative.