END_OF_DOCUMENT_TOKEN_TO_BE_REPLACED

China has not learned lessons from Western mistakes...

WHEN YOU get too much credit growth, you usually get goods and services inflation as a result, writes Greg Canavan for the Daily Reckoning Australia.

That's especially the case in developing economies that don't have sophisticated financial markets to soak up all the credit growth and translate it into 'beneficial' asset price inflation.

The Financial Times reports that the Peoples Bank of China governor Zhou Xiaochuan says China must be on 'high alert' against inflation. The comment comes after China's inflation rate jumped to a 10-month high of 3.2% last week. Speaking at the central banks news conference yesterday, Zhou said:

'In the past some of us thought it was no big deal if inflationwas a little bit high, growth will be a little faster and then we can control inflation afterwards. But international experience and our own experience here show that this thinking might not be correct. It requires careful attention to maintain low inflation.'

Herein lies China's problem. Controlling inflation at the tail end of a historic credit boom is no easy feat. If you don't move to tighten, the boom becomes crazier. If you tighten too much you burst the bubble and then have a destabilising asset price deflation on your hands.

The FT article goes on to state:

'Mr Zhou's comments put China at the opposite end of the policy spectrum from the US and Europe, where central banks have kept monetary conditions extremely loose in order to rev up sluggish growth.

'The split with other central banks is not an ideological rift so much as an acknowledgment of China's very different economic reality, where even a moderate policy loosening last year led to a sharp rise in credit issuance, a pick-up in growth and, lately, the threat of inflation.'

We would argue that China is simply a little further back down the road than the US and Europe. The West has travelled this path before with their own credit booms. And in their failure to recognize the losses brought about by the bust and write off of bad debts, these economies are still struggling in a very low growth, almost recessionary environment.

They're no longer concerned about inflation. But it's something China still has to deal with. This is probably why governor Zhou will stay in the job beyond the mandatory retirement age of 65. He's been around a while and the Communist Party probably doesn't want a new governor tinkering with things at such a delicate juncture.

We've been bearish on China for a while and have called this recovery a sham. But at this early stage of the 'recovery' we thought China's economy would be exhibiting more strength than it currently is. That's especially considering the resurgence in credit growth over the past few months (although February's figures were the weakest since November last year).

But the economic recovery has been a narrow one, enjoyed mostly in the 'fixed asset investment' sector - namely property. The chart below shows that property investment is again running back above a 20% growth rate, while the growth rate of manufacturing investment has declined. 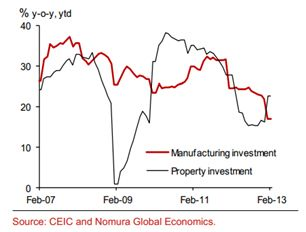 This is not the growth China's leaders want. But it's about the only growth they're getting, because they don't have the will to make the necessary changes to curb it. There's too many connected people making too much money from the boom. Everyone is 'getting rich' (everyone who matters, anyway) and when that happens, it's very difficult to take away the punchbowl.

2013 is looking increasingly like the year that China will make the tough transition to a lower, more sustainable growth rate. This is a good thing from a longer term perspective. But it will be VERY destabilising in the short term.

So we watch, and wait.