END_OF_DOCUMENT_TOKEN_TO_BE_REPLACED

Watching China's GDP data, you'll see that one man's investor is another's middle-aged housekeeping auntie...
The MOST IMPORTANT person buying gold in China today? asks Adrian Ash at BullionVault.
Bloomberg would have you think it's a middle-aged "auntie". And they might just be right.

"Yang Cuiyan, a 41-year-old housekeeper from Anhui province, is one reason China is poised to topple India as the world's top consumer of gold," says the newswire, "even as investors desert the metal."

Yes, of course the sub-editors got to this article. Yes, we should never take such "slice-of-life" reporting as anything serious.
But that distinction, between the middle-aged Chinese "auntie" (as women of Yang's age are apparently known) and the "investor" smacks loudly of a West-centric view.
Clearly, she's dumb to buy gold jewelry in the hope of retaining her savings when investors here in the West are "deserting" the metal. Nevermind that Yang, and the army of Chinese aunties, is an investor herself. Nevermind that, buying only an ounce each (as she has), that army of 120 million Chinese women in their 40s today (the prime age for China's stereotypical "goldbug" according to brokerage Nomura, although it says he's male and buys at his bank) would outweigh the gold sales from Western ETF contracts in 2013 five times over.
And nevermind that the world's still-fastest growing major economy is now the world's No.1 private gold buyer too, finally overtaking India in 2013. 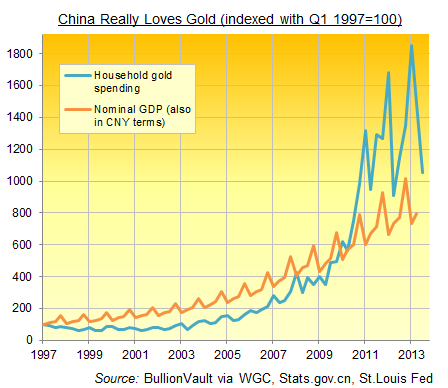 Of course, that army of aunties doesn't have the cash to buy 1 ounce of gold each at will. Nor will they all choose to buy gold, let alone all at once. But nor are those women alone in buying gold in greater quantities, and at greater values, as prices fell for Chinese and Western households alike this year. Unlike here in the West, precious metals are not a minority sport in China today. And as Marcus Grubb at market-development organization the World Gold Council notes in a recent interview, the 2013 slowdown in China's economic growth has NOT seen a slowdown in China's gold demand.
It's been a while since we looked at China's gold demand in depth, or the share of China's household savings going to gold. But as our chart above shows, there was indeed something of a 2012 gold panic in China. It has only grown greater this year, pulling the gross spend on jewelry, coins, investment bars and gold trinkets still higher.
You don't need to misread the available, well-established and rigorous data to reach a startling conclusion. Based on the World Gold Council's numbers, produced by the GFMS consultancy (now part of Thomson Reuters), private consumer spending on gold, in Yuan terms, has risen up to 18 times over in the last decade. Crunching the numbers today, we reckon 0.8% of China's entire GDP was spent by private households on physical gold in the first quarter – which includes the peak seasonal demand of lunar New Year – of both 2012 and 2013.
Whether for jewelry, bars or coin, it's very hard – and very old-skool colonial – to deny the investment motive in that world-beating demand today. But one man's investor is another's housekeeping auntie. Making it all the easier to dismiss her impact, within the hardest-saving and fastest-growing big economy, on the world's flow of physical gold.