END_OF_DOCUMENT_TOKEN_TO_BE_REPLACED

Not the People's Bank. The people themselves...
MUCH WAILING and gnashing of teeth yet again about China's central-bank gold reserves, writes Adrian Ash at BullionVault.
You might recall such chatter from episodes like "Why is China buying gold?" in early 2009...
...or "China Buys Gold!" from March 2010...
...or "China Buys Gold, Gold Price Sinks" from mid-2015.
Here in New Year 2023, the People's Bank now says it bought a little over 60 tonnes for its gold reserves in November and December. And while many pundits guess (yet again!) that Beijing is under-reporting its holdings, that still took Beijing's official gold holdings – the 6th largest national hoard after the USA, Germany, Italy, France  and Russia – to more than 2,000 tonnes by New Year's Eve.
Chinese households, however, are (yet again!) far heavier gold buyers, acquiring over 2,000 tonnes of gold in the form of jewellery, coins and small bars in just the last two-and-a-half years on China Gold Association figures, and buying almost 5 times as much over the last decade as the People's Bank now says it holds in total.
Accounting for 1 in every 5 ounces of gold sold to end-users worldwide over the last decade, the gold added to China's household stockpile since 2013 equates to 0.33% of the country's GDP in Dollar terms, a huge figure compared to the 0.06% spent on gold by US or UK consumers and more than twice the 0.16% of annual economic output spent on gold by consumers in Germany, now the Western world's keenest gold buyers. 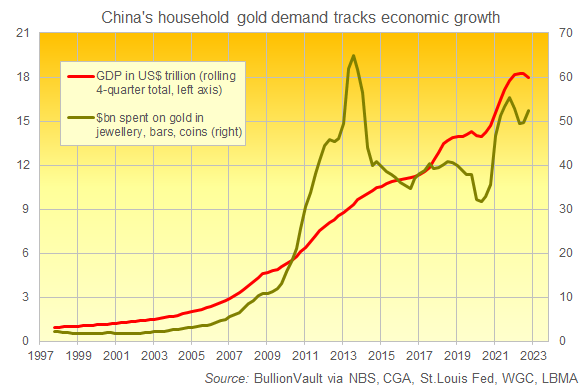 The two don't track exactly as you can see, and China's private household demand plainly got ahead of itself from 2010 to 2013, when the Communist Party's exhortations to buy gold (as a way, no doubt, of spreading the nation's exposure to the central bank's huge Dollar reserves) led to something of a panic into bullion followed by the steepest global gold-price crash in 3 decades, spurring fresh record-heavy consumer buying.
Over the following few years, the inevitable retreat in China's then-glutted household demand left the global gold price slipping lower near $1000 per ounce at end-2015, because Western investment managers continued to sell without the market finding such eager buyers on the other side of the world.
Longer term however, and more relevant to 2023, China's household spending on gold continues trending higher to map underlying growth in the world's second largest economy. Indeed, China over-took India as the world's No.1 private gold consumer a decade ago, and just as India's gold demand peaks with the festival of Diwali, China's gold buying repeatedly jumps during the Lunar New Year holidays, when families give as well as invest in gold alongside sharing cash gifts.
The first wave of the Covid pandemic broke that pattern in 2020, and gold demand for the New Year of the Rabbit, starting this Sunday, could be capped as mass infection follows the Communist Party finally abandoning its zero-Covid policy. But while consumer demand doesn't typically drive gold prices higher short term, re-opening plus China's deep cultural appetite for physical gold could provide solid support if not a tailwind for gold in 2023.
Hang on though – didn't China just report weak GDP growth?
Yes, the official data agency on Tuesday put economic growth for 2022 at 3% in Chinese Yuan terms, the weakest since 1976 if you ignore Covid's first-wave slowdown to 2.2% in 2020.
Indeed, last year saw a couple of calendar quarters where the world's 2nd largest economy shrank on a year-over-year Dollar basis. But gold spending by Chinese households rose at the end of 2022 according to Thursday's data from the China Gold Association, and as a proportion of GDP it grew above 0.36%, the strongest quarter since New Year 2021's big rebound and, before that, the jump of New Year 2017 (both hit just above 0.42%).
So the fact that weaker GDP might have worked against decent household gold demand makes the strength of that demand only more notable. Moreover, any analysis of China's US Dollar-equivalent GDP data for 2022 has to note both the strength of the Dollar (jumping to 2-decade highs on the currency market) and of course Beijing's ill-judged 'Zero Covid' lockdowns, shutting factories and shutting people in their homes every time someone coughed in the neighboring apartment block.
China's lockdowns are now finally abandoned, spurring some heroic forecasts for GDP to surge ahead in 2023. But longer term, it's important to note that the massive 0.33% of GDP spent on gold by Chinese consumers over the last decade has come despite Chinese households taking only a fraction of GDP as income compared to most of the rest of the world.
In the West, says China expert Michael Pettis, professor of finance at Peking University's Guanghua School of Management and a senior fellow at the Carnegie Endowment, household income "typically represents 70-80% of GDP...In China, however, households retain a much smaller share, roughly 55% of GDP."
What's more – and thanks to weak social security safety nets for retirement and health – China's households then save a huge proportion of that lower share of national income, a massive 23% of GDP in fact on 2018 data, some 15 percentage points higher than the global average according to separate analysis from the International Monetary Fund.
Beijing knows these huge savings from a small pot spell trouble, both for GDP growth and for social stability if the household share of GDP doesn't improve. Fixing the distribution won't be easy, says Pettis, but in the near term, any progress is sure to outweigh the dulling effect on GDP of China's ageing and now falling population.
As China re-opens, in short, the country's huge appetite for bullion looks very likely to provide a floor should the current surge in global prices retreat. So too could the broader return of household gold demand worldwide. 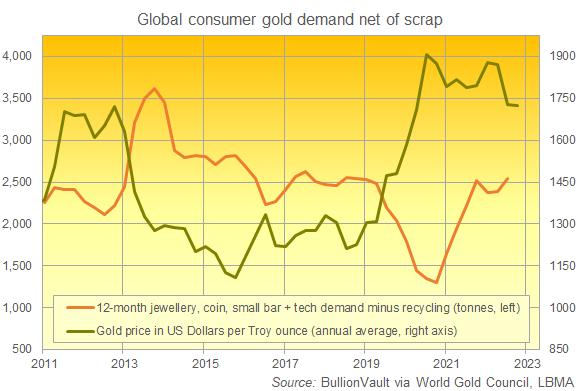 As you can see, the best available gold demand data – gathered, analysed and compiled by specialists Metals Focus for the mining industry's World Gold Council (and due to include Q4 2022 very shortly) – show that net of recycling flows (aka 'scrap'), total consumer demand worldwide last year recovered its pre-Covid levels.
In 2022, however, the underlying price of gold was as much as $500 per ounce higher in US Dollar terms, and very much higher in terms of the rest of the world's currencies.
Is all this certain to put a floor under gold prices this year? Can it sustain the New Year surge above $1900 and €1770 and back to UK Pound record gold highs near £1580...?
Not for sure and most certainly no, respectively. But on balance, gold has come into 2023 with global household demand already back to pre-Covid levels at prices very much higher, while Chinese consumers – finally released from lockdown both economically and socially – show no sign of snapping the long-term link between their spending on gold and the country's GDP growth.