END_OF_DOCUMENT_TOKEN_TO_BE_REPLACED

IN CASE you haven't already noticed, inflation has been steadily creeping up since July, writes Frank Holmes at US Global Investors.

In February, the most recent month of available data, consumer prices advanced at their fastest pace in five years, hitting 2.7% year-over-year. March data won't be released until this week, but I expect prices to proceed on this upward trend, buttressed by rising mortgages and costs associated with health care and energy.

One of the consequences of strong inflation is that real rates – what you get when you subtract the current consumer price index (CPI) from the nominal rate – have turned negative. And when this happens, gold has typically been a beneficiary. This is the Fear Trade in action.

Take a look below. Gold shares an inverse relationship with the real 10-year Treasury yield, which is influenced by consumer prices. When inflation is soft and the yield goes up, gold contracts. But when inflation is strong, as it is now, it can push the Treasury yield into subzero territory, prompting many investors to move into other so-called safe haven assets, including gold. 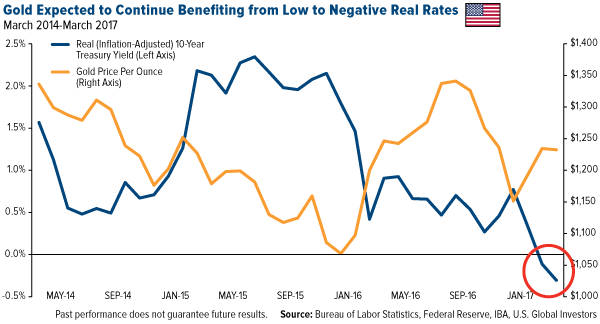 Again, I expect consumer prices to continue rising, especially if President Donald Trump gets his way regarding immigration and trade. Slowing the stream of cheap labor from Mexico and other Latin American countries, coupled with raising new tariffs at the border, should have the effect of making consumer goods and services more expensive.

Although it might sting your pocketbook, faster inflation could be constructive for gold investors. In its weekly precious metals report, London-based consultancy firm Metals Focus emphasized the importance of negative real rates to the price of gold, writing that "real and even nominal rates across several other key currencies, including the Euro, should also remain negative for some time."

The European Central Bank's deposit rate currently stands at negative 0.4%, not including inflation, and Sweden's Riksbank, the world's oldest central bank, will continue its negative interest rate policy as it awaits stronger economic growth. Meanwhile, the Bank of Japan left its short-term interest rate unchanged at negative 0.1% at its meeting last month.

This is all beneficial for gold. Discouraged by the idea of negative rates eating into their wealth, many savers might be compelled to invest in gold, which enjoys a reputation as an excellent store of capital.

Based on the near-term outlook for real rates, as well as uncertainty over Brexit, rising populism in Europe and Trump's trade and foreign policies, Metals Focus analysts see gold testing $1475 an ounce this year. If so, that would put the yellow metal at a four-year high.

As it is, since 2010, global central banks have been net buyers of gold as they move to diversify their reserves away from the US Dollar. Although 2016 purchases fell about 35% compared to 2015, they still remained high on a historical basis, thanks mostly to China and Russia.

These purchases are likely to continue this year, according to Metals Focus, though at a slower rate as many banks get closer to meeting their target reserves amount. 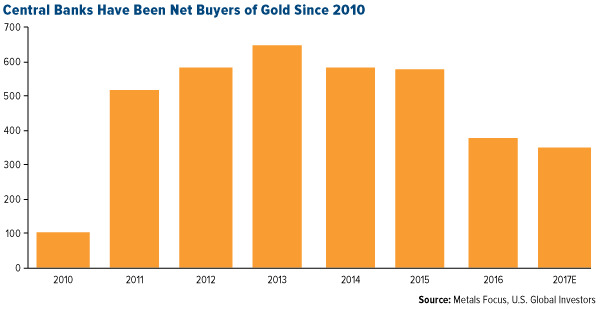 Because gold accounts for only 2.3% of China's reserves, as of March, the Asian country might very well keep up with its monthly purchases for some time. (The US, by comparison, has nearly 75% of its reserves in gold.)

I've pointed out before that it's reasonable for investors to pay attention to what central banks are doing. They're diversifying their assets and, in a way, hedging against their very own policies. It would be prudent for every household to do the same.