END_OF_DOCUMENT_TOKEN_TO_BE_REPLACED

Which country has been buying the most gold...?

Russia isn't alone, of course. Central banks as a group have been net buyers for at least two years now. But the 2012 data trickling out shows that the amount of tonnage being added is breaking records.

The following table lists the countries that have added to their gold reserves this year, while the second one tallies those that have been selling. You'll see how recently each country has reported, along with its percentage increase. 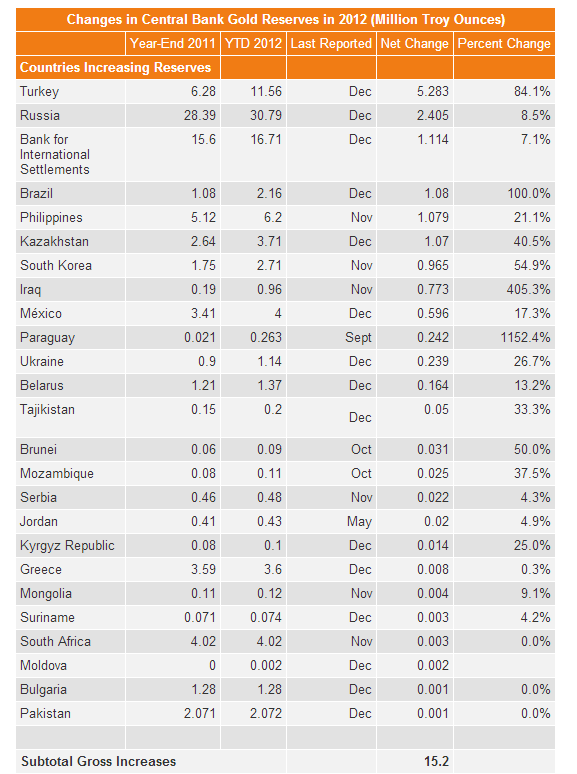 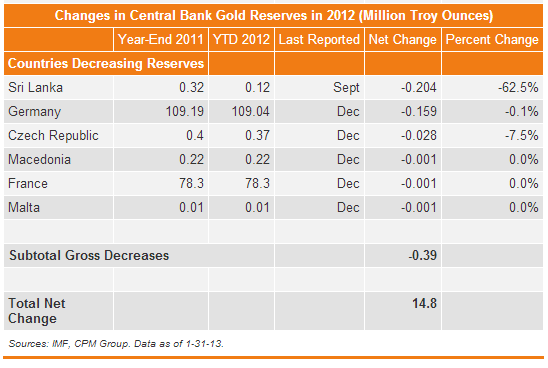 Based on current data, the net increase in central bank gold buying for 2012 was 14.8 million troy ounces – and that's before the final 2012 figures are in for all countries.

This is a dramatic increase, one bigger than most investors probably realize. To put it in perspective, on a net basis, central banks added more to their reserves last year than since 1964.The net increase – so far – is 17% greater than what was added in 2011, which was itself a year of record buying.

Here's a picture of total central bank reserves since the financial crisis hit. 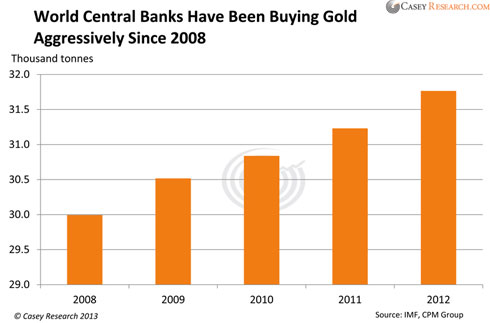 Whatever gold's price movements, positive or negative, central bank officials have continued adding a lot of ounces to their reserves.

But this understates the case, because most of the data exclude China, as well as a few other small countries. China last officially reported gold reserves in 2009, so the totals in the chart since then exclude whatever its purchases might have been.

Here's where it gets interesting: Bloomberg claimed that Russia has been a bigger buyer of gold over the past decade than China – by a full 25%. Based on data about gold imports through Hong Kong and the fact that, for the most part, Chinese production doesn't leave the country, it seemed to me that this could not be right.

The Chinese central bank holds an official 1,054 tonnes of gold in its reserves. Bloomberg states, based on IMF data, that China has added somewhere around 425 tonnes over the past decade.

I can't say exactly what the correct number is, but the Bloomberg number almost has to be wrong. Here's why:

So Bloomberg is essentially saying that roughly 10% of the total gold available inside the country during that period was added to China's reserves. While it's true that Chinese citizens are buying a lot of gold (though perhaps more silver), it's highly doubtful that private parties bought 90% of all the gold brought to the Chinese market during this period. I think – but can't prove – that China's central bank is buying more gold and at a faster pace than its Russian counterpart.

Jim Rickards, a highly respected author and hedge fund manager, said last month that China has probably already accumulated between 2,000 and 3,000 tonnes of additional gold reserves. If he's right, that would be roughly double or triple the 1,054 tonnes it reported in 2009 – not the 40% increase Bloomberg's numbers suggest.

At the very least, we can say that the Bloomberg report left consideration of China's imports and production out of its report naming Russia the top gold buyer of 2012. Okay...but so what?

Well, Jim thinks the next big catalyst for gold will be an announcement from China about its reserve position. Here's what he told me in late December:

"The catalyst for a spike into the $2,500 to $3,000 price range for gold will be an announcement by China, probably in late 2013 or 2014, that they have acquired 4,000 tonnes or more in their official reserve position. This will put China on an equal footing with the US in terms of a gold-to-GDP ratio, and validate gold as the real foundation of the international monetary system. Once that position is validated, gold will move to the $7,000 range in 2015 and beyond."

Even if Jim's estimate is high or China doesn't make an announcement until later, it's clear that central banks around the world are buying gold in record quantities.

It almost makes you wonder... do they know something we don't?

The Russians gave us some hints.

Evgeny Fedorov, a lawmaker for Putin's United Russia Party, said last week, "The more gold a country has, the more sovereignty it will have if there's a cataclysm with the Dollar, the Euro, the Pound, or any other reserve currency."

President Vladimir Putin told his central bank not to "shy away" from the metal, adding "After all, they're called gold and currency reserves for a reason."

The Chinese have been quiet on this topic recently, after being very vocal a few years ago. Here's a recent quote.

"The current international currency system is the product of the past," said Hu Jintao, General Secretary of the Communist Party of China.

Others have provided clues as well.

"We're in the midst of an international currency war," said Guido Mantega, finance minister of Brazil.

"Quantitative easing also works through exchange rates... The Fed could engage in much more aggressive quantitative easing, to further lower the Dollar," said Christina Romer, former chair of the Council of Economic Advisors.

Economist Kyle Bass recently spoke to a senior member of the Obama administration about its planned solutions for fixing the US economy and trade deficit. When he asked, "How are we going to grow exports if we won't allow nominal wage deflation?", the answer he got was, "We're just going to kill the Dollar."

Yes, we're talking about the US Dollar. Perhaps some investors have gotten complacent about the risks to the world's reserve currency – but not central bankers. It's not hard to see why: whether they admit it or not, central bankers must know what it means to run the printing presses the way the US has since 2008, even if price inflation is not immediately obvious. It's no surprise they want to hedge their bets, moving more reserves into something with actual value... something that can't be debased by a few computer keystrokes by an increasingly unfriendly government.

The US Dollar has been the world's reserve currency since WWII. That's beginning to change, and the movement into gold is just one facet of that change. The buying by central banks is exactly what one would expect to see as we approach the end of the Dollar hegemony.

The message from central banks is clear: they expect the Dollar to move inexorably lower. It doesn't matter that it's been holding up against other currencies or that the economy might be getting better. They're buying gold in record amounts because they see a significant shift coming with the status of the Dollar, and they need to protect themselves against that risk.

This leads to a second message: gold is not overpriced, in spite of the 500%+ increase since 2001. Indeed, with the recent correction, central banks are likely buying more, even as you read this.

Central bank gold buying will continue, of that we're certain. Even after Putin's binge, gold accounts for only 9.5% of Russia's total reserves. China's 1,054 tonnes is roughly 2% of its reserves. It's clear that both countries, along with others, have decided to accumulate as much gold as they can, as quickly as they can, before the Dollar's decline becomes more pronounced... and permanent. This could explain why some central banks don't publicize their purchases. It also means that Bloomberg and other mainstream media outlets could be caught off guard when China announces higher gold reserves than expected – perhaps much higher.

Clearly we should take notice. If central banks are preparing for a major change in the value of the Dollar, shouldn't we? The fact remains that the US Dollar cannot and will not survive the ongoing abuse heaped upon it by government planners and federal officials. That not only means the gold price will rise, but that many, if not most currencies, will lose a significant amount of purchasing power. This has direct implications for all of us.

Embrace the messages central bankers are telling us – the ones they tell with their actions, not their words.

Buying gold? See how BullionVault could dramatically cut your costs...