END_OF_DOCUMENT_TOKEN_TO_BE_REPLACED

Trying to blow up inflation, central bankers are very likely to get their wish...
HE USED aspirin, matches and rocket-powered roller skates, writes Tim Price at ThePriceOfEverything.
He also variously deployed an anvil, a weather balloon, a giant kite kit, nitro-glycerine, triple strength fortified leg muscle vitamins, and dehydrated boulders (just add water!). When these failed to work, he tried triple strength battleship steel armour plate, a jet bike and an outboard steamroller...
Undaunted, he also put to use bumblebees, tornado seeds, a jet-propelled pogo stick, a giant rubber band, and five miles of railroad track. Later innovations, invariably supplied by the ACME Corporation, included earthquake pills and an instant icicle-maker...
But it was all to no avail. Wile E. Coyote never managed to catch the Road Runner.
Today's central bankers have a far more elusive prey. They are trying to ignite inflation, and like Wile E. Coyote they are willing to use just about anything in their toolbox in pursuit of their objective. Quantitative easing, the process by which a central bank purchases financial assets with ex nihilo money, thereby injecting liquidity into the banking system, was first tried – briefly – in early 2001 by the Bank of Japan, which had run out of conventional tools in driving interest rates down to zero during the previous two years. The first iteration of QE was widely regarded as a failure; the neo-Keynesians, who cannot come across an economy without calling for government stimulus for it, claim that it failed because it was not pursued aggressively enough.
Why inflation? Why pursue a policy that explicitly punishes the prudent saver to the benefit of the foolishly overindebted (whether the latter category comprises a government, corporation or individual is somewhat moot)? Because without inflation, western governments, and the western banking system whose interests have fused with the interests of those governments, will fail.
Pensioners, savers, and investors on fixed incomes are all collateral damage in this war – governments' first and in fact sole priority is to erode their debt mountain through the stealth taxes of inflation and currency debasement.
Tony Deden of Edelweiss Holdings has written as follows:

"Mr Bernanke [and now his successor at the Fed, Janet Yellen] is wilfully trying to debase the Dollar. He will succeed. His colleagues at the ECB purport to be against such measures. This will not last long for they, too, will resort to coin-clipping. They too will fail. Today is Greece and Ireland. Tomorrow is Spain. Next month is Britain, France and a host of others. The following month is China, Japan, America and so forth. It may take years but the whole culture of credit and debt will fail. This is reality. We just do not know how or when."

Anticipating that 'when' is particularly troublesome, for asset managers and their clients alike. Dealing with the 'how', and attempting to protect capital during the process, is difficult enough. Fund managers Incrementum have nicely described the problem as the interplay between the forces of deflation (the free market's natural response to this crisis) and inflation (the knee-jerk policy response of governments and their client central banks), and in turn compared this interplay to the permanent pressure of two opposing tectonic plates.
Currency is being created (monetary inflation) by central banks. But currency is also being destroyed (monetary deflation) by banks, deleveraging within the commercial banking system. The problem would be less acute if Europe's banks had gone to the bother of restructuring after the original earthquake hit in 2008. They did not. We operate within a debt-based monetary system, so every time a bank calls in a loan or a borrower pays back a loan, money disappears from the financial system. Trying to balance these opposing forces, the task of every central banker, is going to become increasingly difficult. At some point it may become impossible. Central banks can clearly conjure up new money with abandon.
The early stages of inflationism come with rising financial markets and everybody enjoys the fun. Whether the situation is quite as amusing when more money-printing shows itself as powerless to effect economic stimulus on a corpse is another matter.
In the words of the late German economist Roland Baader, a student of Hayek:

"Falling prices or price deflation are not the cause of economic and financial crises, but their consequences – and at the same time, their cure."

And in the words of one of the most celebrated Austrian School economists, Ludwig von Mises:

Time for some charts. The first chart below, of half a century of Gilt yields, shows what good value 10-year UK government bonds currently are.
ten-year UK gilts currently yield roughly 2.5%. Retail price inflation (let's assume for the sake of argument that these figures are accurate and not distorted by bureaucratic whim) stands at 2.5%. For reasons that should be clear, we do not own any UK Gilts. 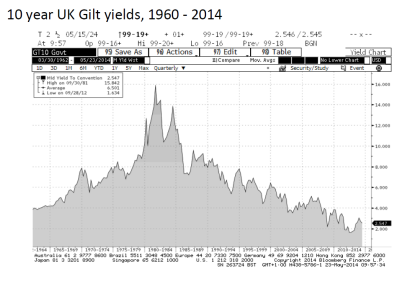 The second chart below shows just how exceptional our current circumstances are. In the entire history of the Bank of England (established 1694), interest rates have not been this low before.
Many investors today appear to have forgotten this fact. But why should they remember, when the stock market is effortlessly rising? 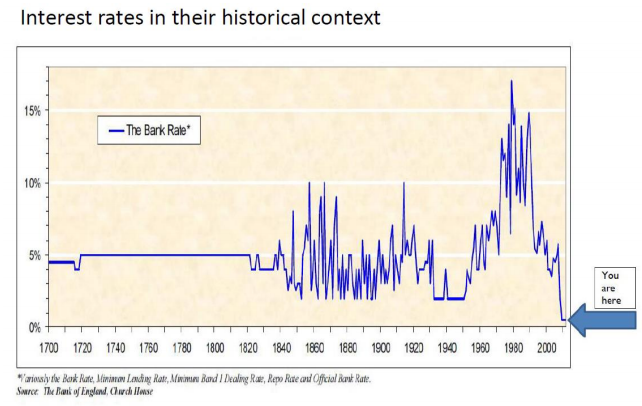 UK (and US) interest rates have clearly been in a bull cycle for over 30 years. Our contention is that this bull cycle in interest rates has been the prime mover behind the bull market in stocks. As fears of inflation have abated, equity investors have enjoyed a very powerful rally.
Of course, the answers to any and all of these questions will be supplied, in time, by central bankers. Otherwise intelligent people seem convinced that a nine-member committee at the Bank of England can know more about the economy, and therefore what interest rates are appropriate for that economy, than the 64 million people within that economy.
Bonds, as a whole, are clearly an unattractive asset class. Stock markets, taken as a whole, are close to their all-time highs – in nominal terms. All things equal, it makes more sense to buy financial assets at a cheap level than an expensive one. So that is now the sole focus of our investment efforts: trying to identify attractively priced businesses well away from the major indices; productive, purposeful businesses whose shares are trading (ideally) well below their intrinsic value. Nothing else makes any sense, and (as with any central banker, though they may not wish to acknowledge the fact) we cannot predict the future.