END_OF_DOCUMENT_TOKEN_TO_BE_REPLACED

When it's stuck to a wall with duct tape...
NEVER SAY we don't give you value here at BullionVault, writes Adrian Ash, director of research.
Because today...
...on top of providing the very cheapest access to the very finest gold bullion, live online 24 hours a day...
...we want to share this hot Christmas gift idea with you.
First, get yourself a roll of duct tape. Shiny grey is best.
Next, get a bunch of bananas. Deep yellow for preference, but unripe and green means your gift will last a little longer.
If the tape costs more than $5...or the bananas over $1.50...then you're spending way too much.
Next, cut off a piece of tape...
...and stick the banana to a wall.
That's it. You're done!
You have created your very own work of art, exactly like the sensational 'Comedian' by fun-loving Italian artist Maurizio Cattelan!
Here's one I made earlier. Or maybe it's the original. Who can tell? 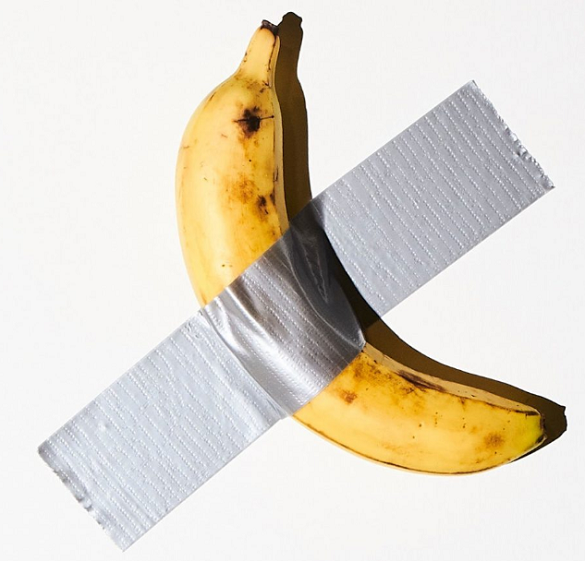 This headline-hitting piece retails for $120,000.
At least 2 museums paid that much each apparently...
...and Cattelen wanted $150,000 for the third edition of this series...
...until another side-splitting "artist" picked it off the wall and ate it.
But you can create this very same piece of art yourself at home right now...
...or better yet, wait a fortnight...
...and give it to the love of your life this Christmas with a saving of $199,993 or more.
Funny, right? Cattelan himself is widely known for his sense of humour...
...far funnier than Banksy with his blunt two-fingers to idiot collectors (one 'moron' spent £1.1m in September, just so that Banksy could use that very word to describe them) and with much more skill...
...creating such laugh-along chin-strokers as putting a live donkey beneath a chandelier in 1994...
...or putting Pope John Paul II under a meteorite in 1997's 'La Nona Hora'...
...before putting my personal favourite, the eerie 'Others', on rooftops and window ledges across the Venice Biennale in 2011...
...before, of course, casting a toilet from solid 18-carat gold and calling it 'America'.
The golden toilet became the butt of jokes about Donald Trump in his first year as President. Here in 2019 it is pranking the UK's own Keystone Cops, with the British police trying but failing to recover it after September's stunning theft from Blenheim Palace.
Unlike that multi-million dollar piece however, 'Comedian' squashes everything the art world and its assorted hangers-on love into just a few pennies.
Everything being irony...the first and last refuge of those who worry they missed life's punchline...or worse still, are its unwitting target.
"Don't make fun of the $120,000 banana – it's in on the joke" says one hack, protesting too loudly.
"Maurizio Cattelan is more than a prankster," says another, "and 'Comedian' – his potassium-rich latest work – is more than an overpriced piece of fruit."
See? They get it. Don't you? How awful to be left out!
But "The banana," claims Cattelan himself, "is supposed to be a banana."
Not Magritte's pipe then, nor R.Mutt's urinal. Except that the artist is wrong, says yet another critic.
"I have been dismayed to discover that for a work that has been endlessly photographed and parodied over the course of its one-week life, almost nobody has discussed that it is not just 'a banana'," spits the NY Times review.
"It is a banana and a piece of duct tape, and this is a significant difference."
Hahahaha! What priceless comedy. Well, almost.
"The artist and the gallerist arrived at the $120,000 price after several discussions," gushes ArtNet, "trying to strike a balance between an insignificant number that would trivialize the work, and an outlandish one that would be completely ridiculous."
"With its simple composition," adds Miami Beach gallery Art Basel, removing the piece from display to generate a few million more internet clicks, "'Comedian' ultimately offered a complex reflection of ourselves."
Dare to look in the mirror, dear investor?
Because we've clearly all gone bananas too. 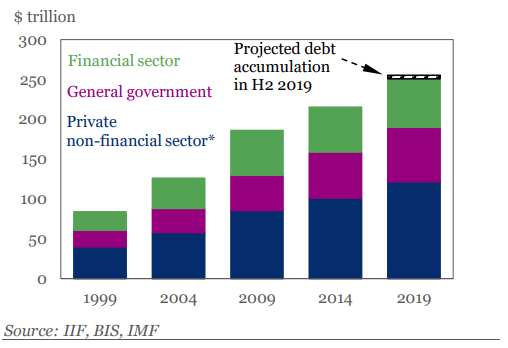 "Global debt on track to exceed $255 trillion in 2019," says the Institute of International Finance.
Like an artist charging $120,000 for a banana (plus tape), you can't blame the borrowers...
...not with interest rates near, at, or even below zero.
But the lenders? What are they thinking? Are they thinking at all?
US equities have meantime risen in 7 of last 10 years...
...setting a run of all-time record highs as New Year 2020 draws near.
Yet a third of S&P 500 companies have posted a year-on-year decline in earnings in 2019, as the Wall Street Journal notes.
"The last times the share of companies posting contracting earnings was that high: 2009, 2008 and 2002, all periods when the broader economy plus the stock market were in decline."
Hence today's stretched price/earnings ratio, now roundabout twice its historic average... 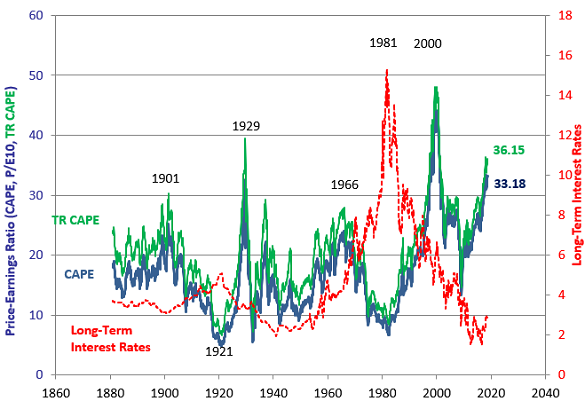 ...with Corporate America costing 33 years' earnings to buy, instead of the more usual 17x earnings on the Shiller CAPE measure of value (or 36 years against the average of 20x on Robert Shiller's new 'total returns' version).
There's nothing to stop P/E ratios rising still further of course. Not apart from a mass moment of clarity hitting investors. Or the roll of duct tape running out before valuations are suspended still higher. And like every other market top, chasing prices higher is all part of the fun in this record-breaking super-soaraway equity bull.
Indeed, 2019's most ironic giggle may have come this September, when French-Israeli squillionaire Patrick Drahi paid a 61% premium to buy auction-house Sotheby's and take it private, delisting the art world's  only publicly-traded venue from the stock market entirely.
Again, you can't blame the sellers. Drahi's offer, said Sotheby's chairman approvingly, "delivers a significant premium to market for our shareholders, including our employee shareholders."
But the buyer? Art markets tend to bubble most just before wider asset-price slumps begin. And drawing a line to link the tops in Sotheby's stock from the 1989 Japan Bubble's peak to the Tech Bubble top 10 years later and then to the Global Banking Bubble's last gasp of 2008, "If there is another bubble, a peak at $75 might be a reasonable guess for Sotheby's," reckoned investment bank and advisory Evercore back in 2015.
As it was, Drahi paid $57 per share to take NYSE: BID off the stock market this year.
Back to watching modern art prices then. You might have a little while yet before your retirement savings rot or get eaten as this bananas bubble bursts.