END_OF_DOCUMENT_TOKEN_TO_BE_REPLACED

The PRICE of gold and gold mining stocks were very competitive in 2017, writes Frank Holmes at US Global Investors.

The yellow metal ended the year up a little more than 13% – its best year since 2010 – while gold stocks, as measured by the NYSE Arca Gold Miners Index, gained more than 11%.

All of this occurred even as large-cap stocks regularly closed at all-time highs and cryptocurrencies invited massive speculation.

We can thank the Fear Trade for much of gold's performance last year. The Fear Trade, of course, is driven by low to negative real interest rates – when inflation erodes away at government bond yields – deficit spending, a weaker US Dollar and geopolitical uncertainty.

I believe these forces will only intensify in 2018. With inflation finally showing green shoots and President Donald Trump's $1.5 trillion tax reform law expected to increase deficit spending, this year could provide the right conditions to spur gold prices higher.

The risks inherent in the Federal Reserve's monetary policy tightening is a good place to start.

Since the Fed lifted rates last month, gold has behaved just as it did following the last two December rate hikes – that is, it's begun to appreciate. On the final trading day of 2017, gold broke above $1300 an ounce, a psychologically important level, and has since climbed an additional 1%. This is the first year since 2013, in fact, that gold has started the year above $1300. 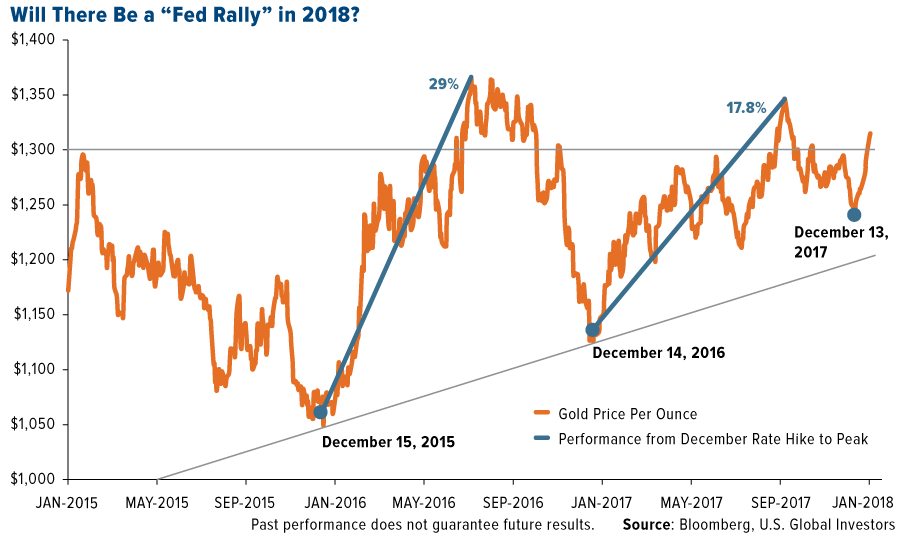 Obviously nothing is guaranteed, but let's say gold were to follow a similar trajectory this year as it did in 2016 and 2017. That would put gold somewhere between $1460 and $1600 an ounce by summer. These are prices we haven't seen in four years.

I think it's also worth pointing out in the chart above that support looks good for gold. For the past couple of years, it's steadily posted higher lows.

But wait – shouldn't rate hikes put a damper on gold prices? Gold, as I've discussed many times before, has typically thrived in a low-rate environment since it's a non-yielding asset. What's really happening here?

I'll let Jim Rickards, editor of Strategic Intelligence, field this question. In a recent Daily Reckoning article titled "The Next Great Bull Market in Gold Has Begun", Jim explains that the market is looking beyond the rate hike and asking what comes next...

"After all, the December rate hikes in 2015, 2016 and 2017 were all advertised well in advance by the Fed and were fully discounted by the market. This means that the rate hike was a nonevent, because gold was already priced for it.

"Yet the rate hike itself and the Fed's commentary suggest both a headwind for economic growth and possible Fed ease in the form of future inaction and forward guidance relative to expectations.
Gold markets, in other words, could be forecasting slower economic growth as a result of higher borrowing costs. You might not agree with Jim here, and I'm not asking you to. After all, the US economy is humming right now. Consumer spending is up, optimism is high and we have a robust labor market with unemployment at a 17-year low of 4.1%. Many people expect the Trump tax cuts to prompt multinational corporations to bring home cash that's been held overseas, lift wages and boost capex spending."

At the same time, we can't ignore the historical implications of past rate hike cycles.

In the past 100 years, only three such cycles out of at least 18 didn't end in a recession. The current cycle could turn out to be just as benign, but that would make it a huge exception, not the norm.

This measure is worth watching because it's often seen as one of the most reliable "canary in the coal mine" predictors of recession. The past seven US recessions were directly preceded by an inverted yield curve – that is, when short-term yields rose above long-term yields. 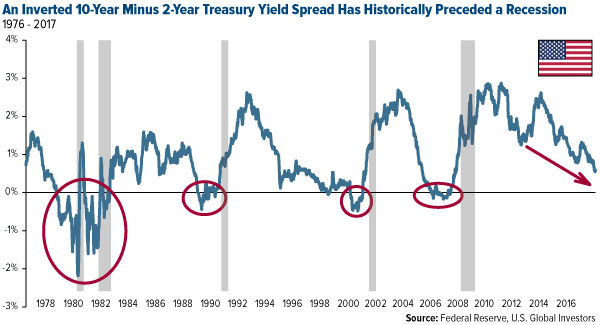 To be clear, we still have a way to go before the yield spread inverts. But if this observation concerns you – if you believe the business cycle is in fact getting a little long in the tooth – it might make sense to ensure you have a 10% weighting in gold bullion and high-quality gold mutual funds and ETFs.

Another factor that's driven gold prices in the past is inflation. When the cost of living has eaten away at government bond yields, investors have tended to seek more attractive stores of value, including gold. This is at the heart of gold's Fear Trade.

The problem is that inflation has been sluggish lately – if we're using the official consumer price index (CPI). In 2017, the CPI just barely met the Fed's 2% target rate. Many economists had expected prices to start creeping up last year in response to President Trump's nationalist "America first" agenda, complete with new tariffs, strong crackdown on illegal immigration, cancellation of US participation in the Trans-Pacific Partnership (TPP) and a renegotiation of the North American Free Trade Agreement (NAFTA). So far these policies haven't had much effect on inflation.

But what's the "real" inflation? Which gauge should we be looking at? Again, the CPI doesn't show much movement.

The underlying inflation gauge (UIG), however, tells a different story.

The UIG, introduced only last year by the New York Fed, is a much broader measure of inflation than the CPI. It includes not just consumer prices but also producer prices, commodity prices and financial asset prices.

When we use this dataset, we find that – surprise! – inflation is not as subdued as we initially thought. Whereas the November CPI came in at 2.2%, the UIG heated up to 3%, its highest reading since August 2006. 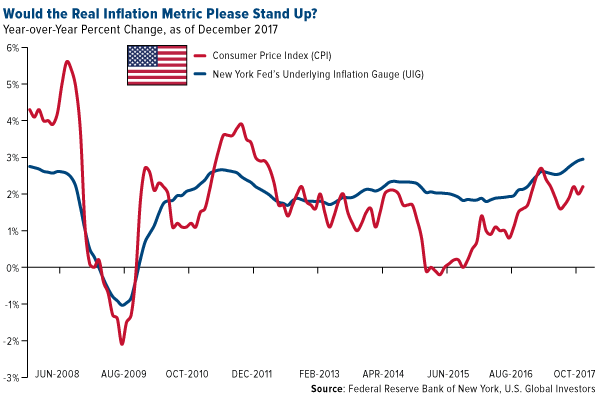 But there are even more ways to measure inflation, and some show it being higher than the UIG. Economist John Williams runs a website called Shadow Government Statistics, where you can find, among other "alternate" datasets, current inflation rates as is they were calculated the way the US government did pre-1980. Note the huge bifurcation between the official CPI and alternate 1980-based CPI. According to the alternate gauge, consumer prices in November rose close to 10% year-over-year, or 7.75 percentage points more than the CPI. 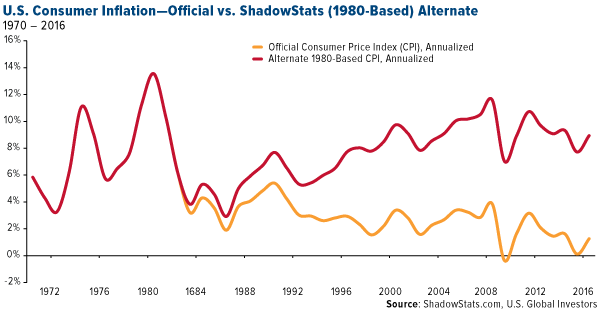 "In general terms," Williams writes, "methodological shifts in government reporting have depressed reported inflation, moving the concept of the CPI away from being a measure of the cost of living needed to maintain a constant standard of living."

So which metric do you believe? The official CPI? The 1980-based CPI? The broader UIG? If it's one of the last two, you have to ask yourself why you would lock your money up for five years, 10 years or even 30 years in a government bond that fails to keep up with real inflation.