END_OF_DOCUMENT_TOKEN_TO_BE_REPLACED

Sentiment, illusions and why you shouldn't trust "market" prices...

FEARFUL investors look to hedge their portfolios by buying "insurance" that will protect them if the market falls, writes Chris Mayer for the Daily Reckoning.

Right now, fear is super high, says Christopher Cole at Artemis. This past September, he says it cost more than ever to hedge against a collapse — even more than in 2008, when everyone was scared the whole system was going to blow. "Ironically," Cole writes, "markets are at their very best when everyone is scared out of their minds."

The worst crashes usually occur when investors are not prepared or excessively leveraged. Very rarely are you ambushed when you are totally ready for it. Widespread hedging provides an unseen floor to equity prices. In a hedged market, the majority of investors 1) are not forced to sell in a decline or 2) have the ability to buy on the dip.

Which is to say, as Cole does, "Fear is a better reason than fundamentals to own stocks right now." Stocks look expensive, he concedes. By his lights, it hardly matters.

What? Stocks are expensive but buy them anyway?

Cole trades volatility for a living, and I saw him make a presentation at Grant's Fall Investment Conference. I also dug out his recent paper "Volatility of an Impossible Object: Risk, Fear and Safety in Games of Perception." What follows are some thoughts on what he calls our "capitalist dystopia."

If volatility seems rather far removed from the grubby world of flesh and blood and companies, I agree. I am too steeped in the Marty Whitman tradition to buy stocks because the market is "fearful." (Whitman is the founder of the Third Avenue Value Fund and a longtime investment thinker par excellence. "Our interest is how the businesses in which we will invest will perform over the long term," Whitman once wrote, "rather than what investor-speculator sentiment might be short term.")

Still, Cole makes some well-known points in a memorable way.

For example, we know the Federal Reserve's manipulation of asset prices severely hampers our perceptions of market realities. Cole finds a neat metaphor for this. He likens the market to an impossible object — these are 2-D figures that cannot exist in three dimensions. "Famous examples include the Necker cube, the Penrose triangle, the devil's tuning fork and the artwork of M.C. Escher," he writes. My favorite is the Penrose staircase (see nearby illustration). 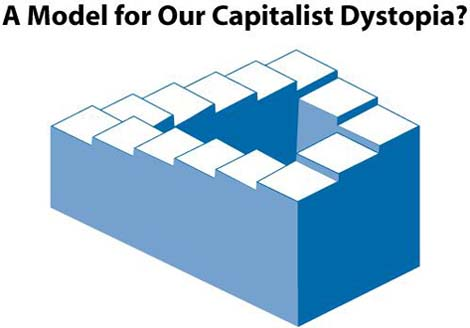 We live in a world that is nominally capitalistic. There are profits and losses. There are businesses and stock markets. There are interest rates and prices for commodities like oil and gold. We have the glitter and tinsel of capitalism. But do we have the real thing?

Real market prices reflect a process of price discovery. Buyers and sellers freely do their thing, and the results of their actions are the trails of prices those transactions leave behind. The signals these prices give off are what we rely on to plan and invest.

Cole believes that in today's modern financial system, this process is arrested to a degree that makes the whole thing a fiction or illusion. "In a world where global central banks manipulate the cost of risk," he writes in his third-quarter letter to investors, "the mechanics of price discovery have disengaged from reality."

Consider the Federal Reserve's recent announcement for so-called QE3. The Fed will buy mortgages in the form of unlimited $40 billion monthly purchases. It will also continue to keep interest rates low through "at least mid-2015."

These monetary experiments create all kinds of problems. Superlow interest rates create big funding gaps in pension plans, for example, which could lead to social unrest as those pensions can't make good on their promises.

Superlow interest rates also lead to the creation of a lot more debt on an already leveraged financial system, with little bang for the buck. Cole points out each $1 added in debt leads to ever smaller increments of economic growth. What the Fed is doing, essentially, is piling up lots of risks in the system to pump up stock prices in the short term. As Cole writes:

It is very hard to justify the risk-to-reward payoff of this monetary experiment. The defense of quantitative easing rests largely on an assessment of what would have happened to the economy absent its support. Nonetheless, we should fear the law of unintended consequences, because it takes a very small shift in perception to result in uncontrollable socioeconomic change. We may get higher asset prices today, but at the expense of inflation, class warfare, social unrest or something even worse tomorrow.

Cole points out that if the Federal Reserve follows through on its promise to buy mortgages to the tune of $40 billion per month, it will own the entire market in a decade. The Federal Reserve is already the largest holder of US Treasury debt. Keep in mind the Federal Reserve is hardly an economic agent in the sense of normal buyers and sellers. It has its own agenda and an unlimited playbook. It is, in short, the illusionist.

Cole goes pretty far with this. In fact, he says, "The market is no longer an expression of the economy… it is the economy." In other words, central bank strategy is trying to supplant the needs and wants of the market economy with its own ugly designs. It is as if the economy were a horse that pulled a cart. But the Fed wants to use the cart to pull the horse. Cole writes:

Our fiscal well-being is now prisoner to financial and monetary engineering of our own design. Central banking strategy does not hide this fact with the goal of creating the optional illusion of economic prosperity through artificially higher asset prices to stimulate the real economy. In doing so, they are exposing us all to hyperreality or what Baudrillard called "the desert of real." In Fed speak, this is what Bernanke calls the "wealth effect," and during his Sept. 13 press conference he explained the concept: "If people feel that their financial situation is better because their 401(k) looks better or for whatever reason… they are more willing to go out and spend, and that's going to provide demand that firms need in order to be willing to hire and to invest."

Jean Baudrillard was a French philosopher who wrote Simulacra and Simulation. This was the inspiration for the movie The Matrix. In the movie, people live ignorantly in a projected image that they believe is reality. In the same way, Cole argues, there is no real economy anymore — just false images.

I don't go as far as this. There is still a real economy. And it is more powerful, in the long run, than the Federal Reserve or any government. Ultimately, the fundamentals — profits, losses, balance sheets, competitive positions — matter. They matter more than sentiment or Fed maneuvering. When this real economy asserts itself, we have one of our periodic crises.

Bottom line: We must be careful when we weigh "market" prices. We have to think more creatively about what is real and what is smoke and mirrors.

Don't believe the Fed's goosing of the market is the real thing. Don't fall for credit-induced prosperity. More so than in the past, market prices can go up and down for reasons having nothing to do with the fundamentals. Yet in the long run, the fundamentals are the only thing that's real.