END_OF_DOCUMENT_TOKEN_TO_BE_REPLACED

Gold and silver remain good investments, so long as you go about it the right way...

So let's begin with the primary reasons to Buy Gold.

By 'monetary recklessness,' I mean the creation of money out of thin air and the application of more liquidity than the productive economy actually needs. The central banks of the world have been doing this for decades, not just since the onset of the great financial crisis.

In gold terms, the supply of above-ground gold is growing at roughly 3% per year, while money supply has been growing at nearly three times that yearly rate since 1980. 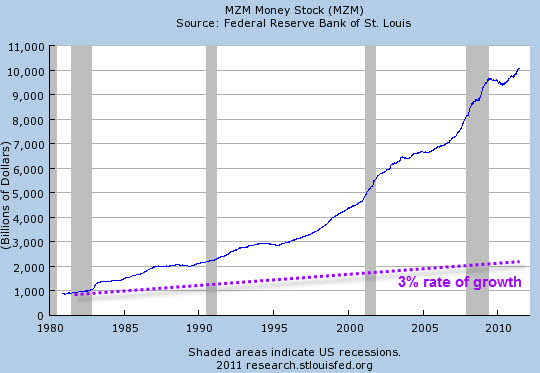 Now this is admittedly an unfair view, because the economy has been growing, too. But money and credit growth have handily outpaced even the upwardly distorted GDP measurements by a wide margin.

As the economy stagnates under this too-large debt load while the credit system continues to operate as if perpetual expansion were possible, look for all the resulting extra dollars to show up in prices of goods and services.

Real interest rates are deeply negative (meaning that the rate of inflation is higher than Treasury bond yields). This is a forced, manipulated outcome courtesy of central banks that are buying bonds with thin-air money. Historically, periods of negative real interest rates are nearly always associated with outsized returns for commodities, especially precious metals. If and when real interest rates turn positive, I will reconsider my holdings in gold and silver, but not until then.

That is as close to an absolute requirement as I have in this business.

Monetary policies across the developed world remain as accommodating as they've ever been. Even Greenspan's 1% blow-out special in 2003 was not as steeply negative in real terms as what Bernanke has recently engineered. But it is the highly aggressive and 'alternative' use of the Federal Reserve balance sheet to prop up insolvent banks and to sop up extra Treasury debt that really has me worried.

There seems to be no way to end these ever-expanding programs, and they seem to have become a permanent feature of the economic and financial landscape. In Europe, the equivalent would be the sovereign debt now found on the European Central Bank (ECB) balance sheet.

Federal deficits are seemingly out of control and are now stuck in the -$1.5 trillion range. Massive deficit spending has always been inflationary, and inflation is usually gold/silver friendly. Although not always, mind you, as the correlation is not strong, especially during mild inflation (less than 5%).

Note, for example, that gold fell from its high in 1980 all the way to its low in 1998, an 18 year period with plenty of mild inflation along the way. Sooner or later, though, I expect extraordinary budget deficits to translate into extraordinary inflation.

Reason #3, insurance against a major calamity in the banking system, is an important part of my rationale for holding gold. I'm not referring to "paper gold" either, which includes the various tradable vehicles (like the "GLD" ETF) that you can buy like stocks through your broker.

I'm talking about physical gold and silver because of their unusual ability to sit outside of the banking/monetary system and act as monetary assets.

All other financial assets – including your paper US money – is simultaneously somebody else's liability, but gold and silver are not. They are simply, boringly, just assets. This is a highly desirable characteristic that is not easily replicated.

Should the banking system suffer a systemic breakdown, to which I ascribe a reasonably high probability of greater than 1-in-4 over the next 5 years, I expect banks to close for some period of time. Whether it's two weeks or six months is unimportant; no matter the length of time, I'd prefer to be holding gold than bank deposits.

During a banking holiday, your money will be frozen and left just sitting there, even as everything priced in money (especially imported items) rocket up in price. By the time your money is again available to you, you may find that a large portion of it has been looted by the effects of a collapsing currency.

How do you avoid this? Easy; keep some 'money' out of the system to spend during an emergency. I always advocate three months of living expenses in cash, but you owe it to yourself to have gold and silver in your possession as well.

The final reason for holding gold, because it may be remonetized, is actually a very big draw for me. While the probability of this coming to pass may be low, the rewards would be very high.

Here are some numbers: The total amount of 'official gold,' or that held by central banks around the world, is 30,684 tonnes, or 987 million troy ounces. In 2008 the total amount of money stock in the world was roughly $60 trillion.

If the world wanted 100% gold backing of all existing money, then the implied price for an ounce of gold is $60 trillion divided by 987 million ounces – $60,790 per troy ounce.

Clearly that's a silly number (or is it?), but even a 10% partial backing of money yields $6,000 per ounce. The point here is not to bandy about outlandish numbers, but merely to point out that unless a great deal of the world's money stock is destroyed somehow, or a lot more official gold is bought from the market and placed into official hands, backing even a fraction of the world's money supply by gold will result in a far higher number than today's $1500 per ounce.