END_OF_DOCUMENT_TOKEN_TO_BE_REPLACED

What are the odds of a "buy low" correction in gold and Gold Mining stocks this summer...?

WHILE WE REMAIN convinced that gold and gold stocks are destined for much higher levels, buying when prices are low can mean the difference between a double or triple and a ten-bagger, writes Jeff Clark, senior editor of Casey's Gold & Resource Report.

For a US investor, that could mean the difference between a week in Malibu and a week in Milan.

There's no secret formula to buying gold low, and we aren't holding the right hand of Midas, but there are periods when prices tend to be lower than others. And if those tendencies play out, it can give us the opportunity to snag a high-quality asset at a bargain price.

So, how do you get a bargain price? You cheat.

I think the secret to getting a low-cost basis on all your gold and gold stocks is this: only buy on significant price pullbacks.

And this can be done without trading or using technical analysis.

I think there's a good chance we can cheat this summer. For example, here are the average monthly increases in gold since our bull market began in 2001. 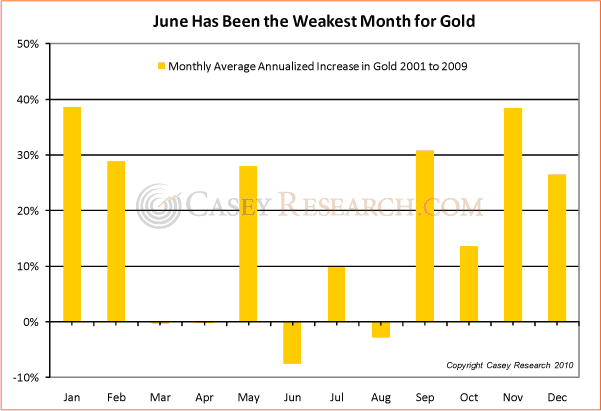 In our current 9-year bull market, June and August have seen the lowest average return for gold, representing one of the best times to buy.

You'll see that in the bull market of the 1970s, summer was also a good time to buy gold. 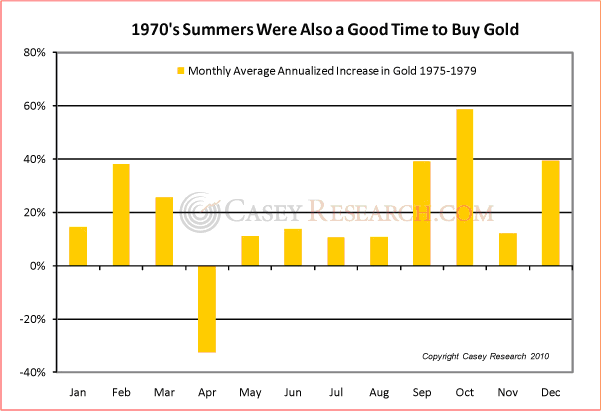 What about Gold Mining stocks? Since 2001, June and July have been among the weakest months and thus one of the best times to buy. 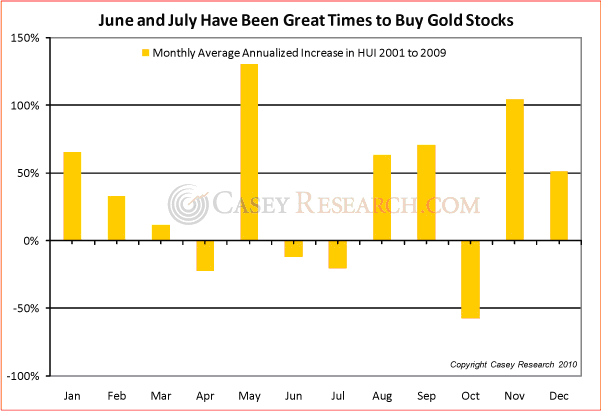 Obviously, these are price tendencies and not certainties. There were Junes when Gold Bullion was up, and some Julys when Gold Mining stocks were up.

Meaning, we'd avoid using these charts for trading purposes or in anticipation of an immediate gain. Instead, use these "trendencies" to look for possible price weakness. And if it arrives, use the opportunity to add to your holdings and position yourself for the next leg up in the bull market.

What are the odds of a correction in gold and Gold Mining stocks this summer?

Since 2001, almost every precious metal stock, in every summer, has moved lower from its May high. This includes gold and silver. There's no guarantee this won't be the summer of galloping unicorn herds, but the record is hard to argue with.

Here are the buy zones I identified for gold and Silver Prices, based on a tally of how far they've corrected from their May high to their summer low, in each year of the current bull market. 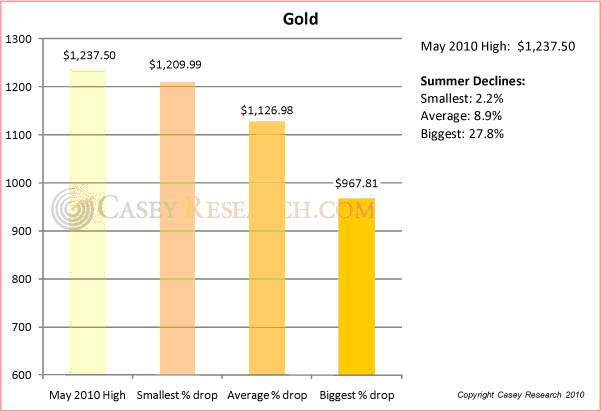 You'll see that the average price of all pullbacks in Gold Bullion, from the May highs to the summer lows, is 8.9%, and would take the price to $1,126.98 an ounce.

That's not to say this "low" price will be hit, but it tips you off that a fall to that level would not be out of the ordinary – and would also be an invitation to buy gold.

You can also see the smallest summer decline, which we've already exceeded. We wouldn't wait for the largest drop to materialize; there's a good chance you'd be left empty-handed and chasing the stock higher. 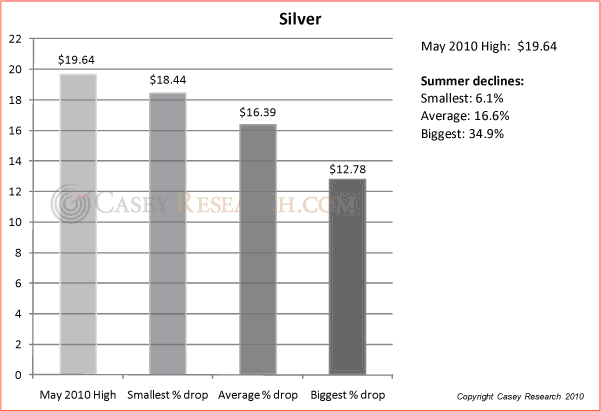 Silver is naturally more volatile, allowing us perhaps a better opportunity to buy low. The average summer decline for silver is 16.6%, which would take the price to $16.39 an ounce.

However, the furthest that Silver Bullion has fallen so far this summer is $17.36, meaning strictly on a historical price basis, a 10% correction from current levels would be perfectly normal. And again, an invitation to Buy Silver.

Whatever price (or prices) you select, however, I'd only use the charts to add to current positions, not for trading. The currency crisis Casey Research believes is inevitable could strike suddenly again and will eventually hit the US Dollar, and the last thing you want is to be left standing on the sidelines if gold and gold stocks surge higher. In our opinion, being completely out of precious metals in the middle of a once-in-a-generation bull market would be a mistake.

Instead, keep adding to your savings every month and buy when it feels like you're cheating.

Buy gold and silver at the very lowest prices possible, and store them more securely than anywhere else on earth, using world No.1 Bullion Vault...