END_OF_DOCUMENT_TOKEN_TO_BE_REPLACED

Ten years ago, this Trade of the Decade provided a great thematic backdrop for everything we would write here at The Daily Reckoning since then. We would write about the coming housing bust, about runaway government deficits and about lots of other things that provided absolutely no reason whatsoever to buy stocks, but plenty of reasons to Buy Gold.

So here's a picture of the last 10 years in a nutshell: you can see that gold performed very well and that stocks did not. In fact, stocks delivered a negative return. 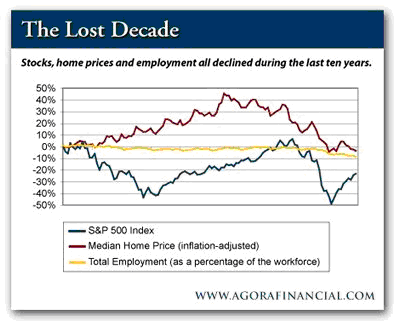 So we were right – more or less – about what we anticipated. But that's not really great news. I was talking to a married friend of mine recently and he said to me, "Eric, be careful what you wish for. I was chatting with my wife the other evening and I said, 'Honey, we really need to communicate more effectively. So if you don't tell me how you're feeling, I'm not going to know how to make you happy. And so she said, 'Okay, get off of me.'"

So now what? What's next for us investors? What's the next Trade of the Decade?

I don't know, but I'll offer a guess. Bill Bonner here at The Reckoning has offered his guess already – selling Long-dated Treasury bonds and buying deep-value Japanese stocks. I agree with the first half of the trade. But the second half of my Trade of the Decade is to buy uranium.

So my trade is to sell toxic assets and buy radioactive ones. I think this is a trade that will unfold nicely over 10 years, but over 10 weeks or 10 months I'm not so sure. So check back in 10 years and we'll see.

My Trade of the Decade derives from the idea that the US and most of the other Developed Nations – also known as Welfare States – have begun an irreversible decline, and meanwhile SOME Emerging Markets have begun a very long-term growth phase.

These divergent trends won't unfold in one day. In fact, they may not even unfold in one decade. But the time has arrived to begin considering the investment implications of these trends.

The good news is that even as mature economies like the US die, they won't be all bad. Many things improve as they die. I think of maple leaves, for example, and agave plants. I learned a little something about these Agave plants. They are "monocarpic". I didn't know that word. Now I do. Monocarpic plants flower just once, then die. It feels to me like the US is like a monocarpic plant that has just flowered. The bloom was spectacular.

We just enjoyed one of the most incredible economic performances of any nation ever, which morphed into one of the most spectacular credit bubbles of all time. But it feels like that's over now. The ensuing bust won't unfold all at once, but it will unfold. That's a guarantee. And one very solid clue that the bust is coming is that the government is trying to extend the bubble.

We know this about governments: They are good at borrowing. But when it comes to re-paying loans. Not so good. Some of you might have already known that governments sometimes default on their obligations. I was shocked to learn this. In fact, I couldn't believe it. So I Googled "government" and "default" and sure enough, my query returned 160,000,000 responses. When I changed the query to "government default on debt," I still got 10,000,000 responses. So I read some of those query results and it's true; governments do default sometimes. It's not moral and it's not right, but it happens.

I ran into a fascinating little tidbit from a book about French financial history entitled, The Undying Debt by Francois Velde. This is a story from the past. But it may also be a story from the future:

"With the opening of hostilities [in WWI], the Bank of France suspended the link between francs and gold, and part of the war was financed with large issues of paper currency. When France's prime minister re- established the link in 1928, he could only do so at 20% of its pre-war parity."

So in other words, the French got into a fix. They got out by defaulting on 80% of their obligations. The history of French financial management is not so different from that of any other nation. Time after time, France found itself a little short. And time after time, it defaulted...devalued...and reneged on its promises. To the extent that, over a three-century period of time, French government debt equal to ten ounces of gold – with a present value of well over €8,000 – was reduced, says Velde, to €1.20.

Oh mon Dieu! C'est pas vrai! Yes, it's true. Governments default just as inevitably as Agave plants flower. But the timing is uncertain. So where are we now in the fiscal lifecycle here in the US?

Well I'm going to share a few vignettes. No answers; just some observations.

Vignette #1: The government is taking over
Government here in the US – as well as several governments in Europe – is attempting to supplant aspects of the private sector. I don't think that's going to work. You cannot ever convert a parasite into a host. They are completely different organisms, which perform completely different functions. So right now we have credit contracting rapidly in the private sector, while it is expanding dramatically in the public sector.

Check out this chart: It shows employment trends in the greater Washington, DC area. 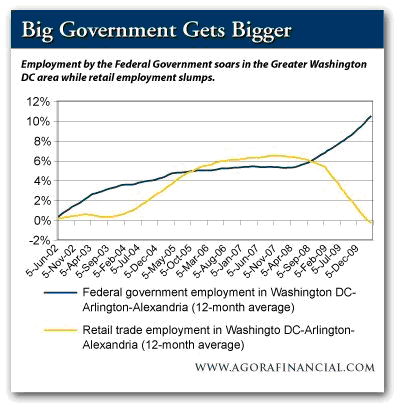 Vignette #2: Talented individuals are fleeing the US
In the recent past, 92% of Chinese PhD's in science and engineering would remain in the United States for at least five years after their studies. So would 85% of Indians. But last year, four researchers from Duke, Harvard, and Berkeley conducted a survey of more than 1,200 foreign-born students. The percentage of Chinese who plan to stay in the US after graduation is now just 54%, while the number of Indians who expect to remain is just 58%.

Vignette #3: An abysmal fiscal trend is unfolding
The US crossed the $1 trillion deficit level for the first time in 1981, and 28 years later, we've added another $11 trillion. The deficit stands at $12.4 trillion right now and over the next ten years, US debt is forecast to reach $25 trillion - pushing very close to Greek-like levels of debt-to-GDP... 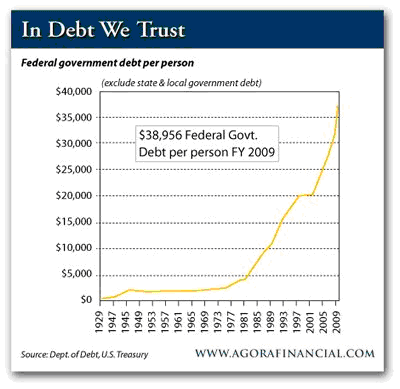 In the last ten years US Federal Debt per person has gone from $20,000 to $40,000. If we were to also include the present value of the government's future unfunded liabilities like Social Security and Medicare, the debt per person would soar to more than $250,000!

Vignette #4: Geopolitical risks could exacerbate fiscal weakness
On top of bad fiscal trends, you've got omnipresent geopolitical risks that are always lurking in the shadows. Some senior Chinese military officers proposed recently that their country should sell some US bonds to punish Washington for its latest round of arms sales to Taiwan.

"Our retaliation should not be restricted to merely military matters," Luo Yuan, a researcher at the Academy of Military Sciences, told Reuters, "For example, we could sanction [the US] using economic means, such as dumping some US government bonds."

Geopolitical tensions are not only a China-US thing, they are also a Germany-Greece thing. Everyone thinks Greece will pull out of its mess with austerity measures and German bailouts. I'm not so sure about either assumption. Of almost 31,000 votes cast in an online survey by the German daily Bild, 82% of respondents said the European Union should not rescue Greece. And an editorial in the same paper declared, "The proud, cheating, profligate Greeks" ought to be "thrown out of the euro on their ear." I think this editorial expresses a very pervasive view in Europe that is not expressed by the politicians, but it is one that will influence their decision-making.

Unfortunately, Greece's finances are not unique; they are emblematic. Sovereign borrowers are out of control. Greece is just an icon for all of Europe, and also the US.
So I view Greece as the Bear Stearns of the upcoming sovereign debt crisis. You may recall that in June, 2007, Bear Stearns stepped in to bail out two of its own hedge funds by pledging collateral for a $3.2 billion loan.

Nine months later, in March, 2008, JP Morgan Chase took over a functionally bankrupt Bear. And at that point most of the official Wall Street elite believed that the crisis had been averted. But six months later, on September 15, 2008, Lehman Bros. filed for bankruptcy. And the rest is history. It is amazing to remember that 15 months elapsed between the first signs of difficulty in the US financial sector and Lehman's bankruptcy.

So mark your calendars; the Sovereign debt crisis should unfurl by May 2011 – that would be about 15 months after the initial headlines about Greece.

Now the financial news is not all bad, however. In the Developing World we have some shining stars. And I would be putting my capital there.