END_OF_DOCUMENT_TOKEN_TO_BE_REPLACED

Buy bullion or the Nasdaq? Check the correlations...
PITY the poor trading strategist, writes Adrian Ash at BullionVault.
No sooner do you tip buying gold over investing in tech stocks on Bloomberg TV than bullion prices fall 2% from a 4-week high while the Nasdaq 100 adds more than that in one day to reach a 3-month high.
And no sooner do you say that real interest rates have peaked because of recession risk – leading to your hot tip on gold over tech stocks – than the yield on 10-year TIPS jumps fastest since it peaked more than half-a-percentage point higher 7 weeks earlier. 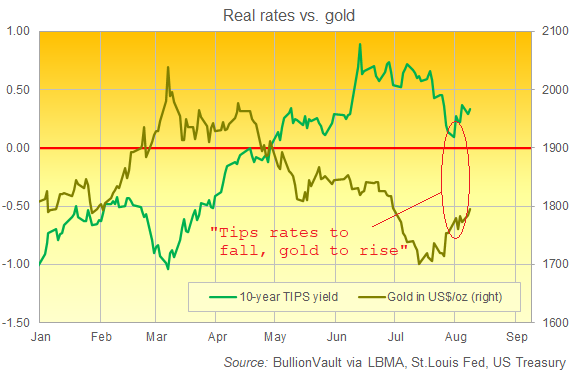 Still, real yields have now edged back again since Mandy Xu, chief equity derivatives strategist at Swiss bank Credit Suisse, spoke to Bloomberg on Monday last week.
Prices to buy gold have meantime edged higher, briefly topping $1800 for the first time in a month...
...while the Nasdaq 100 – stacked full of US-listed tech stonks such as Apple, Microsoft, Amazon, Facebook, Tesla and Netflix – has dipped but rallied, rising back towards its highest since early May.
What to make of it all? Have interest rates really got as high as they're going to once you account for inflation? If so, is buying gold a better bet than tech as the real cost of borrowing falls?
No mistake, the connection between gold prices and real yields – meaning the annual after-inflation return to US bondholders as implied by Treasury inflation-protected securities – is usually strong and clear.
That relationship is also typically inverse. Meaning in more everyday terms that gold tends to rise when TIPS yields are falling, and vice versa.
At least, that's how it tended to work up until the last 12 months or so. 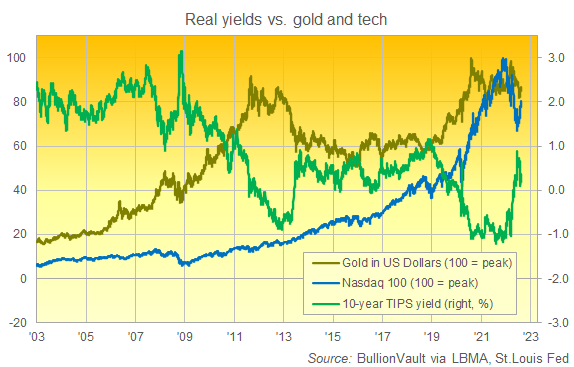 Tech stocks have from time to time shown a similar relationship to real yields, most especially in the last couple of years.
Indeed, as the TIPS yield sank during the Covid Crisis – implying that returns to fixed-income investors would badly lag inflation – both gold and the Nasdaq 100 index rose sharply and hit fresh all-time highs on the historic flood of stay-home stimulus from central banks and government.
This made sense. Gold pays no interest but can't be created or go bust. That makes the appeal of buying bullion shine when the economy tanks.
The Nasdaq 100 is meantime stacked full of US-listed tech stonks such as Apple, Microsoft, Amazon, Facebook, Netflix and the all rest of those gadget makers, home shopping and streaming entertainment suppliers who hit record pay-dirt when the pandemic struck and most everyone had to stay at home.
Since then, however, gold dropped back as TIPS yields stopped falling, but tech just kept running higher, setting fresh all-time highs right up until real yields suddenly turned higher at the end of 2021.
Russia's latest invasion of Ukraine then saw gold jump back to summer 2020's record highs above $2000 this spring, even while the energy-price crisis saw the real cost of borrowing shoot higher thanks to bond investors and speculators betting that the Fed would have to hike interest rates hard to try denting inflation.
Tech, in contrast, sank as real yields rose, only to bounce as those yields turned lower again starting in mid-June.
What comes next?
If those real yields do now resume their fall, says Xu at CS, then out of what she calls the 2 common trades speculators might make when real rates drop, "Going long gold is [now] a much better play than tech [stocks]."
Why? It's because, with the current economic outlook so poor, bond yields are likely to fall thanks to "rising recession risk...and that doesn't bode well for tech as a cyclical sector". Because consumers won't buy so many gadgets or streaming subscriptions as wages and jobs shrink with the economy.
Now, whether the US is already in recession after shrinking for 2 calendar quarters in a row remains debatable among the people who get to define such things. More debatable still is the outlook for real yields.
Inflation forecasts in the bond market have popped higher in the last couple of weeks. But they peaked pretty much along with copper and crude oil prices back when Russia started killing Ukrainian civilians again this spring. Those true both for the simple 'break-even' inflation rates, and for the more respectable 5-over-5 measure too. And those forecasts – should they keep falling – would drive real yields higher, all other things equal. Because inflation would be eating less of the return paid to bondholders in the annual yield they offer.
Central banks everywhere also seem committed to raising the real rate of interest. They could hardly hope to make it more negative, after all! Led by the US Fed, they keep vowing to keep hiking interest rates until current inflation in consumer prices – now running near or above 9% across the rich Western world – sinks back to their 2% target. That would mark quite the jump in current real rates. It would no doubt have a marked impact in driving TIPS yields sharply higher as well.
So forget about how deeply negative that still leaves central-bank rates right now in real after-inflation terms. Forget about how conventional 10-year US Treasury yields are also lagging actual inflation by the widest margin ever as well.
What counts for gold, as Xu suggests, is very often the direction of travel in real yields. It really mattered in 2013, for instance, when real rates leapt and gold prices crashed. It really mattered again in mid-2019 through the crisis phase of the following year's Covid pandemic, when real rates sank and gold prices leapt to $2000 per ounce.
Real rates up and gold falls. Down and gold rises. Some if not most of the time at least. But not so much recently.
That recent change might really matter as well. 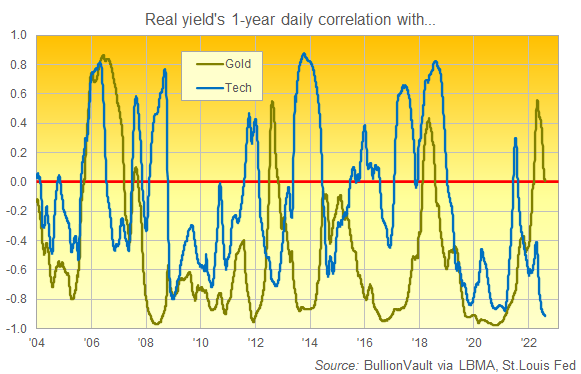 Statisticians use the 'r coefficient' of correlation to measure how closely 2 things move together.
If it reads +1.0 over a certain period of time, then those 2 things have been moving exactly in lockstep. If it reads minus 1.0 then they were moving exactly opposite. And if it reads 0.0 then they don't show any relationship at all.
For gold prices, and over the last decade on a rolling 1-year basis, the metal has typically shown a strongly inverse daily correlation with 10-year TIPS yields. The median r-coefficient is minus 0.63, having been higher than that for half of the time and lower than that for the other half. All told, that correlation has been negative – meaning that the Dollar gold price was moving in the opposite direction to real US yields – nearly 85% of the time.
For the Nasdaq 100 index in contrast, that median figure over the last decade is only minus 0.17, and while the correlation has been negative 63% of the time, it simply hasn't come close to matching the strength of gold's consistently strong inverse relationship with real yields.
But right here, right now, those facts have more than flipped around. Tech stocks have never been more negatively correlated with TIPS yields than they have over the last 12 months. Gold in contrast has just shown its strongest positive correlation with TIPS yields since way back at the end of 2006, before the global financial crisis began.
You can see this on our chart above. Gold's rolling 1-year r-squared with 10-year TIPS yields peaked at +0.56 this April – the highest reading in 16 years, signalling that they had been moving very much together, rather than opposite.  most positive correlation, since
That markedly positive correlation was achieved because gold prices rose this spring to all-time record highs even as real yields rose at their fastest pace since spring 2013, back when the surge in real yields coincided with the bullion-market's worst crash since the early 1980s.
Gold, in other words, has been more out of kilter with its usual correlation against real yields than pretty much ever. Whereas the Nasdaq's rolling 1-year correlation with real yields is showing a record negative relationship so far in August, giving a figure of minus 0.91.
Now look at our chart again. See how extreme readings in these correlations always reverse sharply? See how those reversals then tend to run and run, pulling the correlation close to zero if not far into the opposite side of the red line dividing positive from negative?
Nothing is certain, of course. The past is no guide to the future, in fact, if you believe what some financial regulators would like financial-product providers to say in their risk warnings.
But if you don't study history, what exactly do you plan to build your analysis on instead? And if you accept that the past 2 decades might offer some hints if not a map for picking your way through the future, then gold's relationship with real rates looks likely to become negative once more. Indeed, it's already sunk from the most positive since 2006 to read just 0.01 right now.
Tech's relationship in contrast is likely to turn higher from its current record low, becoming less positive if not flipping into a positive correlation.
All this, in short, supports that tip from Mandy Xu at Credit Suisse: If real rates drop further from June's peak, buying gold may very well prove a better investment than buying tech.
The bigger question remains, however: What direction will real rates take from here?
Because if a reversal from their recent and current extremes takes hold, then falling TIPS yields are likely to see prices to buy gold rise...while tech stocks struggle to gain if not fall.
But vice versa too.