END_OF_DOCUMENT_TOKEN_TO_BE_REPLACED

Race to buy gold with demonetised Rs500 and Rs1000 now under investigation...
INDIA's sudden announcement last Tuesday that its largest banknotes would no longer be legal tender that midnight spurred a rush to buy gold ahead of the deadline, according to media and analysts' reports, but may now dent the country's already weakened imports of bullion.
Formerly the world's No.1 gold consumer market, India had seen demand sink in 2016 to date after a series of tax hikes and government crack-downs on undeclared personal wealth, culminating with last week's move.
Asked India's citizens to make a "grand sacrifice" to help cleanse the country of "termites", Prime Minister Narendra Modi said late afternoon last Tuesday that the 500 Rupee and 1000 Rupee banknotes would both cease to be legal tender that midnight, cancelling some 86% of all cash in circulation by value.
Owners now have until 30 December to exchange their remaining ₹500 and ₹1000 notes, and can receive a maximum of only ₹4,500 in lower denomination cash. Everything above that will be credited into their bank account – potentially risking questions about the source of the money as well as a forced declaration to the tax authorities.
The Reserve Bank of India – now launching new ₹500 and ₹2000 notes with extra security features – says the move is needed to counter huge levels of fake notes.
Fake ₹2000 notes were already being used by Friday, according to media reports, with one farmer apparently duped by a photocopy.
Prime Minister Modi meantime says the move will fight "the specter of corruption and black money" – meaning corrupt payments and undeclared income – "[which] has weakened the effort to remove poverty."
Only 1% of India's population paid any income tax last year, according to figures released by the government.
Bank account penetration in India increased sharply in recent years, enabling savers to deposit some 2 trillion Rupees ($30bn) in just the first two days of the new scheme.
But 47% of the population remained "unbanked" by end-2014 on World Bank figures, most notably in rural states – source of two-thirds of India's demand to buy gold, where the metal acts as an indestructible store of value between harvest and the next planting season. 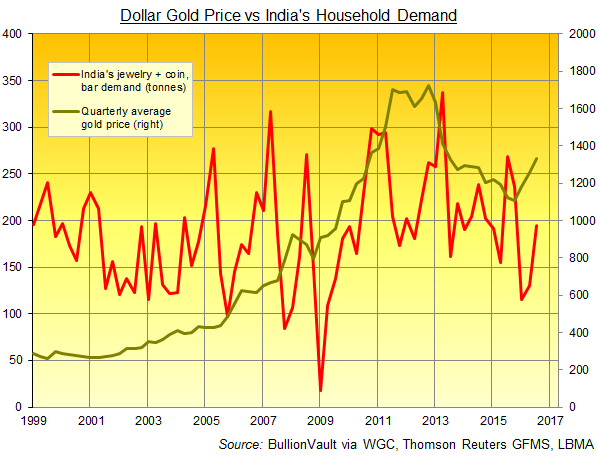 With many ATMs still shut across the country and others being emptied as soon as they're re-stocked with lower value notes, the Modi administration yesterday eased rules on bank withdrawals and sought to reassure people that cash supplies are sufficient to keep the economy running.
Hearing a legal challenge to the demonetisation scheme today, not everyone holding ₹500 and ₹1000 notes "can be painted as a black money hoarder" said India's Supreme Court, failing to stay the Government's action but adjourning its hearing until 25 November and warning the Modi administration that its policy looks like "carpet bombing and not [a] surgical strike...[likely to cause] collateral damage" amongst poorer and law-abiding households.
"There was a rush of people [to buy gold] and the prices...jumped by close to Rs4,000 to touch ₹35,000 per 10 grams," The Hindu quotes one dealer in Mumbai's Zaveri Bazaar – a short-lived premium to global prices of 30% amid 2016's otherwise unusually heavy and persistent discounts.
"Gold available...before the announcement of the demonetisation has been sold out," The Business Standard quotes Prithviraj Kothari, managing director of national supplier RiddiSiddhi Bullions.
"[But] jewellers are deferring fresh purchases because of uncertainty over the next government move to control black money. It is, therefore, better to wait for now."
Come Wednesday – and "even though the [Hindu] wedding season is about to start" – Zaveri Bazaar "was almost deserted," reports specialist consultancy Metals Focus, calling this "unsurprising" because 60% of India's gold buying is done with cash, and the largest notes – currently worth $7.40 and $15.80 respectively – are "the most popular to use.
"The longer-term impact on the gold market is more uncertain. Even allowing for the benefits to the formal sector, the damage to the parallel [ie, black market] economy could see Indian gold demand eventually weaken."
"The ban on high-value notes has disrupted smuggling network," agrees Daman Prakash Rathod at wholesalers MNC Bullion in Chennai.
Thanks to India's 10% gold import duty, some estimates put illegal inflows of gold at two-thirds of India's total for 2016 to date.
Searches for "How to convert black money into white money" jumped on Google India last week, the Bloomberg newswire notes.
Excise officials from the Finance Ministry are now pursuing more than 600 jewellers across 25 cities for details of sales made since 7 November – the day before Modi's announcement – according to the Economic Times.
Political opponents accuse the Prime Minister of tipping off friends and close supporters in advance, so they could buy gold before the sudden midnight deadline Tuesday.
Now with 24.3 million followers on social media site Twitter, Modi lost 300,000 followers immediately after the move, reports New18.com.
"GST was good economics; the demonetization is not," tweeted former World Bank and India Finance Ministry chief economist Kaushik Basu, contrasting the Modi government's cancellation of large banknotes with its General Sales Tax drive to unify and simplify the country's sales tax regime.
"Its economics is complex and the collateral damage is likely to far outstrip the benefits."