END_OF_DOCUMENT_TOKEN_TO_BE_REPLACED

Is confidence in stocks and the economy unjustifiably high...?

WE DON'T like the looks of it, writes Daily Reckoning founder Bill Bonner.

All up and down Wall Street...in central banks and in Washington...the stuff that goeth before the fall is thick, sticky and stinky.

The economy is recovering, they say. The Federal Reserve has the situation in hand, they add. Don't worry...we know what we're doing, they assure us.

Barron's magazine says the Dow is going to 16,000, illustrated with a picture of a bull on a pogo stick. 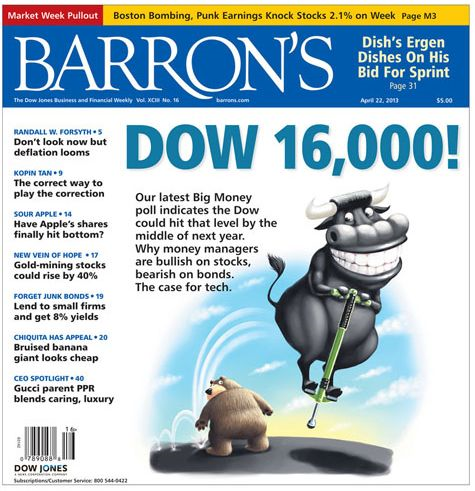 Prime Minister Abe says he'll revive the Japanese economy by printing Yen to buy Japanese bonds. And speculators take each hint from the Fed as though it were a whisper from God Himself.

And all around them, the real economy struggles to stay even. Here's David Rosenberg of Gluskin Sheff with 12 signs that the US economy is weaker than we think:

Do you believe them, dear reader? We don't. We're just giving the dreamers a little taste of their own medicine.

And when prices rise, the opinion mongers look for reasons to explain why they have become so bullish. They find indexes, statistics, numbers – all the 'facts' confirm their opinion. When prices fall, their opinions grow dark and they need to find new facts that they can use to justify a counter view.

Get a feeling. Form an opinion. Find a fact and pretend that you are a rational, reasonable investor. That's the name of the game.

But are we any different?

Not at all. We're just crankier. More cynical. And less impressed by authority in all its forms. Besides, we've been living in Argentina.

If a Nobel Prize-winning economist tells us that the economy is improving, what do we really know?

We know he can talk!

If the president tells us that he and his friends are making the world a better place, what do we do? We laugh!

If a leading financial magazine tells us that the 'Big Money' firmly believes the Dow is headed higher, what do we do?

From bearish fund manager John Hussman: 'Rule o' Thumb: When the cover of a major financial magazine features a cartoon of a bull leaping through the air on a pogo stick, it's probably about time to cash in the chips.'