END_OF_DOCUMENT_TOKEN_TO_BE_REPLACED

America's problems run much deeper than the fiscal cliff...

WE ARE in Nicaragua, writes Daily Reckoning founder Bill Bonner. Here, time slides by like a snake. It hardly rustles the leaves or disturbs the grass. There seems no need to check the news.

Checking in over the weekend, we find little has changed. After the Obama election win was announced, stocks lost ground. Then, late last week, they recovered some of what they had lost.

What is important? What is going on that could affect our wealth and our lives?

The papers are still talking about the fiscal cliff. This, from Reuters, brings us up to date.

'The S&P 500 rebounded from a 1 percent decline, gaining more than 20 points from its low after Boehner, an Ohio Republican, said he was optimistic that a budget deal to avoid big spending cuts and tax hikes can be worked out. President Barack Obama added to the good feelings, saying he hoped to get a deal done in the next four weeks.

'Whether or not those remarks reflect the reality of negotiations is another story.

'"The fiscal cliff is dominating the discussion, and short term, we're a little bit too optimistic on it being fixed right away," said John Manley, chief equity strategist for Wells Fargo Advantage Funds in New York.'

... and the nation will continue on the road to destruction.

Why destruction? Because that's what you get when you spend a lot more than you make... and you can't stop yourself.

Our thinking on this issue has evolved. We're beginning to understand what we previously only guessed. When governments – especially democracies – head for disaster, they can't turn around. Because the farther they go, the more voters have an interest in going further.

Half of US families get money from the government. Half of the voters pay no taxes. And the more industries the feds subsidize, bail out or sponsor, the more people – directly or indirectly – want to see the whole thing continue.

Check this out. The bubble in student debt is blowing up. These loans, backed by the US government, are going into default at an alarming rate: 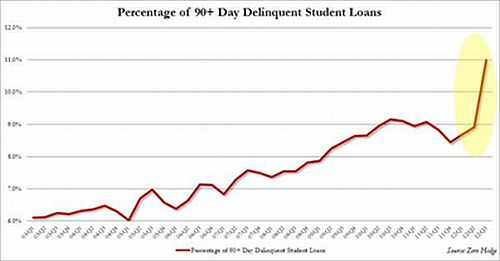 Here's the story: the real federal deficit for this year – including unfunded Medicare and Social Security obligation – is more than $7trn. That's 21 times the amount of additional growth for the same period. It is as if you got a $1,000 raise and spent an additional $21,000.

How long could you keep that up? Well...that's what we're going to find out.

Meanwhile, the total debt, when you take Medicare and Social Security into account, is not the widely reported $16trn. It's $86trn... five times GDP and going up fast. And that's also why the fiscal cliff babble is a waste of time. It is a pine needle in a forest. Insignificant. Trivial.

One way or another, the feds will have to default. How? Directly and honestly, by announcing to the world that they can't honor their commitments? 'Sorry, bondholders... sorry, old people...we don't have the money we promised.'

Or, will they take the easy way out...printing up new money to cover shortfalls until the whole system explodes?

Hope for the best, dear reader...but protect yourself from the worst.

Thinking about buying gold? Visit BullionVault to find out more, including how to get the safest gold at the lowest price...