END_OF_DOCUMENT_TOKEN_TO_BE_REPLACED

BRITAIN and other western economies face a major adjustment to a dramatic change in the economic climate which has occurred since the financial crisis, writes Andrew Sentance, former member of the Bank of England's Monetary Policy Committee.

The long period of economic growth from the 1980s through to 2007 (briefly interrupted by the early 1990s recession) was supported by easy money, cheap imports and strong confidence in the ability of governments and central banks to sustain steady growth and stable economic conditions.

These conditions have been undermined by the financial crisis and successive bursts of global inflation, driven by strong growth in Asia and other emerging market economies. Confidence in the ability of governments and central banks to sustain growth has been severely eroded.

In this "new normal" world, consumer-facing businesses, like retailing, face particular challenges. Not only has the macroeconomic environment become less favourable. Consumers are also shifting their patterns of spending, taking advantage of the new opportunities created by the internet.

This inflation-induced squeeze is easing in the short-term, with UK CPI inflation dropping to 2.2% in September 2012. But a new round of food and energy price rises is coming through the pipeline. So September's figure is likely to be the trough of the recent inflation cycle. And when the global economy starts to pick up again in 2013 and 2014 – as most economic forecasters expect – these imported price pressures are likely to intensify.

In addition to these general factors squeezing consumer spending, traditional retailers face another structural challenge – a massive disparity between the growth in online sales and retail spending through traditional retail stores. Since 2007, the share of internet sales in retail sales (excluding motor fuel) has risen from less than 4% to over 10% – with internet spending growing at around 25% per annum in value terms. As a result, retail spending through stores has grown at 1.3% per annum in value terms since 2007, around 2% per annum below the pre-2007 growth rate. 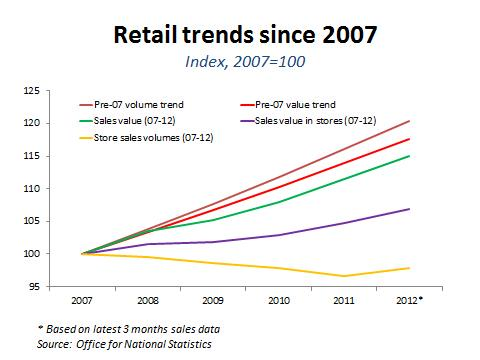 The combined impact of the shift to internet sales and macroeconomic factors means that the volume of retail sales through traditional outlets is now around 20% below the level implied by a continuation of pre-2007 trends (see chart). This is creating pressure for a major structural adjustment in the retail sector. There are already high vacancy rates for retail properties, particularly outside the south of England. And recent research by PwC has revealed that multiple store chains made a net reduction of nearly 1,000 outlets in the first half of 2012 – a reduction of 1.4% in the total number of shops.

The outlook for UK consumer spending is for a gradual recovery in 2013 and growth of 1.5-2% per annum in the mid-2010s. However, this is around half the rate of consumer spending growth seen in the decade prior to the financial crisis. The challenges facing the retail sector which are now apparent are likely to persist for some time.

In this environment, it seems reasonable to expect further structural change in the retail sector. Along with other consumer-facing sectors, retailing faces a big adjustment to the "new normal" world of constrained finance, higher inflation and weak confidence. The growth of online retailing will contribute to this process of structural change. Retailers which can realise the cost and convenience advantages of multi-channel retailing will be much better positioned to achieve sales growth and protect profit margins than those locked into large legacy property portfolios.

You can download a more detailed paper on the implications of the "new normal" world for UK consumers and retailers here.

Looking to preserve your wealth with a Gold Investment? Visit BullionVault...