END_OF_DOCUMENT_TOKEN_TO_BE_REPLACED

The academic insists on fighting an enemy that he, alone, can see...

The US TREASURY BOND MARKET has been rallying – more or less – for the last 30 years, writes Eric Fry in The Daily Reckoning.

Back in 1981, when then-Federal Reserve Chairman, Paul Volcker, was battling to contain hyperinflation, 30-year bond yields topped 15%. Twenty-seven years later, during the crisis of 2008, the 30-year yield plummeted to an all-time low of 2.55%. Over this identical timeframe, one-year T-bill yields – which also move inversely to the Treasury debt's price – plummeted from a high of 14.93% to a low of 0.19%.

Now that is a bull market! 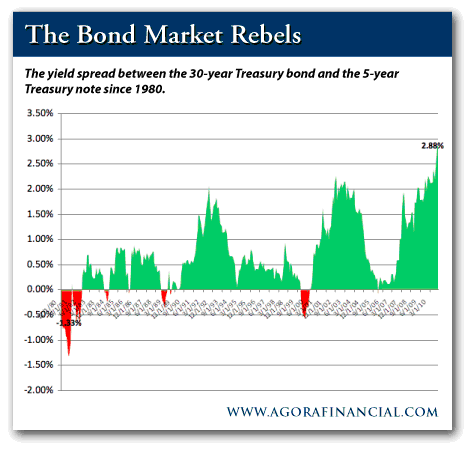 According to dusty, old economics textbooks, a rapidly steepening yield curve portends resurgent inflation. But according to the esteemed academic, Ben Bernanke, a steepening yield curve is a sign that his battle against deflation is "succeeding". We trust the textbooks more than the academic...especially because the academic insists on fighting an enemy that he, alone, can see.

Most of the educated world considers the threat of deflation to be as real as the threat of fire-breathing dragons. Nevertheless, Ben Bernanke, our well-intentioned knight, draws his shimmering QE2 from its sheath and strides into the T-bond market to vanquish his mythological enemy.

Ben's quest will certainly "succeed," but he will probably lop off the head of the bond market in the process.

Remember, "Prices are liars," as Passport Capital's investing ace, John Burbank, says. And in the Treasury bond market, the short end of the curve can lie much more easily than the long end, thanks to Bernanke's QE2 campaign.

Because Bernanke's bond-buying quest is focusing on the short end of the curve, he is distorting prices.

"The Federal Reserve's plan to buy $600 billion of US government debt will focus about 86 percent of its purchases in notes due in 2.5 years to 10 years," Bloomberg News relates, "leaving the so-called long bond as the security that most closely reflects expectations for inflation."

"We live in a time in which market distortions are higher than usual," our colleague Chris Mayer observes...

"This thought really hit me when I saw something that I probably never should have seen: For the first time ever, the rate on 30-year mortgages slipped below that of 30-year Treasury bonds. In effect, the market was saying that an individual looking to borrow against his home is a better credit risk than the US government."

This "market distortion," Chris explains, is the direct result of the Fed's meddling at the short end of the curve.

"The usual spread between 30-year mortgages and the 30-year Treasury bond has been around 1.3 percentage points in recent years," says Chris. "Therefore, assuming the Fed can't continue its manipulations forever, it's a good bet that mortgage rates will rise after QE2 wraps up."

Buy Gold at the lowest costs, and store it – for as little as $4 per month – in the very safest Swiss vaults using world No.1, BullionVault...