END_OF_DOCUMENT_TOKEN_TO_BE_REPLACED

Rosenberg and I just spoke on the phone. You might not know his story, but David Rosenberg is a Wall Street legend.

He is famous for being a bearish economist at the most bullish firm on Wall Street. When the housing market was in a roaring boom, Merrill Lynch was making billions. But Rosenberg, Merrill's chief economist, was warning about recession and a bear market in stocks. He said the housing and mortgage bubble would pop and a severe economic downturn would follow.

Last year, he quit Merrill Lynch. Many people thought Merrill fired him for not being bullish enough.

"That's nonsense," he told me. "My wife and three kids live in Toronto. I wanted to be with them. So I left New York."

Of course, Rosenberg's bearish views were spectacularly right, and Rosenberg is now one of the most popular economists in the media. You'll often find him giving an interview on CNBC or a quote to the Wall Street Journal.

It's the bond market. First, check out this chart of the yield on the 10-year Treasury note. It's collapsing... now at March 2009 levels. 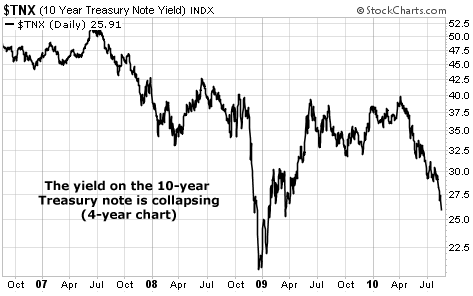 Some markets are smarter than others. Lumber is a great leading indicator of the housing market. The Baltic Dry Index often leads the shipping stocks. Rosenberg says the bond market is smarter than the stock market.

Rosenberg writes a great, free daily newsletter, Breakfast With Dave, where he summarizes and comments on all the major economic news of the day. In one of his issues last week, he showed that whenever the economy heads into a downturn, bond traders start anticipating the recession before the stock market.

And finally, the smoking gun for the 2010 recession...

In other words, if the action in the bond pits is any guide, the economy is going back into recession.

I asked Rosenberg what investors should do about this. He likes Gold Investment and the highest-quality natural resource companies. But bonds are his favorite investments. He says most people think cash is king. But they're wrong. In a deflationary recession, income is king. He calls his strategy "SIRP," which stands for Safety and Income at a Reasonable Price.

Start your Gold Investing with this free gram at BullionVault now...