END_OF_DOCUMENT_TOKEN_TO_BE_REPLACED

Why history could soon repeat itself...

CLEARLY THE US economy remains broken. This is the only plausible reason why bonds might not be a "sell." But then Bernanke keeps trying to fix the economy, which is the best reason why bonds are probably not a "buy", says Eric Fry at the Daily Reckoning.

But "all else" is almost never equal, especially not in the America of 2011. Today in America, most welfare recipients possess a better balance sheet than the US government; most teenagers display greater fiscal responsibility that a Congressman; most comic books contain more gravitas than the minutes of a Federal Open Market Committee meeting.

Yes, that's right, our national finances are a joke, perpetrated by a troupe of Ivy League educated jesters. As we noted in Tuesday's edition of The Daily Reckoning, the IRS could double its income tax receipts and the federal government would still operate in the red. And since our elected officials are unwilling to propose legitimate remedies (mostly because we voters would be unwilling to reelect them if they did), the job of fixing this mess falls to Ben Bernanke.

But he can't fix it. He's just a guy with an impressive résumé and stupid ideas. He can try to paper over trillion-Dollar deficits by printing Dollars and buying Treasury debt, but it won't work. And the more he tries to make it work, the less folks around the world desire to hold Dollars. That's a very dangerous game he's playing.

Back in the 1970s, a US "inflation problem" became a "Dollar problem" which became a "bond market problem." After a while, cause and effect became indistinguishable from one another.

Shortly after President Nixon severed the Dollar's last remaining connection to gold in 1971, inflation rates started edging higher. The annual CPI readings soared from 3.3% in 1971 to 9% in 1973 and 12% during the Arab oil embargo year of 1974.

In October of 1974, President Ford announced his infamous "Whip Inflation Now" campaign. In a speech before Congress, Ford declared inflation, "public enemy number one" and announced a series of measures to combat it.

But President Ford did not whip inflation…and neither did President Carter. Although inflation rates dipped back down toward the 6% range in 1976 and '77, they skyrocketed shortly thereafter. Dollar-holders and T-bond holders both suffered mightily.

Less than a month after President Carter's inauguration, the US Treasury issued its first 30-year bond – the 7 5/8s of 2007. Over the next four years this bond lost nearly half its value, as inflation and bond yields both soared toward 15%.

President Carter responded to this dire situation by issuing T-bonds denominated in Deutschemarks and Swiss francs. In 1978, these so-called Carter Bonds came to market, with the hope of attracting investors who would not buy the Treasury's Dollar-denominated bonds. The buyers of these unique bonds fared pretty well; the buyers of traditional Treasury bonds, not so much.

From 1978 to 1981 inflation continued soaring, which meant that the Dollar and the bond market continued tumbling. The bond market shellacking of the late 1970s was swift and severe, as the chart below illustrates. 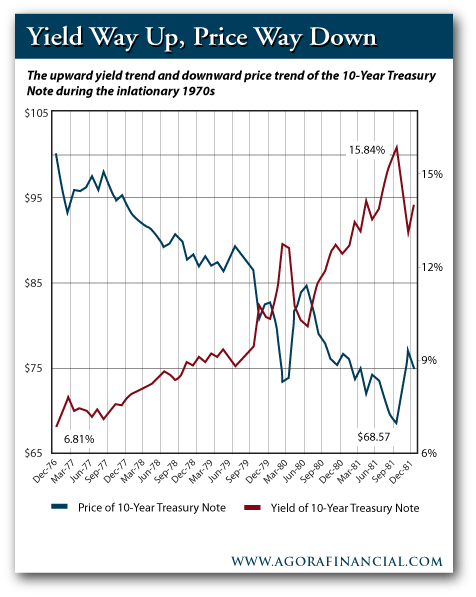 Could history repeat itself? Absolutely.

Could it happen soon? Why not?

Cautious investors may wish to move to the sidelines and watch the spectacle from a safe distance. Aggressive investors and/or speculators may wish to dive into the fray and place bets against the bond market.

The bond market selloff of early 2009 provides a glimpse of the profit potential. With the benefit of flawless hindsight, an investor could have sold short "TLT," the iShares Barclays 20+ Year Treasury Bond ETF on December 30, 2008 and closed out the position six months later for a hefty 27% gain. That's a big winner in "Bond Land." 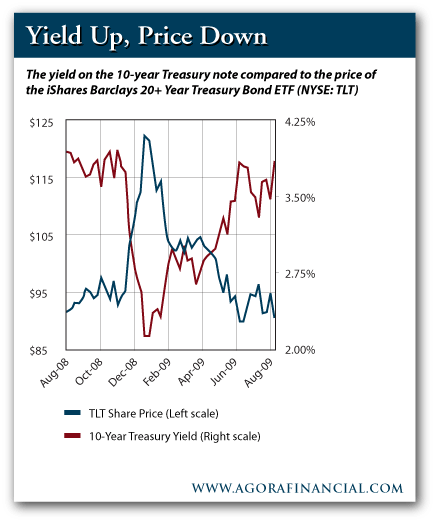 If, as we suspect, a large-scale bond bear market is likely to begin soon, investors will not require flawless hindsight to place a profitable bet on the short side… just a little foresight…and an appetite for betting against Ben Bernanke.

But remember, short selling is very risky. The potential for loss is infinite.

Looking to short the US by making a Gold Investment? With BullionVault you get direct access to the spread – so you can quote your own prices – plus you can trade around the clock, meaning you can sell your gold for cash any time of the day or night...