END_OF_DOCUMENT_TOKEN_TO_BE_REPLACED

With enough hubris and ego, central banking is simple...

The FEDERAL RESERVE states that its goal is to promote employment and economic growth while regulating inflation, writes Gary Tanashian in his Notes from the Rabbit Hole.

That makes it sound as simple as pulling levers, tweaking a few knobs, and dialing up just the right amount of inflation per unit of economic growth.

The hubris and ego involved here is incredible.

For the last several years global macro dynamics had allowed the Fed to operate in a highly inflationary manner, while inflation's effects discretely festered in areas of the 'services' economy (like healthcare, regulatory entities, real estate, leisure and hospitality and certain food items). It became clear to me that despite commodities driving down the raw costs of doing business, inflation's effects had embedded in the services economy when my trash hauler informed of a rate increase due to regulations in the services chain, despite the crash in fuel costs.

That is just one little example. Larger examples infect the entire economy. According to Bloomberg the bond market is not buying the Fed's rate-hike stance.

I think bond traders are right to lose confidence in the Fed but the theme of this article implies they are losing confidence for the opposite reason than might actually be the right one once this deflationary phase has run its course; that would be a highly technical economic condition we call "Chickens coming home to roost".

The notion of bad deeds, specifically curses, coming back to haunt their originator is long established in the English language and was expressed in print as early as 1390, when Geoffrey Chaucer used it in The Parson's Tale:

Roosting chickens would not make me sad, because a shining light on truth makes me glad, even if that truth is inconvenient or painful. The truth is always the truth.

The truth is that the Fed has used dangerous policy tools for years now and in my opinion, laid the groundwork and set the template for other global policy policy makers to an extent only exceeded by the Bank of Japan.

"If history is any guide, the Fed will lower its rate forecasts at next month's meeting. The move won't be enough for traders, whose pessimism toward the economy contrasts with the Fed's view that risks to growth and inflation are transitory."

I think it is possible that these traders, so willing to buy the "Great Rotation" (out of bonds and into stocks, which would drive yields up) promotion hyped by financial media 2+ years ago are getting overly hysterical about the economy now. The US economy is sagging, but not really decelerating yet. I think there is an element of fear about what the stock market has been doing and that is painting these traders' outlooks to some degree.

The Fed, like a guilty little boy who raided his mom's cookie jar, knows what it did. The Fed is turning its knobs, pulling its levers and hoping that confidence once again carries the day and market players stay in line and do as they should do. In other words, the Fed is being preemptive against the inflation that it knows it has promoted. Roosting chickens do not make the Fed glad. Just ask Alan Greenspan.

"The Fed grudgingly has been following the market lower, and that will continue in March," said Joseph LaVorgna, chief US economist in New York at Deutsche Bank, one of the Fed's 22 primary dealers. "Ultimately, the market will be right. The Fed is losing credibility on inflation."

Again, the Bloomberg article is talking as if there is no inflation and that these bond traders are right and deflation will persist until we all die a proper Keynesian death.

How often has the market been right? When everyone was hysterical about oil and copper driving inflation up? When Bond King Bill Gross shorted the long bond? When the "Great Promotion" was being inflicted upon naive investors? When exactly, have bond traders as a group, been right?

The article then goes on about the Fed's stupid dot plot, which people should have tuned out long ago. It then concludes with Hawk-in-drag James Bullard...

"St. Louis Fed President James Bullard said last week that a January increase in core prices showed policy makers' forecast for quicker inflation was on track. He was referring to the 2.2 percent annual gain in the consumer-price measure that excludes food and energy costs."

Bullard is in my opinion right to remain on the inflation theme despite market signals not yet reflecting a need for it. 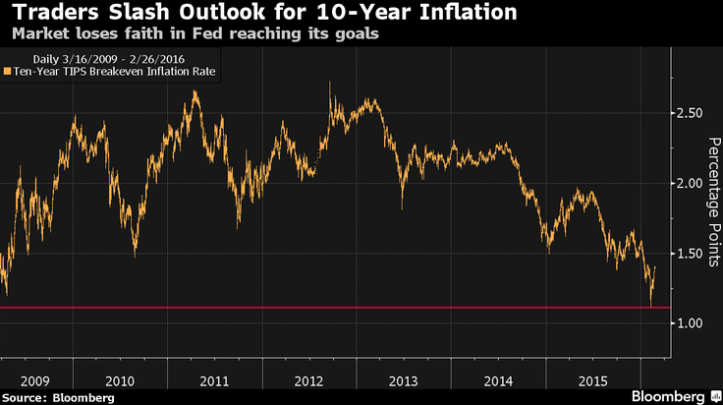 We have been on the deflationary theme for a long while now and indeed until the market signals (like the TIPS b/e rate, silver vs. gold, etc.) show otherwise we should respect the deflation case. But folks, the inflation is there and it should shake out in due time. These hand wringing traders will eventually be wrong again.

The best that can be hoped for is that growth will pick back up again, but that it will inflationary growth, as in 2003-2007. The worst is that the economy will continue to sag and inflation's signals pick up anyway. That would be Stagflation. This is the situation that the magical policy of the Bernanke Fed has created and its chickens will roost sooner or later, just like Greenspan Fed's nesting fowl.

When reading articles like the above – and a million others – in the mainstream media, I shake my head in wonder about how so many people can continue along on such a conventional thought path when the market's underpinnings have been so unconventional for so long. The real bond vigilantes died in the 1990s.