END_OF_DOCUMENT_TOKEN_TO_BE_REPLACED

So say all these fund managers, traders, pundits and analysts...

The BOND "super bubble" is coming to an end, reckons Justin Spittler, writing at Casey Research for Doug Casey.

For the last three decades, US bond prices have been in a steady uptrend. This epic bond bull market survived three recessions, the dot-com crash, and the 2008-2009 financial crisis.

Because of this, bonds have become very popular with investors. You can see why in the chart below, which shows the Dow Jones Equal Weight US Corporate Bond Index since 1997. This index tracks the performance of US corporate bonds. 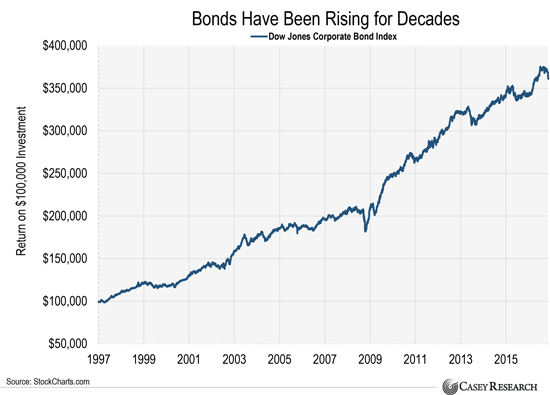 Many investors have gotten used to making safe and steady returns in bonds.

Over the last few months, bond yields have skyrocketed...amd a bond's yield rises when its price falls.

The same thing is happening overseas. Yields on French, Italian, and British government bonds have all hit multi-month highs over the last few days.

This is a huge deal. Just four months ago, MarketWatch reported that global interest rates reached the lowest level in 5,000 years.

Still, you might not be worried about this if you don't own any bonds. But you must understand that the bond market is a cornerstone of the global financial system. If it unwinds, it's going to impact everything from stocks to the economy at large. We'll explain what could happen in a minute.

But first, let's look at what some of the world's smartest investors have to say about this.

Dalio explains why he thinks the bond market's topped out:

In the investing world, secular means long-term. In other words, Dalio's saying bond yields and inflation rates have bottomed.

Now, we know higher bond yields are bad for bond prices. But rising inflation is also bad for bonds.

High inflation is obviously bad for the average person. It means the money in their wallet doesn't go as far. It's also bad for people who own bonds. That's because inflation eats away at a bond's future payments.

If Dalio's call sounds familiar, it's because we've been saying the same thing for weeks...

This is clearly bad news for bonds. Unfortunately, many people are still on the wrong side of this trade. Dalio wrote yesterday:

"When reversals of major moves (like a 30-year bull market) happen, there are many market participants who have skewed their positions (often not knowingly) to be stung and shaken out of them by the move, making the move self-reinforcing until they are shaken out."

Jeffrey Gundlach also thinks the 30-year bull market in bonds is over.

Like Dalio, Gundlach is a world-class investor. He runs DoubleLine Capital, an investment firm that oversees more than $100 billion. He's also one of the world's leading bond investors.

He's known on Wall Street as the "Bond King".

According to Barron's, Gundlach turned bearish on bonds months ago:

"Gundlach says he turned 'maximum negative' on bonds on July 6, two days before the 10-year Treasury yield hit a multidecade closing low of 1.366%. He predicted shortly thereafter that the 10-year yield would top 2% by year end."

Gundlach's prediction was spot-on. Remember, the US 10-year currently yields 2.23%.

Since the election, Gundlach's become even more bearish. Barron's reported over the weekend:

"Trump's pro-business agenda is inherently 'unfriendly' to bonds, Gundlach says, as it could to lead to stronger economic growth and renewed inflation. Gundlach expects President-elect Trump to 'amp up the deficit' to pay for infrastructure projects and other programs. That could produce an inflation rate of 3% and nominal growth of 4% to 6% in gross domestic product. 'If nominal GDP pushes toward 4%, 5%, or even 6%, there is no way you are going to get bond yields to stay below 2%,' he says."

In a way, this is good news. After all, what American wouldn't want the economy to grow faster?

Unfortunately, Trump's pro-growth policies could come at a steep price.

For one, inflation could take off. We could also see more deficit spending, more debt, and more currency debasement.

Plus, problems in the bond market could spill over into other assets, like stocks. Dalio wrote yesterday:

The question will be when will this move short-circuit itself – i.e., when will the rise in nominal (and, more importantly, real) bond yields and risk premiums start hurting other asset prices.

Gundlach is also worried about the side effects of rising yields. Barron's reported:

"[T]he structure of the US economy and the pricing of the stock market are predicated on 1.5% Treasury yields and zero short-term interest rates. Rising rates would hurt the US housing market and possibly dent corporate stock-buyback programs. Buybacks helped boost share prices in recent years and were funded, in many cases, with borrowed money."

A buyback is when a company buys its own shares off the marketplace.

Since the financial crisis, Corporate America has borrowed enormous sums of money to pay for buybacks. As we've explained many times, buybacks are a big reason stocks have kept rising even though earnings have been falling.

If rates keep rising, it will become much more expensive for companies to borrow money...and that could kill the buyback craze. In short, the stock market could lose one of its biggest sources of demand.

To be clear, we aren't saying higher rates will kill the buyback craze overnight.

But it's something we're going to keep a very close eye on. It's also something to think about before diving headfirst back into stocks.