END_OF_DOCUMENT_TOKEN_TO_BE_REPLACED

Fed the DotComs bubble, housing, and now this...

JOHN BOGLE must be dancing in Heaven, writes Dan Denning in The Diary of a Rogue Economist.

He's credited with creating the first index fund back in 1976.

And why not? At 124 months, this is the longest economic expansion on record in America. And the S&P 500 is up around 20% year to date.

Why would an American investor pay an active manager high fees to try and beat the market...when he could just pay an index-tracking fund low (or no) fees and get a great return?

It's all very logical in a bull market. Buy stocks for the long-run!

But it's dangerous at a time like now, when both Bill and I believe this bull market in stocks is on its last legs.

Which is why in this essay, we're going to look at two important questions: Is anyone trying to analyze the value of a business anymore? And if not, why should you care?

Remember Michael Burry? He made a mint from the housing crash (as featured in the film, The Big Short, based on Michael Lewis' book of the same name).

"Like most bubbles, the longer it goes on, the worse the crash will be [...] The theater keeps getting more crowded, but the exit door is the same as it always was. All this gets worse as you get into even less liquid equity and bond markets globally [...] It will be ugly."

It was nice to finally see some confirmation of a position I took last year.

If you read The Bonner-Denning Letter, you may remember what I'm talking about. Namely, that passive investing is creating thoughtless buying in the market based on the stupid idea that stocks only ever go up.

It's a pure liquidity argument (the market will rise because of large and regular flows of cash). And if we've learned anything in the last 20 years (or 20 days, for that matter), it's that liquidity can disappear in a hurry.

Of course, not everyone agrees with Burry.

Some argue that even an index fund is actively managed – in the sense that some human being or committee decides what goes in the index. Each and every index that's tracked by a passive fund is constructed based on valuation (or other) decisions made by a real person.

There's no such thing as passive, in other words. But I think this argument misses the larger point, which is that index investing is the enemy of price discovery in the market.

Price discovery happens at the level of the individual security. At some point, an analyst has to look at a real business, its real costs, its real debts, and its real cash flows, and decide the present value of future cash flows.

That analyst has to value the business and, based on that valuation, pick a price at which the business is worth buying. That kind of work can only be done by Graham and Dodd-style securities analysis. That is, one business and one investment at a time.

In short, the more investors abandon securities analysis for index investing, the more price discovery in the market disappears.

Index levels rise because passive money pours in. No one is trying to figure out what stocks are worth. This is why record-high valuation numbers in the market are ignored. Valuations don't matter! Only momentum, growth, and liquidity matter. Follow the money, baby!

Obviously, Bill, Tom Dyson (who contributes regularly to The Bonner-Denning Letter), and I think valuations DO matter. This is why, in the Letter, we have an asset allocation strategy that's heavy in cash and tangibles and lighter on stocks and bonds.

It's also why Tom believes a mean-reverting bear market in valuations will punish the Dow and reward gold. (You may remember his argument on the subject in September.)

Some $30 trillion in household net worth could be wiped out in the next bear market and recession. At least half of that could come from losses in the stock and bond markets.

The chart below shows the last three bubbles created by the Federal Reserve. First, the tech, media, and telecom (TMT) bubble of 2000. Then the housing bubble. And now, finally, this "passive" and "everything" bubble. 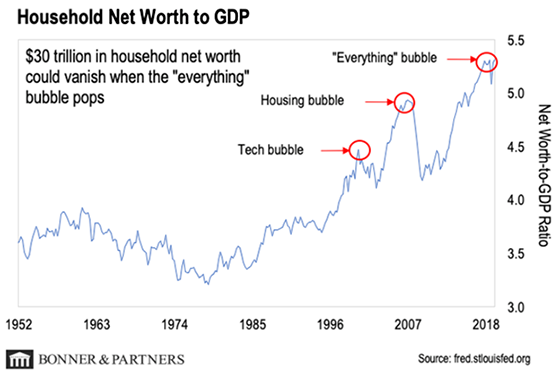 Embedded in all three bubbles is a record bond bull market. I'll spare you the details today, but if you're a paid-up Bonner-Denning Letter reader, you'll find the full story in our August issue.

What's important to know is this: A record bull market in bonds began in the early 1980s. And it ended, I believe, this summer. While Treasury yields could go lower from here (and even, conceivably, negative), there simply isn't a lot of upside left in bond prices. There's much more risk than return.

Former Federal Reserve chairman Alan Greenspan and former US representative Ron Paul may be right when they say US interest rates are heading into negative territory. If they are, there is one last blow-off move in bonds for traders to capture.

But that's for traders. For investors, the blow-off move in bonds is nothing less than the endgame of our debt bubble. THAT bubble is global. And it's been inflating wildly since the end of the last financial crisis in 2008.

But that crisis never really ended. It just infiltrated into everything, corrupting and contaminating the whole system. A system that is now showing ominous signs of cracking.