END_OF_DOCUMENT_TOKEN_TO_BE_REPLACED

Regulators too, all too sadly...

ONE of the greatest failings in traditional (that is to say, Keynesian and especially now neoKeynesian) economics is that it spectacularly fails to take into account the significance of human psychology, writes Tim Price on his ThePriceOfEverything blog.

The author Guy Fraser-Sampson, in The Pillars of Finance, points out that before the Second World War, financial thinkers had a somewhat humbler perspective on the subject, for example, of risk:

"While before the War there was eager discussion as to what risk might be, and whether it was the same thing as uncertainty, there was total agreement that whatever it was it was probably too complex an animal ever to be fully understood and, in particular, that it was incapable of mathematical calculation."

The American academic Frank Knight published Risk, Uncertainty and Profit in 1921. As he wrote, some forms of uncertainty are measurable. There is, for example, empirical observation with regard to the occurrence of a number of discrete outcomes, such as the rolling of dice.

Then there is 'true uncertainty', such as the chances of a house in a particular area catching fire in any given year. The probability of dice throws is capable of mathematical calculation - albeit the outcome is still not guaranteed – whereas the chance of a house burning down is not. In relation to fire insurance, we can only use statistical inferences drawn from prior observation.

"The import of this distinction. is that the first.. type of probability is practically never met with in business, while the second is extremely common. It is difficult to think of a business 'hazard' with regard to which it is any degree possible to calculate in advance the proportion of distribution among the different possible outcomes. This must be dealt with, if at all, by tabulating the results of experience. The 'if at all' is an important reservation."

Ludwig von Mises published Human Action in 1949 and The ultimate foundation of economic science in 1962. That adjective 'human' says a lot. As Mises would point out, human values are variable, subjective, often indefinable. Since market outcomes are the result of human decision-making based on these values, past outcomes cannot predict the future.

"You can only employ the techniques of the natural sciences such as physics if you can use things like empirical observation extrapolated from scientific experiments, and apply mathematical techniques to analyse the data. Yet financial data is the result not of physical phenomena but of human action, which is in turn caused by human decision making, which is sequentially prompted largely by emotion.

"So finance is behavioural, not physical. It is at best a social science studying human behaviour, like psychology or sociology, and can never be a physical science.. It is for this reason that neither observation nor mathematical techniques can ever offer any valid universal guide to future outcomes."

One of the 'bibles' of behavioural finance – a school of the subject which readily accepts that most economists suffer unwittingly from physics envy and attempts to remedy that by acknowledging that human beings are irrational creatures – is James Montier's Behavioural Investing.

For those looking for a shorthand version, consider Aberdeen Standard's Behavioural Finance Toolkit, just published by their Senior Investment Manager, Joe Wiggins. One extract alone is worth at least a thousand words, and probably a thousand Dollars to boot. Their cautionary investment acronym MIRRORS is shown below. (Source: Aberdeen Standard Investments – A Behavioural Finance Toolkit) 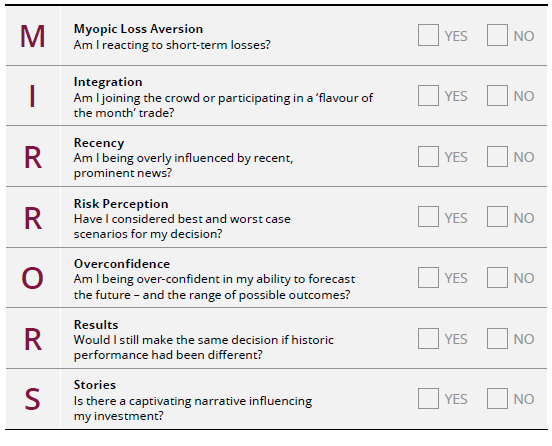 In the time-honoured manner of things, some of these problems are reinforced by the financial egulator, and almost all of them are exacerbated by the mainstream media.

Are you reacting – or being encouraged to react – to short-term losses ? Well, as Financial Adviser's Nic Spicer points out, MIFID II's '10% rule', for example,

"...requires that investment firms, providing the service of portfolio management, inform clients by the end of the business day if the value of their portfolio depreciates by more than 10% from the beginning of the last reporting period – reporting periods must be at least quarterly. It also requires disclosure at each subsequent fall f a multiple of 10%.

"So, what is the issue with keeping clients better informed? Surely more information is always better? In theory, yes. Also in theory, clients are not subject to greed or fear and always behave perfectly rationally. In practice though, the rich field of behavioural finance demonstrates that we (and that includes all of us: clients, investment managers and advisers) are all too human and are definitely subject to both fear and greed.

"And there is a worrying possibility that clients, who generally have less day-to-day experience with markets, will be 'nudged' into selling out of their portfolios by a notification of their savings having fallen by what they will likely feel is a significant amount."

How unusual it would be if financial regulation had an opposite effect to that originally intended.

Not that the mainstream media ('MSM') are entirely blameless. The MSM tend to treat the cautionary MIRRORS checklist as some kind of aspirational bingo card in their coverage of financial markets:

For those who have yet to read it, we recommend Rolf Dobelli's excellent essay: Avoid News.

This is not to denigrate the small number of accomplished financial columnists out there. But perhaps it makes sense to consume your news in the same way disciplined active managers approach the market: by being highly selective.