END_OF_DOCUMENT_TOKEN_TO_BE_REPLACED

You know what to do. Right?
CRACK! That was the sound of the gold price breaking down through support last Friday, writes Greg Canavan in The Daily Reckoning Australia.
Dropping below the low of November 2014, the move represents the lowest gold price since 2010.
US gold mining equities have also taken a beating. High debt levels accumulated during the boom are now weighing on stocks as the US Dollar gold price falls towards the cost of production.
Now every man and his bear is calling for gold to hit $1,000 an ounce. And it could well do so. Technically, that is where the next major 'support' level sits, and traders looking to make money on the downside will do their best to get it there.
So what was behind the crack lower?
Well, ongoing speculation of an imminent rate rise in the US didn't help gold's cause. And an announcement by China that it has increased its gold reserves by much less than expected weighed on sentiment too.
These are not really major issues. But they were enough to see gold lose support, which brought about more selling.
On the topic of China's gold reserves, the 'lower than expected' number didn't really surprise seasoned observers, like our man Jim Rickards, editor of Strategic Intelligence.
Back in May this year, Jim penned an essay that discussed the very topic of China and its gold reserves. He said that China wants to join 'the club' and to do so it must play by the rules.

"The rules of the game say you need a lot of gold to play, but you don't recognize the gold or discuss it publicly. Above all, you do not treat gold as money, even though gold has always been money.
"The members of the club keep their gold handy just in case, but otherwise, they publicly disparage it and pretend it has no role in the international monetary system. China will be expected to do the same. It's important to note that China will not act in the best interests of gold investors; it will act in the best interests of China...
"Meanwhile, China will probably announce its increased gold holdings later this year. But don't expect fireworks. China has three accounts where they keep gold – the People's Bank of China, PBOC; the State Administration of Foreign Exchange, SAFE; and the China Investment Corp., CIC.
"China can move enough gold to PBOC when they are ready and report that to the IMF for purposes of allowing the Yuan in the SDR. Meanwhile, they can still hide gold in SAFE and CIC until they need it in the future."

Jim didn't expect fireworks with this announcement and he was right. Jim is way out in front of most gold analysts. His intelligence sources are second to none.
It's ironic that China's underwhelming gold announcement may be the catalyst to send gold to its capitulation low. But the market works in mysterious ways.
I say capitulation low because that is what it's shaping up to be. Let me tell you why. In the future markets, traders in the 'managed money' category (basically the hedge funds) now hold a record amount of short gold contracts. Being 'short' means they are betting on a price fall.
You can see this in the chart below: 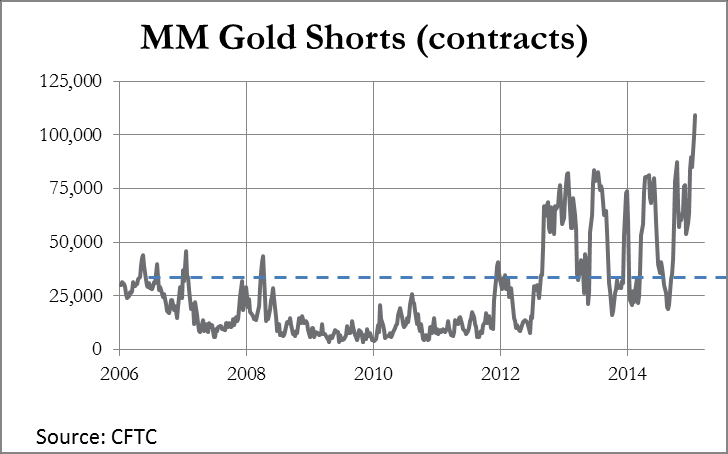 This is the largest [gross] short position by this group of traders in the report's history. [ Ed. note: Other managed money traders hold bullish bets. Net-net, the group was still bullish overall in gold futures, and in both futures and options combined, at last week's count.] And chances are it's going to get more extreme as downward momentum gathers pace.
That means you could see more downside in the US Dollar gold price. But such a drop just adds fuel to the fire of an eventual rebound. Consider the following commentary from trading legend Martin Armstrong:

"At the top, the majority is long and they become the fuel to make any market crash and burn.
"At the bottom, the opposite unfolds for everyone will be short. They will pile on looking for $600 gold and will count their profits upon entering the trade. They become the fuel to send the market higher for it always begins with a short-cover rally; people continually try to sell each rally, looking for that new low, just as the people at the top remain convinced that a decline would follow with new highs."

So as this US Dollar gold bear market reaches its crescendo, and as the mainstream media puts the boot in about gold's prospects, keep in mind we're close to the bottom with an all-time record amount of punters betting on more falls.
Also keep in mind that I'm strictly talking about the US Dollar price of gold here. As I've pointed out on a number of occasions, the gold price denominated in Aussie Dollars is in an emerging bull market. Currently trading around A$1535 an ounce, gold is up nearly 20% from its 2013 lows.
That's thanks to a falling Aussie Dollar, and the fact that it's falling faster against the US Dollar than what gold is.
It's true that you want to see gold rising in US Dollar terms before getting too excited about gold's longer term prospects, but as I showed you we're not too far away from that point.
So don't ignore the gold market. We're nearing the point of maximum pessimism. History tells you that is always a good time to get involved.

Greg Canavan is editorial director of Fat Tail Investment Research and has been a regular guest on CNBC, ABC and BoardRoomRadio, as well as a contributor to publications as diverse as LewRockwell.com and the Sydney Morning Herald.