END_OF_DOCUMENT_TOKEN_TO_BE_REPLACED

Catching up with JPM's LCR and NSFR...
The LIQUIDITY Coverage Ratio and Net Stable Funding Requirements are the primary framework that banks adopted as part of Basel III, beginning in 2010 and fully phased in during 2019, says Nathan Lewis at New World Economics.
This requires banks to hold a large portion of their assets in the form of Federal Reserve deposits (bank reserves, a form of base money).
Basically, you can look at this as the bankers' equivalent of a vault full of $20 bills. If someone comes asking for their money, they have plenty of cash on hand to make payouts.
Today, Domestic banks like J.P.Morgan Chase have about 14% of total assets in the form of Fed bank reserves. This mirrors past banking practice, when it was common to hold 10%-12% of assets in the form of "cash." Today, this "cash" is almost 100% Fed deposits (bank reserves), although in the past it was mostly overnight lending.
Here is how it looked on J.P.Morgan's 10Q from 3Q21: 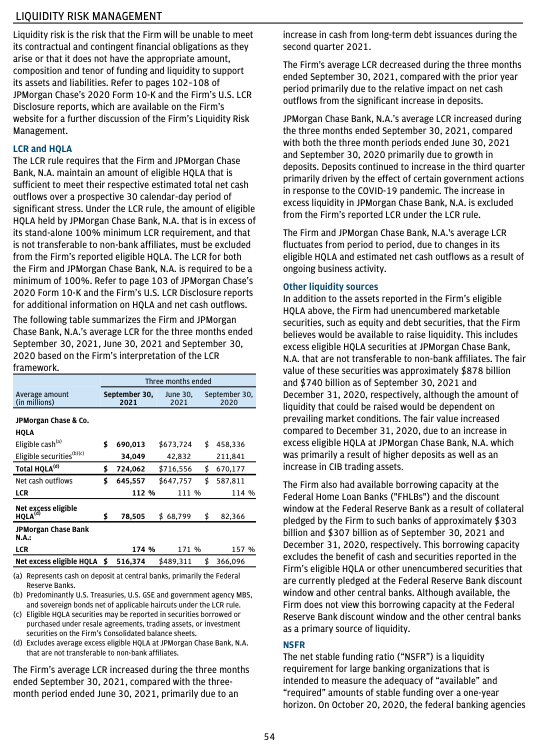 We see that the LCR was around 112%, which is basically the minimum since you need a little cushion above the required 100%.
It's worth noting, however, that this "HQLA" consisted of $690B "cash," defined in the footnote as Central Bank deposits, out of $724B total as of September 30, 2021.
In other words, the HQLA-eligible assets were 95% CB deposits. The remainder was "eligible securities," which is mostly or entirely government bonds I would imagine. A year earlier, in September 30, 2020, "cash" was 68% of HQLA. So, banks have moved more toward "cash," in the process absorbing more base money from the Fed. But, obviously, this is about done since they are already at 95%.
Since Fed deposits and T-Bills are paying about the same interest, Fed deposits are naturally more attractive, since they don't have liquidity issues. If you had a situation (like 2008) where banks were grasping for liquidity together, they would all be trying to sell bonds together. This might push down the price of bonds, and the banks would take a loss on their sale.
J.P.Morgan also has "excess eligible HQLA" of $516B, which is basically government bonds.
In theory, there isn't anything preventing banks from holding Fed deposits in excess of their LCR requirements. But, I think that in practice there are some regulatory disadvantages to that.
This has some interesting implications for Federal Reserve policy going forward.
In the past, before the new framework defined by Basel III, banks did not hold much deposits at the Federal Reserve. For their short-term needs, they had overnight lending with other banks. This is basically equivalent to a checking account. If you have a checking account, then you don't need to keep a lot of banknotes ($20 bills) at home. If you need to pay for something, you can just use your checking account. In the 2008 crisis, banks basically suspended each others' checking accounts. So, they were left with just the "banknotes in their wallet." This was rather terrifying, so they established the Basel III protocols to make sure that they all had plenty of cash in their wallet.

As Basel III was phased in after 2010, interbank lending ("checking accounts") were phased out, and went nearly to zero. This graph above shows interbank lending as a percentage of total assets. It was about 5% for many years, and is now negligible. The data set was actually discontinued.
This is important, because the interbank lending rate, for example the London Inter Bank Overnight Rate (LIBOR), was for many years the benchmark of Federal Reserve interest rate policy. In the US, it was the Fed Funds Rate – the rate at which banks lent each other money. (The "interest rate paid on checking account balances.") But, if they are no longer lending each other money (they have "closed their checking accounts") then there is not really a Fed Funds Rate any more. It doesn't exist, or is based on so little liquidity as to be rather unreliable.
But, there was pressure on the Fed around 2015 to "normalize" its policy. For most people, this meant "raising the interest rate." But, the old Fed Funds Rate target, which was not actually formalized until the mid-1990s, basically no longer existed post-Basel III. So, the Fed adopted "Interest Paid on Reserve Balances." Instead of the Fed Funds Rate (interest paid on a checking account with another bank), it was, more or less, the "interest paid on a checking account at the Fed." Previous to 2008, this had always been 0%.

So, IORB went up and down. It is now 0.15%, which is not exactly zero, but you could get rid of it entirely without much disruption.
And, that might be a nice thing to do. For one thing, it would allow short-term interest rates to be set by market forces, rather than the Federal Reserve.
It appears that the market's short-term interest rate at this point is basically 0%, which is rather strange but that was also true during the Great Depression period – a time when the USD was formally devalued in 1933, and inflation from that event continued to flush through for the remainder of the decade. Raising the IORB introduces a somewhat artificial increase in interest rates, arguably a distortion of the market which seems happy at 0% for TBills.
The market can certainly decide for itself what price it wants to pay for 91-day Treasury paper. (This price can nevertheless be pushed around by the Fed and other Fed-friendly entities like big banks.) Basically, it would mean "no more rate hikes" from the Federal Reserve, which would probably make Wall Street and many others happy.
This would be a nice thing from our perspective too, because it would represent the abandonment of Keynesian-style interest rate targeting. The desire to engage in Keynesian-style interest rate targeting, as a means of macroeconomic manipulation, has been, since Bretton Woods, the primary obstacle or interference with the adoption of a Stable Value system such as a Gold Standard System.
The proper management of any Stable Value system, like a currency board today, naturally excludes any interest-rate manipulation of this sort. You could still "manipulate" interest rates by buying and selling securities, without any effects on the monetary base. You could also have various "liquidity" provisions, which have the effect of reducing high interest rates, similar to the "lender of last resort" functions of the Bank of England in the pre-1914 era. This was the original mandate for the Federal Reserve in 1913.
These are compatible with maintaining the value of the currency at some Stable Value target, such as a gold standard.
But, if you are no longer using interest rates as a guide to the money creation process, what then do you do? For several years, the Fed has been more-or-less making it up as they go along, but the basic framework, as we all know, has been a process of "quantitative easing," today tempered by the Reverse Repo function, and also in the past tempered by the Treasury balances.
In other words, it is a quantitative process, not an interest-rate-driven process. It is a sort of crude, seat-of-the-pants Monetarism, one that has been driven, I would say, with a vague Stable Value mandate.
The Fed, and other central banks, never talk about the value of their currencies, vs. gold or vs. other currencies, in the foreign exchange market. But, this is a primary driver of policy. If the Euro fell out of bed and collapsed to $0.50 USD, you better bet there would be a lot of discussion about this, and immediate response by the ECB. If the Euro soared to $2.00, you would have the same thing. A similar thing holds, I think, with the USD or Euro vs. gold.
So, in this seat-of-the-pants context, the Fed and other central banks are basically adjusting their monetary bases to maintain stable currency value, or at least, avoid anything obviously bad. In 2021, the Fed fired up its Reverse Repo function, sucking up a huge amount of money out of the economy, because it realized at some point that its present policy, to continue to expand the monetary base through the ongoing QE and also Treasury drawdown, was putting the value of the USD at significant risk. It was seat-of-the-pants, and it was in response (I think) to the potential for major changes in currency value.
Thus, you could say that we are moving toward a more formalized Stable Currency regime, where there is a definite Value target (gold, for example), and the means of achieving this value target is adjustments in the monetary base, NOT changes in interest rate policy or something of that sort.
In other words, it is the model that I laid out in detail in Gold: The Monetary Polaris (which you can get for free in .pdf format), and which is already in use in currency board-type systems worldwide. It is also the means by which historical gold standard systems pre-1914 were maintained.