END_OF_DOCUMENT_TOKEN_TO_BE_REPLACED

...the S&P is failing to follow fast enough. Is inflation set to return...?

SO AS I was charting long-term Treasury bond yields, I ran a chart of the ratio between the stock of US banks and the S&P 500 index, writes Gary Tanashian in his Notes from the Rabbit Hole.

And what do you know? The ratio had broken out to the upside right along with long-term interest rates. 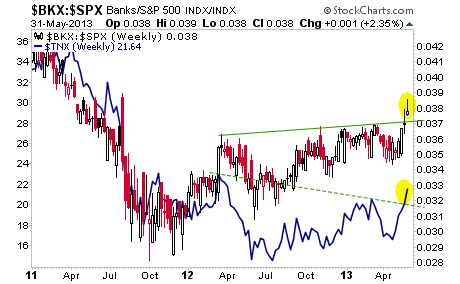 The Bank Index ratio to the S&P 500 (BKX-SPX) is breaking out to the upside in defiance of a bear case in stocks. The BKX has modestly led the SPX since 2011. We have noted that this is a necessary bullish factor for the financialized economy, which is quite different from a real or organic economy.

Remember the 'carry trade' of the Greenspan era? That would be the same carry trade that helped bloat the banking sector, putting its big, fat too big to fail hands in just about every cookie jar in America.

The banks love rising long-term yields because they basically receive free money from the Federal Reserve as the first users of newly created funds on the short end, which is being held down by ZIRP. They then roll these funds into loan products, mark them up per long-term yields and voila, instant profits courtesy of a 'borrow short, lend long' gimmick.

Let's see how this develops, but we should note that Bernanke has not created anything new under the sun. The great carry trade of last decade was just another unnatural systemic stress that led to the 2008 resolution.

Do you suppose that Fed officials are ready to let the banks do the heavy lifting, now with the incentive (carry) to get the funds 'out there' to the public? This condition came hand in hand with an inflation problem last decade and now that everybody seems to know there is no inflation, would not a new phase of rising inflation expectations go well right about now?"

Bottom line? Talk of QE tapering may not only not mean the end of any prospects for inflation, but may actually be part of the kick-off to a new phase of increasing inflation expectations as the banks may now have incentive to get the newly printed money 'out there'.

The banks have been liquefied through ZIRP and the prospect of a profitable 'carry trade' dynamic becoming engaged going forward should be factored into investors' outlooks across a broad spectrum of assets and markets.

With precious metals and commodities so far down in the dumps and a certain NYU rock star economics professor out front talking down gold and talking up a dis-inflationary backdrop, might we not at least consider the contrarian possibilities of an inflationary phase to come?