END_OF_DOCUMENT_TOKEN_TO_BE_REPLACED

The US just approved the Basel 3 banking accord. So what...?
On TUESDAY July 2, writes noted Austrian economist Dr.Frank Shostak at the Cobden Centre, US central bank policy makers voted in favour of the US version of the global bank rules known as the Basel 3 accord.
The cornerstone of the new rules is a requirement that banks maintain high quality capital, such as stock or retained earnings, equal to 7% of their loans and assets.
The bigger banks may be required to hold more than 9%. The Fed was also drafting new rules to limit how much banks can borrow to fund their business known as the leverage ratio.
We suggest that the introduction of new regulations by the Fed cannot make the current monetary system stable and prevent financial upheavals.
The main factor of instability in the modern banking system is the present paper standard which is supported by the existence of the central bank and fractional reserve lending.
Now, in a true free market economy without the existence of the central bank, banks will have difficulties practicing fractional reserve banking. Any attempt to do so will lead to bankruptcies, which will restrain any bank from attempting to lend out of "thin air".
Fractional reserve banking can, however, be supported by the central bank. Note that through ongoing monetary management, i.e., monetary pumping, the central bank makes sure that all the banks can engage jointly in the expansion of credit out of "thin air" via the practice of fractional reserve banking.
The joint expansion in turn guarantees that checks presented for redemption by banks to each other are netted out, because the redemption of each will cancel the other redemption out.
By means of monetary injections, the central bank makes sure that the banking system is "liquid enough" so that banks will not bankrupt each other.
The consequences of the monetary management of the Fed as a rule are manifested in terms of boom-bust cycles. As times goes by this type of management runs the risk of severely weakening the wealth generation process and runs the risk of severely curtailing so called real economic growth.
We maintain that as long as the present monetary system stays intact it is not possible to prevent a financial crisis similar to the one we had in 2007-9. The introduction of new tighter capital requirements by banks cannot make them more solvent in the present monetary system.
Meanwhile, banks have decided to restrain their activity irrespective of the Fed's new rules. Note that they are sitting on close to $2 trillion in excess cash reserves. The yearly rate of growth of banks inflationary lending has fallen to 4.1% in June from 4.2% in May and 22.4% in June last year.
Once the economy enters a new economic bust banks are likely to run the risk of experiencing a new financial crisis, the reason being that so called current good quality loans could turn out to be bad assets once the bust unfolds.
A visible decline in the yearly rate of growth of banks inflationary lending is exerting a further downward pressure on the growth momentum of our monetary measure AMS. Year-on-year the rate of growth in AMS stood at 7.7% in June against 8.3% in May and 11.8% in June last year.
We suggest that a visible decline in the growth momentum of AMS is expected to bust various bubble activities, which sprang up on the back of the previous increase in the growth momentum of money supply. 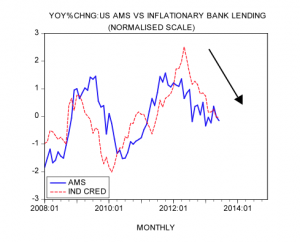 Remember that economic bust is about busting bubble activities. Beforehand it is not always clear which activity is a bubble and which is not.
Note that once a bust emerges seemingly good companies go belly up. Given that since 2008 the Fed has been pursuing extremely loose monetary policy this raises the likelihood that we have had a large increase in bubble activities as a percentage of overall activity.
Once the bust emerges this will affect a large percentage of bubble activities and hence banks that provided loans to these activities will discover that they hold a large amount of non-performing assets.
A likely further decline in lending is going to curtail lending out of "thin air" further and this will put a further pressure on the growth momentum of money supply.
In fractional reserve banking, when money is repaid and the bank doesn't renew the loan, money evaporates. Because the loan was originated out of nothing, it obviously couldn't have had an owner.
In a free market, in contrast, when money i.e. gold is repaid, it is passed back to the original lender; the money stock stays intact. Since the present monetary system is fundamentally unstable it is not possible to fix it. The central bank can keep the present paper standard going as long as the pool of real wealth is still expanding.
Once the pool begins to stagnate – or worse, shrinks – then no monetary pumping will be able to prevent the plunge of the system. A better solution is of course to have a true free market and allow the gold to assert its monetary role. As opposed to the present monetary system in the framework of a Gold Standard money cannot disappear and set in motion the menace of the boom-bust cycles.
We suggest that in the present monetary system which involves the existence of the central bank and fractional reserve banking it is not possible to make the monetary system more stable and immune to financial upheavals. As long as the Fed continues to tamper with interest rates and money supply we are going to have boom-bust cycles and financial upheavals.