END_OF_DOCUMENT_TOKEN_TO_BE_REPLACED

AUSTRALIANS all, let us become more productive – for we are getting older!

It doesn't quite have the same ring as the first line of the Aussie national anthem, does it? says Dan Denning in his Daily Reckoning Australia.

But even though the country is younger (and perhaps freer) than many other countries, it might not quite feel the same way about itself after reading parts of the government's latest Intergenerational Report, released yesterday.

The problem for Australia, like in all the Western world is that the population is ageing. You have fewer and fewer workers supporting more and more retirees. Those retirees are also drawing down their stock-market based savings vehicles. Their demand for benefits and income is increasing but their liquidating their asset portfolios to meet that demand.

This transfers the burden of national retirement from the stock market to the government. But as the government itself showed yesterday, the numbers don't add up. The ageing of the boomers leads to increased national spending on healthcare as percentage of Australian GDP. As you case see from the chart below, health, aged pensions, and aged care all expected to up as a percentage of government spending and GDP 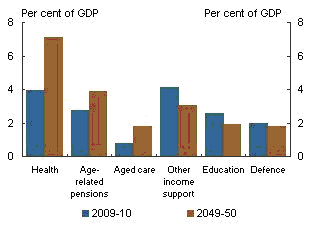 To pay those bills, you need more tax payers and higher taxes. Or you need more productivity. That's what the government is counting on. It hopes that increases it output per hour by Aussie workers will deliver higher GDP growth and thus higher government tax receipts.

But even so, the government itself projects a growing "fiscal gap", shown below as the annual Federal deficit as a percentage of GDP. 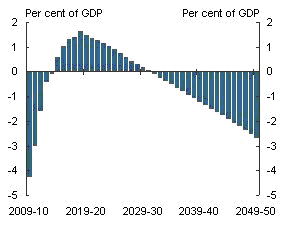 Granted, this fiscal gap isn't as bad as it is in other places like Japan and the United States. Japan's government deficits are even more pronounced, and its demographic math even more dismal. And the United States is also in its own kind of "reality gap" in which expectations of government by the population far exceed what America can afford.

The new Obama budget projects $3.8 trillion in spending a $1.4 trillion deficit. There isn't much in the way of spending cuts to programs what are considered "non-discretionary" (defense, social security, Medicaid, Medicare).

You could say America itself has a kind of national "mortgage stress". The future has been mortgaged for a higher standard of living today. But it was a national prosperity built on debt. It's all falling down. About the only good news...and only for Aussie stock investors...is that Obama's dollar-busting budget may drive higher asset prices for raw materials like Gold Bullion, energy, and other hard commodities.

But Australia and Australian investors also face a slow motion fiscal trap. The country receives a big boost from trade income with China and the rest of the commodity consuming world. The government can fund its deficits at reasonable interest rates for now. But what yesterday's report set up was a fight between two generations.

The Boomers will slowly liquidate share portfolios to meet rising health care expenses. And what they cannot pay out of pocket, you'd expect them to vote themselves. It's an effective strategy for shifting the retirement burden from the private sector to the public. We have no doubt that Super Funds will be compelled to own government bonds. And the government will sell bonds in order to finance its spending obligations to the Boomers.

Where does this leave the share market and the economy? Can the country really increase output per person and grow its way out of the fiscal gap? The highest paid and largest employing industries are financial services and resources. Are the Boomers going to migrate to those jobs?

In short, will you have 70-year old coal miners working in Queensland? What kind of work can an ageing population reasonably be expected to do? There are more questions to answer. But we're up against our daily deadline so we'll have to leave them until tomorrow...