END_OF_DOCUMENT_TOKEN_TO_BE_REPLACED

Don't let me hear you say life's taking you nowhere...

TRAIN WRECKS are tragic messes, writes Addison Wiggin in The Daily Reckoning. But as gruesome as they are...it's hard to avert one's eyes.

And let us tell you, the bloody wreckage following this catastrophe-in-progress is going to be horrific. Who knows why so many got onboard in the first place?

But what's done is done.

We're pretty squeamish, and as such, we've had our eyes covered. But we've peeked through an open finger every now and then – it's just too hard not to – and at last spotted this Gallup headline: "Three in Four US Workers Plan to Work Past Retirement Age".

The 35% that must continue to work is down from 36% in 2011. Onlookers might think the "track switch" has been flipped and that the wreck might be averted at the junction...but we'll call that 1% difference a wash; Gallup's 2013 percentages add up to just less than 100%.

A quick look at the Census data, though, confirms the coming collision. And it's as troubling now as it was predictable years ago...you just needed the stomach to sneak a peek. 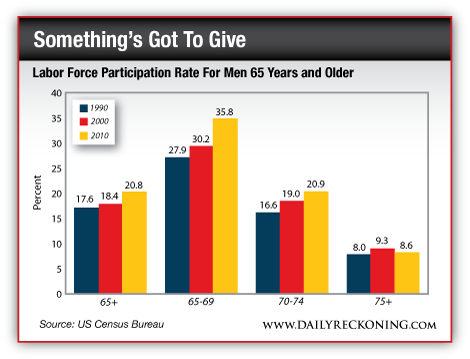 Over the past three decades, labor force participation by the 65-75 year age group has been steadily growing. Judging by that stat, the "golden years" retirees have come to expect seem a lot less golden. But we can't say we're surprised.

Attentive onlookers could have spotted the derailment from a mile away.

We first noted the demographic shifts that the US would face in the book we co-authored with Bill Bonner, Financial Reckoning Day. There, we wrote:

"For most of human history, the number of people aged over 65 was roughly 2% or 3% of the population. When Hammurabi, Julius Caesar or [even] Thomas Jefferson were alive, observes [author Peter] Peterson, there were very low odds (one person in every 40) of meeting a person aged 65 or over...

"According to the Organization for Economic Cooperation and Development (OECD) by 2030, the number of people aged 65 or over across the developed world will have increased by 89 million, whereas the number of working-age adults is projected to have decreased by 34 million."

Well, we still have 17 more years till 2030, but the data seem to bear the trend out. Americans who are 65 and older are growing as a total number of people and as a percent of the total population. 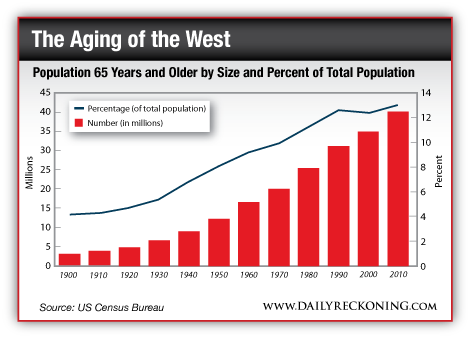 That's not all. Two weeks ago, CNBC reported that "high school and college students aren't the only ones looking for summer employment. With so many in the over-60 set out of work for lengthy periods, or looking for supplemental income, the jobs competition between teens and older workers may be heated."

With half of the nation's unemployed under 35, this could get ugly. It's tragic to watch...the passengers are trapped and there's nothing the conductor can do but say his prayers and look on with terror.

"In the struggle between myth and reality, the masses welcomed the myth that they would all be able to retire at someone else's expense. As in a Ponzi scheme or bubble market, the first to get into the system made a nice profit. They paid in trivial amounts, lived longer than expected and drew out far more than they had any right to do. Later participants will find it much harder to come out ahead. With longevity increasing and the retirement age decreasing, the financial burden placed on the world's working-age populations may be unbearable."

The brakes have been thrown on...metal is screeching and sparks are flying...but it won't be enough...and we can't bear to watch anymore.