END_OF_DOCUMENT_TOKEN_TO_BE_REPLACED

Latest US jobs data show things getting worse, not better...

Bloomberg, always ready to roll up its sleeves to help, ran a headline that said "Companies in US Added 67,000 Jobs in August."

While I haven't had time to go through the minutiae of the report, I find myself scratching my head at Mr. Market's rather positive reaction to the report, given the bullet points:

The fine folks at Chart of the Day just published their take on the numbers. You may see something cheerful in this snapshot, but if so, it eludes me... 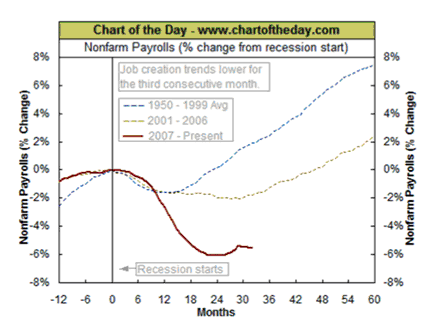 Interestingly, a week ago ADP, a company that does real-time payroll processing for about one in every six US workers – and whose data, because it is based on hard data and not surveying, has tended to be accurate – released its report for August employment. Based on ADP's data, they had forecasted that the construction industry had actually cut 33,000 jobs in August.

Their data pointed to an overall decline in the work force of 105,000 jobs, worse than the government's numbers that showed overall unemployment rose by 54,000 – moving the unemployment rate from 9.5% back up to 9.6%.

At all times, but especially ahead of an election as important as November's, you can count me skeptical in the extreme when it comes to government data. Especially when it flies in the face of the clear trends in motion. Even with the government's stimulus funds still coursing through the economy, in the second quarter US gross domestic product fell by more than half, to an annualized rate of just 1.6%. Without the government's supercharged spending, it's been calculated that actual GDP would have been halved again.

So, where are all these new private-sector jobs coming from?

The construction industry was reported to have hired 19,000 people – a good number of whom, I suspect, are working on government-subsidized projects. At least in this neighborhood – and everywhere else I've traveled over the summer – there are almost no new houses being built. But there are a lot of roads being paved, whether they need it or not.

It also was reported that 17,000 new temps were hired in August. Historically, the number of temporary workers rises throughout the duration of a recession. In fact, only when the number of temps decisively turns down, in conjunction with full-time employment turning up, can we begin to expect that the economy is on the road to recovery.

Health care also added a fair number of jobs, over 20,000. The nation's hospitals and medical facilities are dangerously understaffed – especially ahead of the pending nationalization of the industry and the added demand that will trigger – so this is a bright spot, of sorts.

And the mining industry added 8,000 jobs, as you would expect it to. All to the good, until the next round of legislation sends this and other "dirty" businesses back into retreat. (A major overhaul of the US mining regulations was temporarily shelved because the Democrats were concerned it would hamper Nevada senator Harry Reid's reelection chances. After the elections, expect it to resurface.)

However, even if you take the government's latest unemployment report at face value and accept that the private sector added 67,000 jobs, with overall employment falling again by "just" 54,000, the country still hasn't even begun the process of clawing back the more than 8.4 million jobs lost since this crisis hit.

And, given that the economy is being helped along through overt stimulus and the Fed's not-so-overt policy of maintaining abnormally low interest rates, conditions for a recovery are about as favorable as they're going to get.

As Bud Conrad explains in detail in the current edition of The Casey Report, these low interest rates simply can't continue. And when they start to go up, along with taxes as the Bush tax cuts expire, the faltering economy will be dealt another body blow.