END_OF_DOCUMENT_TOKEN_TO_BE_REPLACED

As well as cheap labor, developing countries have offered the benefits of cheap energy...

THERE ARE many complexities associated with the calculation of US energy expenditures against its GDP, writes Gregor Macdonald.

The chart below only records domestic consumption of energy. But you see, the United States is a country that does not bear the full cost of the externalities associated with its total consumption of goods: 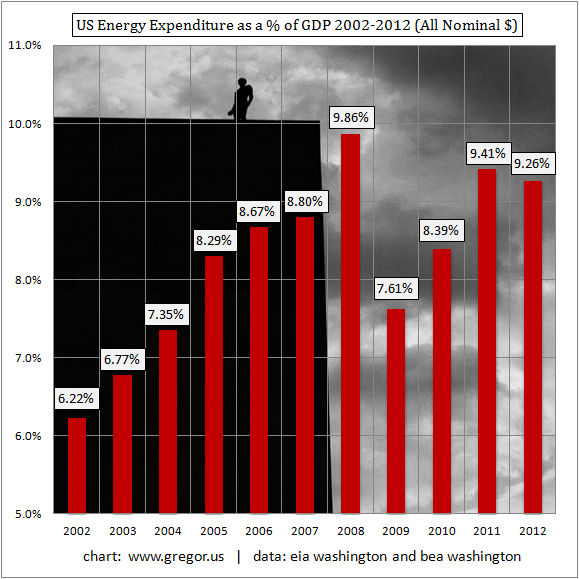 This leads most economists to an analytical error: they believe the US over the past two decades has been able to achieve higher levels of GDP with either reduced, or level, energy consumption. However, all US consumption and manufacturing that has been outsourced, primarily to Asia, is left unaccounted for – and that is not trivial. You may regard the coal-fired manufacturing of Asia, now required to produce our goods, as simply the offshored portion of our total BTU consumption.

It was not just cheap labor that OECD countries have sourced in the developing countries. It was the cheaper BTU, primarily coal, burned with little regulation and little regard for the environment, that we in the West now exploit.

And so you have to ask yourself a question: what if America was forced to produce GDP with the full and accurate accounting of our total energy consumption, repatriated from its "externality?" What would the calculation, in the above chart, show?

Well, the answer is certainly not lower than 9% of GDP.