END_OF_DOCUMENT_TOKEN_TO_BE_REPLACED

US Congressmen know what's necessary. But the chances of delivering it...?

He read it and underlined, highlighted, and scored it. The Senator Rob Portman took it off his hands and read it. They asked me to come to DC and meet a few Senators. You don't say no to such a request...

I flew to Washington and met with nine of them for about 90 minutes and Senator Cornyn (from Texas) privately beforehand for an hour. I offered him a copy of the book, but he said he was already reading it on the iPad he was carrying. I gave him one anyway.

Evidently, Coats and Portman had worked the room, because nine guys showed up more or less on time. Two Democrats, six Republicans, and an independent (Lieberman). Jon Kyl was there, as well as Gang of Six member Tom Coburn from Oklahoma.

Also Corker, Lugar, Coats, Portman, and Mike Lee, the Tea Party senator from Utah, who took the most notes. But there were a lot of them taking notes. And asking questions, some rather pointed. Overall, I was very impressed with the level of knowledge in the room and the candor.

I started by explaining what I meant by the debt supercycle and how deleveraging recessions are fundamentally different from business-cycle recessions, which is why we are not seeing a normal recovery. And it is happening all over the developed world.

I think I surprised them by jumping to Europe first, noting that Europe appeared to be imploding even as we were meeting. I made the point that we could see a banking and credit crisis coming from Europe that might be worse than the subprime crisis. I noted that it was not just Greece, Ireland, and Portugal. Spain and Italy have their own share of problems, and the markets have taken their interest rates up by 1% in just the last month, just as a large rollover of debt is coming due. 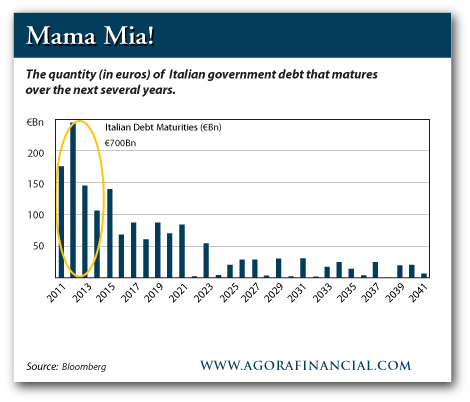 Then today I get this note from Bluemont Capital Advisors, written by Harald Malmgren, Global Economic Strategist, and Mark Stys, Chief Investment Officer. It is short but important, so I am going to quote it liberally:

Italian and Spanish interbank lending is freezing up. French Finance Ministry officials and banks have been in emergency meetings regarding Eurozone interbank market stress. IMF and EU officials are warning that France might also face downgrade if greater spending cuts are not made. Finance Ministry staff have been warned to be available 24/7 (irrespective of sacred August holidays!), as contagion may soon affect French banks and sovereign debt.

Italian and Spanish sovereign debt yields have resumed escalation this week. Moreover, the Italians had to cancel issuance of longer maturity debt, as demand was insufficient...

Meanwhile, US money market funds have been withdrawing from Eurozone bank commercial paper, leaving Eurozone banks with a big gap in availability of short-term funding and a severe shortage of Dollars.

In the background, the Fed has quietly advised the ECB and some other central banks that Congress has warned the Fed not to repeat the huge liquidity support to Europe and Asia that it provided in 2008. European officials believe the Fed would be less able to come to the rescue again with increased swap lines and direct loans to Eurozone banks, as it did post-Lehman.

Thus, the Eurozone appears to be entering into renewed crisis of breakdown in interbank trust and escalating borrowing costs for Italy and Spain, and maybe even France...It is increasingly possible that the ECB may not be able to function as lender of last resort on the scale required to cope with an interbank lending breakdown.

Demand for Dollars will likely escalate, while confidence in Eurozone financial institutions falls. This could force Eurozone banks to purchase Dollars in the open market and drive the Dollar higher.

I made some similar points to the Senators about why the Euro is going to parity if it survives. Then I went into my "Japan is a bug in search of a windshield" spiel, pointing out that the Yen will fall in half.

All this to say is that the bond markets are going to get spooked sooner than we are prepared for. If the US does not show up with a credible deficit-reduction program by the end of 2013, we could see interest rates rising even in the face of a deflationary recession. If we do nothing, we become Greece.

We need $10-12 trillion in cuts over ten years, which I explained would put us into a slow-growth-at-best, muddle-through economy with high unemployment and tough tax policies. I pointedly showed Senator Mike Lee why we could not cut spending too fast (as the Tea Party wants) unless we want "Depression 2.0" and 20% unemployment. It has to be my glide-path option.

It was a very sober group as we ended the meeting. They all politely thanked me for coming and talking frankly. But the Senators made it clear that cutting spending in a meaningful way was going to be very hard, and would take real commitment from them to get us through this. They all noted that their mail was running 100 to 1 against cutting Medicare. Every one of them.

They know that they cannot close the deficit gap just with the elimination of the Bush tax cuts. We are at an impasse. We need a massive restructuring of our entire tax code to be more encouraging of creating jobs. But that is another story for another week.

Looking to protect your wealth by Buying Gold? Cut your costs with BullionVault...